Thomas Tresham may refer to: 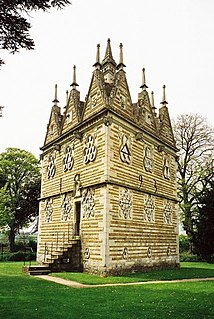 Sywell is a village and civil parish in the Borough of Wellingborough, Northamptonshire, England. At the time of the 2011 census, the population was 792. 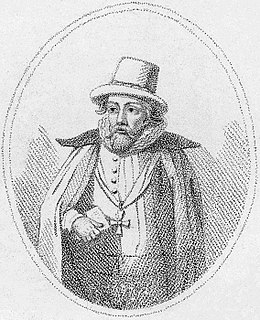 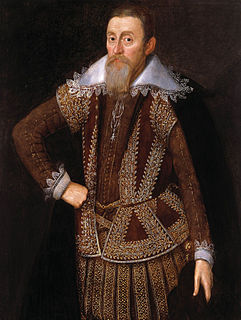 William Parker, 13th Baron Morley, 4th Baron Monteagle was an English peer, best known for his role in the discovery of the Gunpowder Plot. In 1605 Parker was due to attend the opening of Parliament. He was a member of the House of Lords as Lord Monteagle, the title on his mother's side. He received a letter: it appears that someone, presumably a fellow Catholic, was afraid he would be blown up. The so-called Monteagle letter survives in the National Archives, but its origin remains mysterious.

Rob Roy (1817) is a historical novel by Walter Scott. It is considered one of the Waverley novels, as the author identified himself on the title page as "by the author of Waverley".

Lyveden New Bield is an unfinished Elizabethan summer house in the parish of Aldwincle in East Northamptonshire, England, owned by the National Trust. It is a Grade I listed building.

William Burley was MP for Shropshire nineteen times and Speaker of the House of Commons of England.

John Williams, 1st Baron Williams of Thame was Treasurer of the King's Jewels, Lord Chamberlain of England (1553–1557) and Lord President of the Council of the Welsh Marches. He was summoned to parliament as Lord Williams of Thame on 17 February 1554.

Tresham is an English surname of Norman origins. The Treshams originally lived in Northampton. Near Northampton, is the village of Tresham, Gloucestershire.