Turner was born at Groombridge in the parish of Speldhurst, Kent. [2] In 1735 Turner's father took a shop in Framfield, Sussex. [2] Little is known about Turner's schooling, but his clear handwriting, practical mathematical abilities and wide intellectual interests suggest a reasonable level of education. [2] By the age of 21, in 1750, he had taken his shop in East Hoathly. [2]

Turner kept a diary for eleven years of his life, the first surviving entry of which is 21 February 1754. The diary served a number of purposes, including as an accounting book, a record of legal and property dealings, a place for religious reflection and as a means of describing Turner's everyday life. The failure of his marriage to live up to Turner's expectations is a frequent cause of low mood. [2]

Turner was an important figure in the community of East Hoathly. [2] As well as keeping a shop, he served as an undertaker, schoolmaster, surveyor and overseer of the poor. He helped people write wills, manage accounts and collect taxes. [2] He was a regular participant at vestry meetings and an occasional visitor to the Duke of Newcastle's Halland House. [2]

Aside from socialising and playing cricket, Turner was a keen reader. [2] As well as religious texts, he read works by William Shakespeare, John Locke, Joseph Addison and Samuel Richardson, among many others. Aside from consuming medical treatises, newspapers, periodicals and jestbooks, his interests included farriery, politics and travel. Turner sometimes read alone, but frequently read books aloud with his wife or his friends. [4]

The diary has never been published in full. David Vaisey's edition retains about one third of its content. [2] The edition also includes a family tree, short biographies of the diary's major characters and a list of Turner's reading material mentioned in Vaisey's extracts.. [5] The periodical Sussex Archaeological Collections printed some excerpts from the diary in 1859: the text is now in the public domain, and can be read online. [6] The surviving 111-volume manuscript is held in the Sterling Memorial Library at Yale University. [7]

Vaisey's edition of the diary also cites several documents in the East Sussex Record Office, such as account books and bastardy bonds, which were entirely written by Turner. [8] [9]

In the years after his second marriage, Turner was able to live comfortably. He bought his shop, and also purchased both land and East Hoathly's main public house. [2] He fathered seven children - one girl and six boys. Only three of the children lived to be older than twenty.

Turner died on 6 February 1793 and was buried in East Hoathly churchyard on 11 February. [2] His gravestone is on the right hand side of the church near the Clements Room, just in front of the table tomb of Philip Turner his son, and Philip's family. There is also a gravestone for Peter and Frederick, sons of Thomas and Mary Turner at the same place. A commemorative plaque marks his house.

The Battle of Lewes was one of two main battles of the conflict known as the Second Barons' War. It took place at Lewes in Sussex, on 14 May 1264. It marked the high point of the career of Simon de Montfort, 6th Earl of Leicester, and made him the "uncrowned King of England". Henry III left the safety of Lewes Castle and St. Pancras Priory to engage the Barons in battle and was initially successful, his son Prince Edward routing part of the baronial army with a cavalry charge. However Edward pursued his quarry off the battlefield and left Henry's men exposed. Henry was forced to launch an infantry attack up Offham Hill where he was defeated by the barons' men defending the hilltop. The royalists fled back to the castle and priory and the King was forced to sign the Mise of Lewes, ceding many of his powers to Montfort.

Mass-Observation was a United Kingdom social research organisation founded in 1937. Their work ended in the mid-1960s but was revived in 1981. The archive is housed at the University of Sussex. 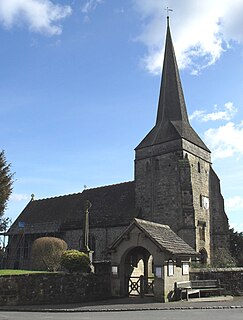 James Woodforde (1740–1803) was an English clergyman, known as the author of The Diary of a Country Parson. This vivid account of parish life remained unpublished until the 20th century.

East Grinstead was a parliamentary constituency in the Kingdom of England, the Kingdom of Great Britain, and the United Kingdom. It first existed as a Parliamentary borough from 1307, returning two Members of Parliament to the House of Commons elected by the bloc vote system. The borough was disfranchised under the Reform Act 1832, but the name was revived at the 1885 election when the Redistribution of Seats Act created a new single-member county division of the same name.

Sussex Marble is a fossiliferous freshwater limestone material which is prevalent in the Weald Clay of parts of Kent, East Sussex and West Sussex in southeast England. It is also called Petworth Marble, Bethersden Marble or Laughton Stone in relation to villages where it was quarried, and another alternative name is winklestone. It is referred to as "marble" as it polishes very well, although it is not a true marble, geologically speaking, as it has not been subject to metamorphism. The matrix is made up of the shells of freshwater gastropods and viviparus winkles, similar to but larger than those making Purbeck Marble. The pale calcified remains of the shells are in a matrix of darker material. West Sussex has a good concentration of thin layers of Sussex Marble; beds typically measure no more than 1 foot (0.30 m) thick. There are often two beds—the lower formed of smaller-shelled gastropods than the upper—with a layer of calcareous clay between them.

David George Vaisey CBE is a British librarian who was Bodley's Librarian from 1986 until 1996.

All Saints Church is an Anglican church in the hamlet of Highbrook in Mid Sussex, one of seven local government districts in the English county of West Sussex. The tiny settlement, in the parish of West Hoathly, was distant from the parish church in that village; two wealthy sisters accordingly funded the construction of a new church to serve the local population. Richard H. Carpenter and Benjamin Ingelow's stone building, with a prominent spire, opened in 1884 and was allocated its own parish. The "handsome" church, designed in the 14th/15th-century style of the Gothic Revival, has been listed at Grade II by English Heritage for its architectural and historical importance.

Walter Gale was the first schoolmaster of the Mayfield Charity School in Mayfield, East Sussex, now the Mayfield Church of England Primary School, serving from 1750 until 1771. Gale's diaries, which have been used by a number of historians to describe the nature of the English countryside, English schooling and even the social status of tobacco smoking, describe the life of an educated man spending his time drinking, smoking, attending church and reading books. It also describes odd bits of labour engaged in by Gale, including marking fabrics and agreeing to paint an illustration of the Ten Commandments at a church for two guineas.

St Margaret's Church is an Anglican church in the village of West Hoathly in Mid Sussex, one of seven local government districts in the English county of West Sussex. By the late 11th century, a simple single-room stone building existed on the high, open ridge upon which the village developed. A series of medieval expansions doubled its size by the 15th century, and the present building has changed little since then—despite a Victorian restoration overseen by architect R. H. Carpenter. A major addition was the heavily buttressed Perpendicular Gothic west tower, topped with a tall broach spire and containing a peal of ancient bells. The large, steeply terraced churchyard also serves as a public cemetery and has far-reaching views across the Weald. The original dedication to Saint Margaret of Antioch fell out of use for many centuries until a researcher rediscovered it. The church serves a large rural parish which was reduced in size in 1882 when two residents of the hamlet of Highbrook paid for an additional church to be built there. English Heritage has listed it at Grade I for its architectural and historical importance.

Southern Sandstone is a local name for the Ardingly Sandstone of southeast England, a soft sandstone of Cretaceous age separating the Tunbridge Wells Sands from the overlying Grinstead Clay. The outcrops in the Weald of Kent are the rock climbing crags closest to London and are probably the most heavily climbed in the UK.

Palmyra is an ancient Semitic city in present-day Homs Governorate, Syria. Archaeological finds date back to the Neolithic period, and documents first mention the city in the early second millennium BC. Palmyra changed hands on a number of occasions between different empires before becoming a subject of the Roman Empire in the first century AD.