The Hon. Thomas James Twisleton (also Twistleton) (1770–1824) was an English churchman, Archdeacon of Colombo from 1815 to 1824. [1] His early marriage has been considered a contribution to the use by Jane Austen of amateur theatricals as a plot device in her novel Mansfield Park . [2] He was also noted as an amateur cricketer.

He was born on 28 September 1770 at Broughton, Oxfordshire, the youngest son of Thomas Twisleton, later Thomas Twisleton, 13th Baron Saye and Sele. He was educated at Westminster School, where he was a scholar, played cricket and other sports, and participated in The Trifler, a periodical, with John Hensleigh Allen and others. [1] [3] He matriculated at St Mary Hall, Oxford on 2 February 1789, aged 18, graduating B.A. in 1794, and M.A. 1796. [1]

Twisleton was ordained in 1795, and became a curate at Charwelton. [4] He was short of money, but was offered livings, appointed in 1796 to Blakesley by Susannah Wight of Blakesley Hall, which he had for the rest of his life; and later to Broadwell with Adlestrop, in the gift of Chandos Leigh, his nephew. [3]

In 1802 Twisleton became secretary and chaplain to the British administration in Ceylon. He was appointed Archdeacon of Colombo in 1815, receiving the Oxford degree of D.D. in 1816. He died in Colombo, on 15 October 1824. [1]

Twisleton was mainly associated with Marylebone Cricket Club (MCC). [5] He made appearances in four known first-class cricket matches, from 1789 to 1796. [6]

Twisleton's first marriage was at age 18 or 19, the result of an elopement with the heiress Charlotte Anne Frances Wattrell. In May 1788, they had played together in an amateur performance, of Julia by Robert Jephson, at Freemasons' Hall, London, as Mentevole and Julia; and in September of that year ran away and were married in Scotland. [3] [7] [8] Twisleton already had acting experience, in theatricals at Adlestrop House, and the couple performed together, there and elsewhere, for a year or so, attracting public attention. A son was born to Charlotte on 5 June 1790. [8] Surviving issue of the marriage was the daughter Julia Eliza (1789–1832), who married Captain James Brown in 1808. [9]

A change of heart by Twisleton about acting with his wife, in early 1794, precipitated a change of direction in his life, involving taking an Oxford degree, and preparing for the Church. He experienced money problems, they separated, and were divorced in 1798. [8]

Baron Saye and Sele is a title in the Peerage of England held by the Twisleton-Wykeham-Fiennes family. The title dates to 1447 but it was recreated in 1603. Confusion over the details of the 15th-century title has led to conflicting order for title holders; authorities such as Burke's Peerage and Debrett's Peerage do not agree on whether or not the 1447 creation is still extant.

Adlestrop is a village and civil parish in Gloucestershire, England. It is recorded as Tedestrop in the Domesday Book. The name means "village of a person called Adel", with the Old English suffix thorp, which here has become "trop". In the 2011 census, it had a population of 120. 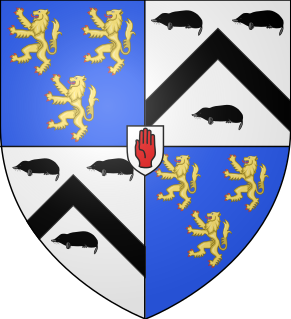 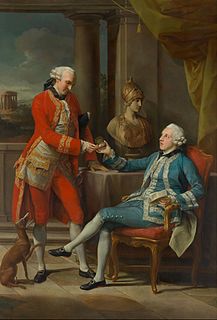 Sampson Eardley, 1st Baron Eardley FRS, known as Sir Sampson Gideon from 1759 until 1789, was the son of another Sampson Gideon (1699–1762), a Jewish banker in the City of London who advised the British government in the 1740s and 1750s, and his wife Jane, daughter of Charles Ermell of London.

Sir John Fiennes Twisleton Crampton, 2nd Baronet, KCB, was a British diplomat, minister to the United States from 1852 to 1856 and Minister to Russia from 1858 to 1860.

The Twisleton-Wykeham-Fiennes family are the descendants of the 16th Baron Saye and Sele who was born Frederick Benjamin Twistleton and adopted the surname Twisleton-Wykeham-Fiennes in 1849 by Act of Parliament. He was the grandson of Thomas Twisleton, 13th Baron Saye and Sele and inherited the barony from his first cousin William Thomas Eardley-Twisleton-Fiennes in 1847. The surname is frequently shortened to Fiennes. Members of the family include the explorer Ranulph Fiennes and the actors Ralph Fiennes, Joseph Fiennes, and Hero Fiennes-Tiffin. 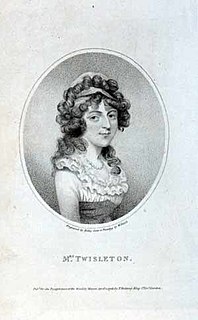 Charlotte Wattell was an English actress of the late 18th and early 19th-centuries and the first wife of the churchman Thomas James Twistleton.