Born in Asfordby, Leicestershire, England in 1863, Underwood emigrated to Canada when he was 20. [1] A carpenter by trade, he arrived in Winnipeg, Manitoba in 1883. At first, he worked as a farm hand. Two years later, he joined a Canadian Pacific Railway construction gang and was working in Craigellachie, British Columbia at the time of the last spike was driven to complete the transcontinental railroad. After the railroad was completed, he settled in Calgary.

Underwood spent the first two and a half years working for Jarrett-Cushing Lumber Company. Then he went into business for himself as a builder and contractor. Underwood was involved in the construction of many of the larger buildings in early Calgary. This includes the Bank of Montreal building and Burns Manor for Senator Pat Burns.

In 1887, Underwood married Catherine Graves. Together they had nine children, three of whom died in infancy. He was deacon of First Baptist Church for over 30 years, director of the YMCA for 25 years, and a member of the board of directors of Brandon College for ten years. His wife died in 1934 and he died on May 10, 1948, both in Calgary.

John Campbell Bowen was a clergyman, insurance broker and long serving politician. He served as an alderman in the City of Edmonton and went on to serve as a member of the Legislative Assembly of Alberta from 1921 to 1926, sitting with the Liberal caucus in opposition. He also briefly led the provincial Liberal party in 1926.

Wesley Fletcher Orr was a Canadian businessman, journalist, and politician. He was the eighth mayor of the city of Calgary, Alberta. 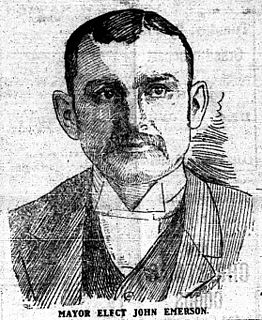 John Emerson was the 15th mayor of Calgary, Alberta. He was the mayor at the time that Alberta became a province of Canada, which was on September 1, 1905.

Michael Copps Costello was a Canadian printer, a medical graduate and the 19th mayor of Calgary, Alberta.

Robert Colin Marshall was an Alberta politician. He was the 20th mayor of Calgary, Alberta, 1919-1921 and a Member of the Legislative Assembly of Alberta (MLA).

David Milwyn Duggan was a Welsh-born Canadian politician who was the Mayor of Edmonton from 1920 to 1923, a member of the Legislative Assembly of Alberta, and a leader of the Conservative Party of Alberta.

Patrick Burns was a Canadian rancher, meat packer, businessperson, senator, and philanthropist. A self-made man of wealth, he built one of the world's largest integrated meat-packing empires, P. Burns & Co., becoming one of the wealthiest Canadians of his time. He is honoured as one of the Big Four western cattle kings who started the Calgary Stampede in Alberta in 1912.

Jonathan Joseph Lord was a Canadian politician and member of the Legislative Assembly of Alberta from Alberta, Canada.

George Harry Webster was a politician and transportation expert in Alberta, Canada. He served as the 22nd Mayor of the city of Calgary, Alberta from 1923 to 1926 then served as a member of the Legislative Assembly of Alberta from 1926 to his death in 1933. Webster was popularly known as the "Cowboy Mayor".

Andrew Davison was a Canadian politician.

William Somerville Edmiston was an architect and politician in present-day Alberta, Canada. He was a member of the Edmonton Town Council and for two terms, the mayor of Edmonton. 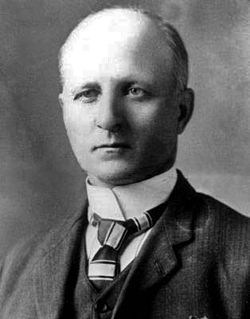 Burns Manor was the Calgary residence of Senator Pat Burns, a successful businessman who founded Burns Meat. It was located at 510 13th Avenue S.W. in the Beltline District of Calgary, Alberta. Construction started in July 1900 and was completed in January 1903. The property was torn down in May 1956 to make room for an expansion of the Colonel Belcher Hospital..

This is a timeline of the history of Edmonton, Canada.

William Hay was a Scottish architect who was actively working internationally from 1842 to 1887. A specialist in gothic architecture, he is primarily known for his work on several churches and cathedrals. His most famous structure is the Bermuda Cathedral in Hamilton, Bermuda which he designed in 1885. Construction of the cathedral began in 1886 and was completed seven years after Hay's death in 1905. He also designed some of the oldest buildings and structures in Toronto, Ontario, from 1853–1861, and was responsible for the restoration of St. Giles' Cathedral in Edinburgh from 1872–1884. His career exemplifies how the British Empire of the Victorian Era was united not only by military and political strength but also by professionals who took advantage of opportunities in its wide array of territories.

Edgerton Winnett Day was a Canadian politician and pioneer settler in the area that became the Canadian province of Alberta.