Sir Thomas Urquhart (1611–1660) was a Scottish aristocrat, writer, and translator. He is best known for his translation of the works of French Renaissance writer François Rabelais to English.

Urquhart was born to an old landholding family in Cromarty in northern Scotland. At the age of eleven he attended King's College, University of Aberdeen. Afterwards he toured the Continent, returning in 1636. In 1639, he participated in the Royalist uprising known as the Trot of Turriff; he was knighted by Charles I at Whitehall for his support. In 1641 he published his first book, a volume of epigrams. [1]

Urquhart's father died in 1642, leaving behind a large estate encumbered by larger debts. As the eldest son, Urquhart was from that time on harassed by creditors. He left for the Continent in order to economize, but returned in 1645 and published Trissotetras, a mathematical treatise. [1]

In 1648, Urquhart participated in the Royalist uprising at Inverness. He was declared a traitor by Parliament, though he doesn't seem to have suffered any other consequences. Two years later he marched with Charles II and fought in the Battle of Worcester. The Royalist forces were decisively defeated and Urquhart was taken prisoner. He lost all his manuscripts, which he had brought with him for safekeeping, and he had to forfeit all his property. He was held first at the Tower of London and later at Windsor, but he was given considerable freedom by his captors. The following year he published Pantochronachanon, a work of genealogy, and The Jewel, a defense of Scotland. In 1652, he was paroled by Cromwell and returned to Cromarty. Soon after he published Logopandecteision , his plan for a universal language, and his most celebrated work, his translation of Rabelais. [1]

Urquhart returned to the Continent some time after 1653, perhaps as a condition of his release by Cromwell. [1] Little is known of his life after this time. He died no later than 1660, because in that year his younger brother took up his hereditary titles.

There is a legend that Urquhart died in a fit of laughter on receiving news of the Restoration of Charles II.

Epigrams, Divine and Moral (1641)
Collections of epigrams were fashionable in the mid seventeenth century, but Urquhart's contribution to the genre has not been highly regarded. Most critics have concluded that the sentiments are largely banal and the versification inept.

Trissotetras (1645)
Trissotetras treats plane and spherical trigonometry using Napier's logarithms and a new nomenclature designed to facilitate memorization. Urquhart's nomenclature resembles the names medieval schoolmen gave the various forms of syllogism, in which the construction of the name gives information about the thing being named. (Urquhart would make use of the same idea in his universal language.) The resulting effect is, however, bizarre, and the work is impenetrable without the investment of considerable time to learn Urquhart's system. Although Urquhart was a formidable mathematician and Trissotetras mathematically sound, his approach has never been adopted and his book is a dead end in the history of mathematics.

Pantochronachanon (1652)
Subtitled "A peculiar promptuary of time," this work is a genealogy of the Urquhart family. In it, Urquhart manages to name each of his ancestors in an unbroken hereditary line from Adam and Eve all the way up to himself through 153 generations. This work has been the subject of ridicule since the time of its first publication, though it was likely an elaborate joke.

The Jewel (Ekskybalauron) (1652) ( ISBN   0707303273)
A miscellaneous work. It contains a prospectus for Urquhart's universal language, but most of the book is, as the title page says, "a vindication of the honor of Scotland," including anecdotes about many Scottish soldiers and scholars. It includes Urquhart's fictionalized life of the Scottish hero James Crichton (1560–82, "The Admirable Crichton"), Urquhart's most celebrated work outside of his Rabelais; this section has sometimes been reprinted separately.

Logopandecteision (1653)
This book contains another prospectus for Urquhart's universal language. Although Urquhart does not give a vocabulary, he explains that his system would be based on a scheme in which the construction of words would reflect their meanings. Logopandecteision also contains a polemic against Urquhart's creditors.

The Works of Rabelais (Books I and II, 1653; Book III, 1693)
This is the work for which Urquhart is best known. It is considered one of the best translations of any work into English.[ citation needed ] There is a perfect match of temperament between author and translator. Urquhart's learning, pedantry and word-mad exuberance proved to be ideal for Rabelais's work. It is a somewhat free translation, but it never departs from the spirit of Rabelais. The third book was edited and completed by Peter Anthony Motteux and published after Urquhart's death.

Urquhart's prose style is unique. His sentences are long and elaborate and his love of the odd and recondite word seems boundless [ citation needed ]. At its worst his style can descend into almost unintelligible pretension and pedantry ("a pedantry which is gigantesque and almost incredible", in the words of George Saintsbury), but at its best it can be rich, rapid and vivid, with arresting and original imagery. He coined words constantly, although none of Urquhart's coinages have fared as well as those of his contemporary Browne.

Urquhart appears as a major character in the novel A Hand-book of Volapük by Andrew Drummond. Urquhart's language proposal "The Jewel" as well as Volapük, Esperanto, and other constructed languages are prominent plot devices in the novel.

One of the characters in Robertson Davies' Cornish Trilogy claims to be a descendant of Urquhart. 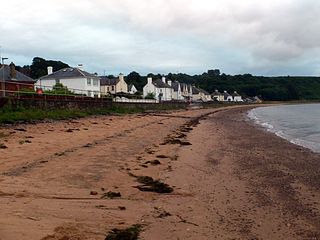 Cromarty is a town, civil parish and former royal burgh in Ross and Cromarty, in the Highland area of Scotland. In the 2001 census, it had a population of 719.

The Life of Gargantua and of Pantagruel is a pentalogy of novels written in the 16th century by François Rabelais, which tells of the adventures of two giants, Gargantua and his son Pantagruel. The text is written in an amusing, extravagant, and satirical vein, and features much crudity, scatological humor, and violence.

Peter Anthony Motteux, born Pierre Antoine Motteux, was an English author, playwright, and translator. Motteux was a significant figure in the evolution of English journalism in his era, as the publisher and editor of The Gentleman's Journal, "the first English magazine," from 1692 to 1694.

This article presents lists of the literary events and publications in 1660.

This article presents lists of the literary events and publications in 1653.

This article presents lists of the literary events and publications in 1652.

James Crichton, known as the Admirable Crichton, was a Scottish polymath noted for his extraordinary accomplishments in languages, the arts, and sciences before he was murdered at the age of 21.

John Carnegie, 1st Earl of Northesk (1611–1667), was a Scottish noble who supported the Royalist cause during the Wars of the Three Kingdoms.

Urquhart is a Highland Scottish clan.

Sir Robert Moray FRS was a Scottish soldier, statesman, diplomat, judge, spy, freemason and natural philosopher. He was well known to Charles I and Charles II, and the French cardinals Richelieu and Mazarin. He attended the meeting of the 1660 committee of 12 on 28 November 1660 that led to the formation of the Royal Society, and was influential in gaining its Royal Charter and formulating its statutes and regulations.

Craigston Castle is located near Turriff, in Aberdeenshire, Scotland, and is a historic home of the Urquhart family. It was built 1604–07 by John Urquhart of Craigfintry, known as the Tutor of Cromarty. The castle is composed of two main wings flanking the entrance and connected by an elevated arch, and surmounted by a richly corbelled parapet. There are bases for corner turrets near the top corner of each wing, but the turrets themselves do not appear to have ever been completed. The wood carvings in the drawing room depict biblical themes and Clan Urquhart heraldic artifacts.

Logopandecteision is a 1653 book by Sir Thomas Urquhart, detailing his plans for the creation of an artificial language by that name. The book is written in several parts, most notably including a list of the language's 66 unparalleled excellences; the rest is made up of rants against his creditors, the Church of Scotland, and others whose neglect and wrongdoings prevent him from publishing this perfected language. Where the book deals with the plan of Logopandecteision, it recalls his earlier work Eskybalauron.

Francis Lascelles (1612-1667), also spelt Lassels, was an English politician, soldier and businessman who fought for Parliament in the 1639-1652 Wars of the Three Kingdoms and was a Member of Parliament between 1645 and 1660.

Sir Thomas Lunsford was a Royalist colonel and Cavalier in the English Civil War.

John Hall (1627–1656), also known as John Hall of Durham, was an English poet, essayist and pamphleteer of the Commonwealth period. After a short period of adulation at university, he became a writer in the Parliamentary cause and Hartlib Circle member.

Glencairn's rising was a Royalist revolt in Scotland against the Protectorate of Oliver Cromwell from 1653 to 1654. It was led by William Cunningham, 9th Earl of Glencairn (1610–1664), who was given command of the Royalist forces in Scotland by Charles II. Initially successful it began to suffer divisions when John Middleton arrived to replace Glencairn as commander, resulting in a series of duels between officers. It was defeated when Thomas Morgan caught Middleton's army at Dalnaspidal on 19 July 1654. Although the rising was unsuccessful it forced a change of policy by the Cromwellian regime, which now looked for a reconciliation with former Royalists and Engagers.