Urwin worked as a trade union organiser and was divisional secretary of the Amalgamated Union of Building Trade Workers. He served as a councillor on Houghton-le-Spring Urban District Council, latterly as chairman from 1954 until 1955. [1]

A trade union is an association of workers forming a legal unit or legal personhood, usually called a "bargaining unit", which acts as bargaining agent and legal representative for a unit of employees in all matters of law or right arising from or in the administration of a collective agreement. Labour unions typically fund the formal organisation, head office, and legal team functions of the labour union through regular fees or union dues. The delegate staff of the labour union representation in the workforce are made up of workplace volunteers who are appointed by members in democratic elections.

Houghton-le-Spring is a town in North East England, which has its recorded origins in Norman times. Historically in County Durham, it is now administered as part of the local government district of the City of Sunderland, in Tyne and Wear. It is situated almost equidistant between the cathedral city of Durham 7 miles southwest and Sunderland about 7 mi (11 km) northeast. The town of Seaham and the North Sea lie about 5 mi (8 km) directly east. The villages and towns of Newbottle, Fencehouses and Hetton-le-Hole lie nearby. It has a population of 36,746.

The Borough of Great Yarmouth is a local government district with borough status in Norfolk, England. It is named after its main town, Great Yarmouth.

William Reid Blyton, Baron Blyton was a British Labour Party politician who served as Member of Parliament (MP) for Houghton-le-Spring in County Durham from 1945 to 1964.

Richard Bell was one of the first two British Labour Members of Parliament, and the first English one, elected after the formation of the Labour Representation Committee in 1900.

Roland Boyes was a British Labour Party politician, amateur photographer and, in retirement, a fundraiser for research into Alzheimer's disease.

Thomas Judson Brooks, was a British coal miner and politician who became a Labour Party Member of Parliament. A spiritualist, his main achievement was to lead the successful campaign to repeal the Witchcraft Act 1735.

Robert Richardson was a Labour Party politician in the United Kingdom. 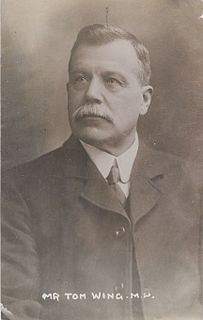 Thomas Edward Wing was a Liberal Party politician in the United Kingdom.

Fencehouses, or Fence Houses, is a small village within the parish of Houghton-le-Spring, on the edge of the City of Sunderland, England for the South with the North under the control of Durham County Council as part of County Durham.

Sir George Elliot, 1st Baronet, JP was a mining engineer and self-made businessman from Gateshead in the North-East of England. A colliery labourer who went on to own several coal mines, he later bought a wire rope manufacturing company which manufactured the first Transatlantic telegraph cable. He was also a Conservative Party Member of Parliament (MP).

William Thomas Mansfield was a British politician and trade unionist.