Born at Chipping Ongar, Essex, on 15 May 1748, he was son of the Rev. Thomas Velley of the town. [1] [2] He matriculated from St. John's College, Oxford, on 19 March 1766, and graduated B.C.L. in 1772. He became lieutenant-colonel of the Oxford militia, and was made D.C.L. of the university in 1787. He resided for many years at Bath, and devoted himself to botany, and especially to the study of algæ, collecting chiefly along the south coast. He was the friend and correspondent of Sir James Edward Smith, Dawson Turner, John Stackhouse, Sir Thomas Gery Cullum, Sir William Watson the younger, and Richard Relhan, and became a fellow of the Linnean Society in 1792. [3]

Jumping from a runaway stage-coach at Reading on 6 June 1806, Velley fell and suffered concussion, from which he died on 8 June. [3]

Sir James Edward Smith in 1798 gave the name Velleia , in his honour, to an Australasian genus of flowering plants. [3]

Velley's annotated herbarium, illustrated by dissections and microscopic drawings of grasses and other flowering plants, and especially of algæ, in eight folio volumes, was purchased from his widow by William Roscoe for the Liverpool Botanical Garden.

The herbarium is now held at Liverpool World Museum. [5] [6]

Velley's only independent work was Coloured Figures of Marine Plants found on the Southern Coast of England, illustrated with Descriptions, Bath, 1795, pp. 38, with five coloured plates. He was credited with four papers in the Royal Society's Catalogue (vi. 131), but the last was the work of Smith. [3] 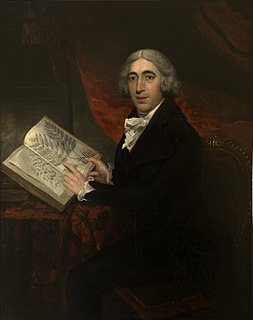 Richard Anthony Salisbury, FRS was a British botanist. While he carried out valuable work in horticultural and botanical sciences, several bitter disputes caused him to be ostracised by his contemporaries. 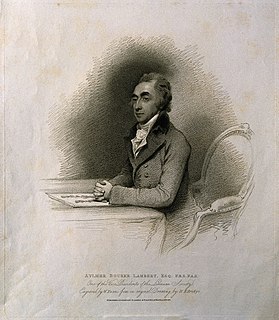 Aylmer Bourke Lambert was a British botanist, one of the first fellows of the Linnean Society.

John Stackhouse was an English botanist, primarily interested in spermatophytes, algae and mycology. He was born in Probus, Cornwall, and built Acton Castle, above Stackhouse Cove, Cornwall, in order to further his studies about the propagation of algae from their spores. He was the author of Nereis Britannica; or a Botanical Description of British Marine Plants, in Latin and English, accompanied with Drawings from Nature (1797).

Richard Vaughan was a Welsh bishop of the Church of England. 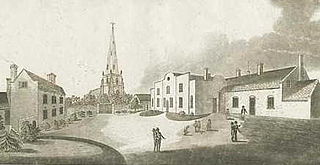 William Budworth was a schoolmaster at Brewood in Staffordshire, England. He taught several notable pupils, but he is most remembered for not employing Samuel Johnson as an assistant at Brewood Grammar School.

James Townsend Mackay (1775–1862) was a Scottish botanist who lived in Ireland.

Richard Mounteney (1707–1768) was an Irish judge and classical scholar.

Edward Upham (1776–1834) was an English bookseller, antiquarian and orientalist.

James Mangles was an officer of the Royal Navy, naturalist, horticulturalist and writer. He served during the French Revolutionary and Napoleonic Wars, rising to the rank of captain. In the post-war period, with his brothers Robert and George, who shared his interests in horticulture, botany and plant collection, James was actively involved in the botanical, horticultural and commercial life of early colonial Western Australia.

Robert Alfred Vaughan (1823–1857) was an English Congregationalist minister and author.

Major General Charles Edward Dutton Budworth, was a British soldier who served as an artillery officer during the Second Boer War and the First World War.

John Drew Salmon was an English ornithologist and botanist.

Edward Forster the Younger was an English banker and botanist.

Thomas Vautor was an English musician, known as a composer of madrigals.

Lilly Wigg was an English botanist.

The standard author abbreviation Velley is used to indicate this person as the author when citing a botanical name. [1]
This page is based on this Wikipedia article
Text is available under the CC BY-SA 4.0 license; additional terms may apply.
Images, videos and audio are available under their respective licenses.