Thomas William Fuller (May 3, 1865 – November 4, 1951), the son of Thomas Fuller, was a Canadian architect. Before his selection as Dominion Architect, Fuller designed a number of federal buildings in Dawson City, Yukon, some of which are now designated as National Historic Sites of Canada. These include the Post Office (1899); Court House (1900–01); Territorial Administration Building, 5th Avenue (1901); Public School (1901) which burned 1957; and Commissioner's Residence (1901).

He served as Chief Dominion Architect from 1927 to 1936, designing a number of prominent public buildings in Canada. Thomas W. Fuller designed a number of post offices:

His son, Thomas G. Fuller, founded Thomas Fuller Construction company in 1958 which built many public buildings in Ottawa as well as the sheltered harbour for the Britannia Yacht Club. [1] In 2002, the company was awarded a contract to renovate the Canadian Library of Parliament. [2] 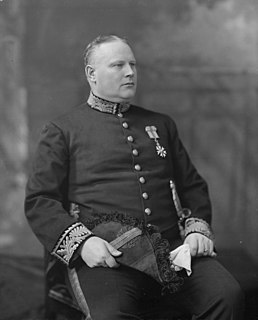 William Wallace Cory, CMG was Commissioner of the Northwest Territories from June 27, 1919 to February 17, 1931.

The Confederation Building is a gothic revival office building designed by Richard Cotsman Wright and Thomas W. Fuller in Ottawa, Ontario, Canada. Located just west of the Parliament Buildings at Bank and Wellington Streets, it is generally considered part of Parliament Hill.

Thomas Seaton Scott was an English-born Canadian architect. Born in Birkenhead, England he immigrated to Canada as a young man first settling in Montreal. He was hired by the Grand Trunk Railway and worked for them on a number of structures including the Union Station in Toronto and Bonaventure Station in Montreal. 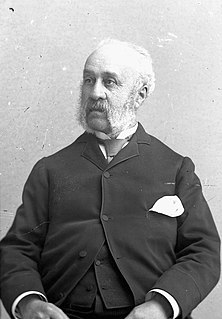 Ross and Macdonald was one of Canada's most notable architecture firms in the early 20th century. Based in Montreal, Quebec, the firm originally operated as a partnership between George Allen Ross and David MacFarlane from 1907 to 1912. MacFarlane withdrew from the firm in 1912, and Robert Henry Macdonald became a partner.

The Dominion Public Building is a five-storey Beaux-Arts neoclassical office building built between 1926 and 1935 for the government of Canada at southeast corner of Front and Bay streets in Toronto, Ontario, Canada. 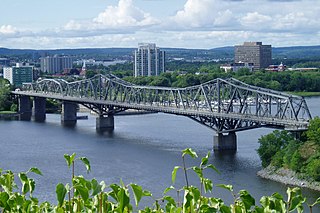 Dominion Bridge Company Limited was a Canadian steel bridge constructor originally based in Lachine, Quebec. From the core business of steel bridge component fabrication, the company diversified into related areas such as the fabrication of holding tanks for pulp mills and skyscraper framing.

Sir Andrew Thomas Taylor, JP, RCA, FSA, FRIBA was a British architect and councillor. He was born in Edinburgh, Scotland, and practised architecture in Scotland and London before emigrating to Montreal, Quebec, in 1883, where he designed many of the buildings of McGill University. He retired from architecture in 1904 and returned to London, where he served on London County Council from 1908 to 1926. He was knighted for his political services in 1926.

Richard Cotsman Wright (1860–1921) was a Canadian architect who served as Chief Dominion Architect from 1918-1927. As chief government architect he was responsible for many of the federal buildings constructed in this period. He embraced Chateauesque architecture and the Collegiate Gothic architecture. 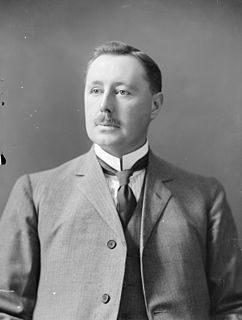 Charles D Sutherland (1879–1957) was a Canadian architect who served as Chief Dominion Architect from 1936-1947. Ewart apprenticed under John Albert Ewart from 1897 to 1901 and studied at the Ottawa School of Art. As chief government architect he was responsible for many of the federal buildings constructed in this period. Drawings for public buildings such as Post Office Buildings and Dominion Public Buildings designed by Sutherland and his staff during his tenure as Chief Architect of the Department of Public Works are now held at the National Archives of Canada. Joseph Charles Gustave Brault, (1886-1954) succeeded Charles D. Sutherland as Chief Architect of the federal Dept. of Public Works in 1947.

Cecil Burgess (1888–1956) was a Canadian architect. He was born in Walkden, Lancashire, England on 8 July 1888. He was educated Walkden, Lancashire, England. He articled to Henry Kirkby, an architect in Manchester, England. Cecil Burgess arrived in Ottawa, Ontario with his parents in 1905. He married Violet Hervey from Round Hill, Nova Scotia, in 1913. The couple had a son, Bernard W. Burgess of Montreal, and a daughter, Mrs. Barbara Joyce Greenwood.

Sumner Godfrey Davenport was an American-born Canadian architect who served as Chief Architect for the Royal Bank of Canada.