Thomas W. Gaehtgens (born June 24, 1940 in Leipzig) is a German art historian with special interest in French and German art and art history from the 18th to the 20th century. He was the founding director of the Deutsches Forum für Kunstgeschichte in Paris (Centre Allemand d'Histoire de l'Art de Paris; German Center for the History of Art, Paris) and was director of the Getty Research Institute in Los Angeles, California. [1]

In 1966, Gaehtgens completed his Ph.D. dissertation on the French Renaissance sculptor, Germain Pilon, at the University of Bonn. In 1972 he published his Habilitationsschrift about Joseph-Marie Vien at the University of Göttingen. For some years he worked as an adjunct professor at the Art History Seminar of this university. From 1979 to 1980, he spent some research time at the Institute for Advanced Study in Princeton, New Jersey. From 1980 until his retirement in 2006 he was Professor of Art History at the Free University of Berlin. [2]

Soon after his appointment to Berlin's University, Gaehtgens began turning his attention to pre-twentieth-century American art, which was not a primary field for art historians at German universities at that time. In 1985–86 he was a visiting scholar with the Getty Center for the History of Art and the Humanities. In 1988, this led to a major exhibition of American 18th- and 19th-century painting in Germany. In 1992, Gaehtgens took over the organization of the Twenty-Eighth International Congress of the History of Art in Berlin. From 1992 to 1996, Gaehtgens was president of the Comité International d'Histoire de l'Art (CIHA), which is supported by the Association of Art Historians. [3] In 1997, he founded, with German, French, and Swiss colleagues, the Deutsches Forum für Kunstgeschichte in Paris (Centre Allemand d'Histoire de l'Art de Paris), which organizes conferences, symposia, and workshops, undertakes research projects, and has published many books on art. From 1998 to 1999 he was Chaire européenne at the Collège de France. In 2004, he received an honorary doctorate at the Courtauld Institute of Art, London. [4]

In November 2007, he was appointed director of the Getty Research Institute (GRI) in Los Angeles, California. [5] [6] [7] According to the late James N. Wood, formerly president and CEO of the J. Paul Getty Trust, "Thomas Gaehtgens is uniquely qualified to serve as director of the Getty Research Institute. His contributions to our appreciation and understanding of the visual arts through his own scholarship, his creation of opportunities for others, and his realization of a wide range of publications, combined with his international experience and network of colleagues, assure the continuing dynamism of the GRI and promises new opportunities for its exceptional staff."

In 2009, Gaehtgens received the Grand prix de la francophonie of the Académie française [8] and in 2011 an honorary doctorate from the Paris-Sorbonne University. In 2011, he was elected a Fellow of the American Academy of Arts and Sciences. [9]

In 2009, he published the first issue of the Getty Research Journal, which features the work of established and emerging art historians, museum curators, and conservators around the world as part of the Getty's mission to promote critical thinking in the presentation, conservation, and interpretation of the world's artistic legacy. [10] In 2011/2012, he co-curated Pacific Standard Time: Art in L.A., 1945-1980, a scholarly collaboration of artists, curators, critics and over 60 cultural institutions across Southern California, coming together for six months to produce exhibitions that told the story of the birth of the Los Angeles art scene and how it became a major new force in the art world. [11] [12] [13]

According to James Cuno, "Professor Gaehtgens is a committed internationalist, at home in German, French, and English, with students and scholar colleagues around the world sharing his internationalist values and joining him on research and professional projects that advance our common understanding of our world's shared artistic legacy." [14] Gaehtgens retired from his position at the Getty in 2018. [15]

Thomas Gaehtgens is married to Barbara Gaehtgens, an art historian specializing in Dutch and French 17th century art. They have two children.

The Vienna School of Art History was the development of fundamental art-historical methods at the University of Vienna. This school was not actually a dogmatically unified group, but rather an intellectual evolution extending over a number of generations, in which a series of outstanding scholars each built upon the achievements of their forerunners, while contributing their own unique perspectives. Essential elements of this evolution became fundamental for modern art history, even if the individual methods can today no longer claim absolute validity.

Werner Spies is a German art historian, journalist and organizer of exhibitions. From 1997 to 2000, he was also a director of the Centre Georges Pompidou in Paris. According to Klaus Albrecht Schröder, director of the Albertina, Vienna, Spies is "one of the most influential art historians of the 20th century."

Julius Alwin Franz Georg Andreas Ritter von Schlosser was an Austrian art historian and an important member of the Vienna School of Art History. According to Ernst Gombrich, he was "One of the most distinguished personalities of art history".

Herman Grimm was a German academic and writer.

Ludwig Heinrich Heydenreich was a German art historian specialized in Italian Renaissance art. From 1947 to 1970, he served as director of the Zentralinstitut für Kunstgeschichte, Munich.

Willibald Sauerländer was a German art historian specializing in Medieval French sculpture. From 1970 to 1989, he was director of the prestigious Zentralinstitut für Kunstgeschichte, Munich. 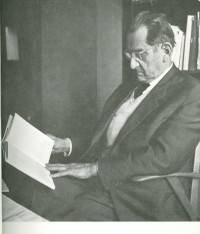 Michael Diers is a German art historian and professor of art history in Hamburg and Berlin.

Bettina Baumgärtel is a German art historian who is head of the painting collection of the Museum Kunstpalast in Düsseldorf. She is a leading authority on the art of Angelica Kauffman and founded the Angelika Kauffmann Research Project (AKRP), of which she is the director, in 1990. 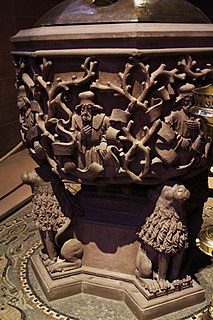 Branchwork or branch tracery is a type of architectural ornament often used in late Gothic architecture and the Northern Renaissance, consisting of knobbly, intertwined and leafless branches. Branchwork was particularly widespread in Central European art between 1480 and 1520 and can be found in all media. The intellectual origin of branchwork lies in theories in Renaissance humanism about the origins of architecture in natural forms and barely-treated natural materials.

Ulrich Pfisterer (born December 30, 1968 in Kirchheim unter Teck is a German art historian whose scholarship focuses on the art of Renaissance Italy. He is currently a professor of art history at Ludwig Maximilian University of Munich and the director of the Zentralinstitut für Kunstgeschichte. 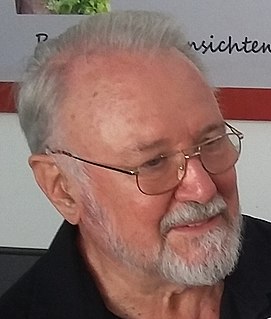