Lamont was born in Claverack, New York. His parents were Thomas Lamont, a Methodist minister, and Caroline Deuel Jayne. Since his father was a minister, they moved around Upstate New York a lot and they were not very wealthy. [1] He graduated from Phillips Exeter Academy in 1888, where he was editor of the school newspaper, The Exonian , as well as the school yearbook and literary magazine. He then attended Harvard. [1]

He also worked for the Albany Evening Journal , Boston Advertiser , Boston Herald , and New York Tribune , which paid only $25, while he was at Harvard.

At the Tribune, he received many promotions, including night editor and helping the financial editor, which gave him his first taste of the financial world. He left journalism because of the low pay and went into business [1]

He began working in business for Cushman Bros., which later became Lamont, Corliss, and Company, and turned it into a successful importing and marketing firm. It was an advertising agency that worked for food corporations. The company was in a bad financial status, but Lamont fixed it, and the company changed its name to Lamont, Corliss, and Company. He was partners with his brother-in-law, Corliss. His banking caught the attention of banker Henry P. Davison, who asked Thomas to join the new Bankers' Trust. He started as secretary and treasurer and then moved up to being Vice President and then was promoted to director. He rose to the vice presidency of the First National Bank. [1]

He was a member of the Jekyll Island Club on Jekyll Island, Georgia. There, along with J. P. Morgan Jr. and a few others, they secretly made a plan in 1910 there for a central bank, similar to the Federal Reserve System.

In 1918, he purchased the New York Evening Post, of which his brother, Hammond, had been managing editor a decade earlier, from Oswald Garrison Villard. After failing to make a profit, he sold the paper in January, 1922 to a syndicate that was headed by the paper's editor, Edwin F. Gay.

The company had also started an improvised system so that the Allies could buy supplies from them. In 1917, he joined the Liberty Loan Committee, which helped the treasury sell war bonds to Americans. He also served unofficially as an advisor to a mission to the Allies, led by Edward M. House, as requested by President Woodrow Wilson. [4]

Lamont not only advised the other countries but also went to them. Right before he was going to go to Europe, the Bolsheviks took power in Russia. He and the head of the American Red Cross, William B. Thompson, along with the approval of the British prime minister, Lloyd George, tried to convince America to aid the Bolsheviks so that Russia would stay in the war. However, they were unsuccessful.

Both he and Norman H. Davis were appointed as representatives of the Treasury Department to the Paris Peace Conference and had to determine what Germany had to pay in reparations. He drew up the Dawes Plan and the Young Plan to reduce the amount paid by Germany.

In the interwar period, he was a spokesman for J.P. Morgan because J.P. Morgan Jr. was retiring. He handled the press and defended the firm during hearings like the those of Arsene Pujo that investigated powerful Wall Street bankers. [1]

He was one of the most important agents for the Morgan investments abroad. A member of the Council of Foreign Relations, he was an unofficial advisor to the Wilson, Herbert Hoover, and Franklin Roosevelt administrations. [3]

Lamont later undertook a semiofficial mission to Japan in 1920 to protect American financial issues in Asia. However, he did not aggressively challenge Japanese efforts to build a sphere of influence in Manchuria; [5] indeed, he supported Japan's non-militaristic politics until late into the 1930s.

Ron Chernow won the National Book Award for his book The House of Morgan in which he claimed that Lamont had authored the infamous Japanese response to deceive the world about the Mukden incident, which was used as a pretext for Japan's invasion of Manchuria. That defied the expressed position of US government and the League of Nations that Japan, not China, was the aggressor.

Lamont was the chairman of the International Committee of Bankers on Mexico for which he successfully negotiated the De la Huerta-Lamont Treaty. He continued to chair the committee into the 1940s by a series of renegotiations of Mexico's foreign debt.

In 1926, Lamont, self-described as "something like a missionary" for Italian fascism, [6] secured a $100 million loan for Benito Mussolini. [6] Despite his early support, Lamont believed the Second Italo-Abyssinian War was outrageous. [3]

On Black Thursday in 1929, Lamont was acting head of J.P. Morgan & Co. In an attempt to stop the panic, he organized Wall Street firms to inject confidence back into the stock market through massive purchases of blue chip stocks.

Following the reorganization of J.P. Morgan & Co. in 1943, Lamont was elected chairman of the board of directors, after Morgan Jr. died.

Lamont became a generous benefactor of Harvard and Exeter once he had amassed a fortune, notably by funding the building of Lamont Library. At the end of World War II, Lamont made a very substantial donation toward restoring Canterbury Cathedral in England. His widow, Florence Haskell Corliss donated Torrey Cliff, their weekend residence overlooking the Hudson River in Palisades, New York, to Columbia University. It is now the site of the Lamont-Doherty Earth Observatory.

Upon Florence's death, a bequest established the Lamont Poetry Prize.

His son, Corliss, was a philosophy professor at Columbia University and an avowed socialist. Another son, Thomas Stilwell Lamont, was later vice-chairman of Morgan Guaranty Trust and a fellow of the Harvard Corporation. [7]

A grandson, Lansing Lamont, was a reporter with Time Magazine from 1961 to 1974. He published several books, [8] including You Must Remember This: A Reporter’s Odyssey from Camelot to Glasnost about his experiences covering the important events of the time, including the assassination of Robert Kennedy. Another grandson, Thomas William Lamont II, served in the submarine service on the USS Snook (SS-279) and died when the submarine sank in April 1945.

A great-grandson, Ned Lamont, was elected governor of Connecticut in 2018. 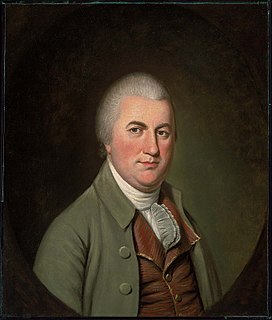 Nathaniel Gorham, his first name is sometimes spelled Nathanial) was a politician and merchant from Massachusetts. He was a delegate from Massachusetts to the Continental Congress, and for six months served as the presiding officer of that body. He also attended the Constitutional Convention and was one of the signers of the United States Constitution on September 17, 1787, in Philadelphia, Pennsylvania. 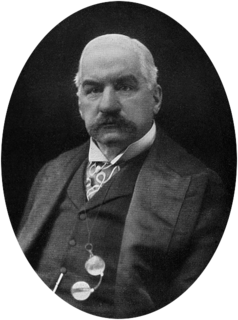 John Pierpont Morgan Sr. was an American financier and banker who dominated corporate finance on Wall Street throughout the Gilded Age. As the head of the banking firm that ultimately became known as J.P. Morgan and Co., he was a driving force behind the wave of industrial consolidation in the United States spanning the late 19th and early 20th centuries. 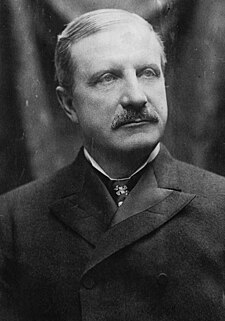 William Avery Rockefeller, Jr. was an American businessman and financier. He was a co-founder of Standard Oil along with his older brother John Davison Rockefeller (1839–1937). He was also a prominent member of the Rockefeller family. 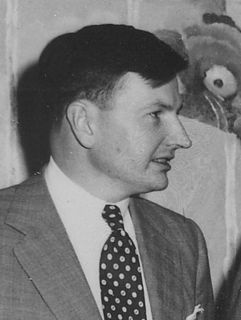 Harold Witter Bynner, also known by the pen name Emanuel Morgan, was an American poet, writer and scholar, known for his long residence in Santa Fe, New Mexico, and association with other literary figures there.

George Fisher Baker was an American financier and philanthropist. Known as the "Dean of American Banking," Baker was known for his silence in public. He made a huge fortune after the Civil War in railroads and banking, and at his death he was estimated to be the third richest man in the United States, after Henry Ford and John D. Rockefeller.

Bankers Trust was a historic American banking organization. The bank merged with Alex. Brown & Sons before being acquired by Deutsche Bank in 1999.

J.P. Morgan & Co. was a commercial and investment banking institution founded by J. P. Morgan in 1871. The company was a predecessor of three of the largest banking institutions in the world — JPMorgan Chase, Morgan Stanley, and Deutsche Bank — and was involved in the formation of Drexel Burnham Lambert. The company is sometimes referred to as the "House of Morgan" or simply "Morgan".

Corliss Lamont was an American socialist philosopher and advocate of various left-wing and civil liberties causes. As a part of his political activities he was the Chairman of National Council of American-Soviet Friendship starting from the early 1940s. 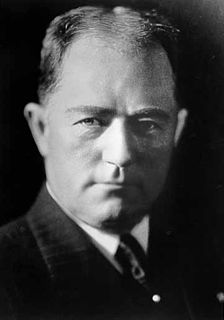 Henry Pomeroy Davison Sr. was an American banker and philanthropist.

Paul D. Hanson is an American biblical scholar who taught for 40 years at the Harvard Divinity School in Cambridge, Massachusetts.

Frank Arthur Vanderlip Sr. was an American banker and journalist. He was president of the National City Bank of New York from 1909 to 1919, and Assistant Secretary of the Treasury from 1897 to 1901. Vanderlip is known for his part in founding the Federal Reserve System and for founding the first Montessori school in the United States, the Scarborough School and the group of communities in Palos Verdes, California.

Henry Sturgis Morgan Sr. was an American banker, known for being the co-founder of Morgan Stanley and the President & Chairman of the Morgan Library & Museum.

Daniel Pomeroy Davison was an American banker who served from 1979 to 1990 as president of United States Trust, the oldest trust company in the United States, helping guide the company's transformation and growth through a focus on the richest of the rich, offering such personal services as walking the dogs of its top clients.

Benjamin Strong Jr. was an American banker. He served as Governor of the Federal Reserve Bank of New York for 14 years until his death. Strong exerted great influence over the policy and actions of the entire Federal Reserve System—and indeed over the financial policies of all of the United States and Europe. 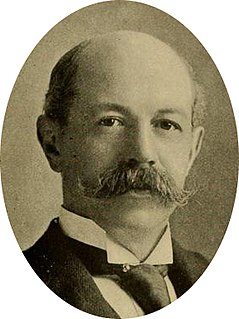 Edmund Cogswell Converse was an American businessman, banker and baseball executive. He was a steel industry executive and participated in mergers that unified much of the American steel industry. Later, continuing an association with J. P. Morgan, he was the first president of Bankers Trust. Late in his life, the U.S. Steel founder consolidated 20 farms to create the 1,481-acre (599 ha) tract known as Conyers Farm in Greenwich, Connecticut. Conyers Farm remained unoccupied for 15 years after Converse's death.

The Morgan family is a prominent American family and banking dynasty, which became prominent in the U.S. and throughout the world in the late 19th century and early 20th century. Members of the family amassed an immense fortune over the generations, primarily through the noted work of John Pierpont Morgan (1837–1913). The majority of the family resides in Northern Kentucky.

The Astor Trust Company was a historic American banking organization. The firm merged with Bankers Trust in 1917.