Thomas W. Libous (April 14,1953 –May 3,2016) was an American politician who served as New York State Senator for the 52nd Senate District,representing the counties of Broome,Tioga,Chenango and Delaware.

A Republican,Libous was first elected to the State Senate in 1988. He won a total of 14 terms in the Senate,eventually rising to the position of Deputy Majority Leader. An influential Albany dealmaker,Libous was notable for his advocacy for New York's Southern Tier. On July 22,2015,Libous forfeited his Senate seat when he was found guilty of lying to the FBI. His conviction was vacated following his death.

Libous was president of his senior class at Johnson City High School. [1] At a young age,he worked at his family's grocery store in Binghamton. [2] Libous graduated from Broome Community College in 1973 and from the State University of New York at Utica in 1975,where he earned a Bachelor of Science in Marketing and Finance with honors. [3] He worked on political campaigns for his uncle,Alfred Libous,who served as Mayor of Binghamton. [1]

Libous,a Republican,was elected to the Binghamton City Council in 1983 and won re-election in 1987. [1]

After having served on the Binghamton City Council, [2] Libous was first elected to the New York State Senate in 1988. [4] Libous was re-elected 13 times. [5] He succeeded Senator Warren M. Anderson,who had served as Senate Majority Leader. [4]

Libous was a powerful presence in Albany,and was known for his advocacy for New York's Southern Tier. [1] [6] He was also known for his ability to work with members of both parties and for his strong working relationship with Democratic Gov. Andrew Cuomo. [2] In 2008,Libous rose to the position of Deputy Majority Leader. [1] In 2009,he played a major role in a parliamentary coup [7] when Republicans unsuccessfully attempted to take control of the Senate with the help of two dissident Democrats. [8] Also in 2009,he became chair of the Senate Republican Campaign Committee;in that capacity,he helped the Republicans retake the Senate majority the following year. [1] in 2011,Libous voted against allowing same-sex marriage in New York during a Senate roll-call vote on the Marriage Equality Act,which narrowly passed 33-29. [9] [10] ,and also voted against the 2013 gun control law known as the New York SAFE Act. [6] Libous was an outspoken supporter of hydrofracking. [1]

In November 2014,despite having been indicted earlier in the year,Libous was re-elected for a fourteenth Senate term [5] and remained Deputy Majority Leader. [11] Libous forfeited his Senate seat when he was found guilty of lying to the FBI on July 22,2015. [4] [12]

Libous helped provide funding for an ice rink at Broome Community College and an events center at Binghamton University. He also supported the Ottawa Senators' American Hockey League affiliate's 2002 move to Binghamton,facilitating the provision of funding for arena renovations on multiple occasions. [1]

In 1998,Libous founded the Student Community Service Awards (SCSA) through a partnership with WBNG-TV and Broome-Tioga BOCES. Each year,the SCSA program awarded scholarships to high school seniors based on community volunteer work. [13]

One of Libous's final acts as Senator was to secure over $4 million in grant funds to construct the new shared office for the Broome County Industrial Development Agency,Broome County Chamber of Commerce,and related groups. [14]

In 2012,Libous was highlighted in a corruption trial for his role in attempting to help his son,Matthew,receive a job at Santangelo,Randazzo &Mangone,a law firm in Westchester County. As a result,an investigation was started, [15] and on July 1,2014,he was indicted on charges of lying to the FBI regarding the circumstances of his son's employment at the law firm. [16] [17]

Matthew Libous was charged with six counts of tax fraud in a related investigation. [18] [19] In January 2015,Matthew Libous was convicted on three counts of federal tax fraud by judge Vincent L. Briccetti of the Southern District of New York in a bench trial, [20] and in May 2015 he was sentenced to six months in prison. [21]

Thomas Libous was tried in July 2015. [22] On July 22,2015,after approximately six hours of jury deliberations,Libous was convicted of one count of lying to the F.B.I.;because of the felony conviction,he forfeited his Senate seat. [23] On November 24,2015,U.S. District Judge Vincent Briccetti sentenced him to six months of house arrest,two years of probation and a $50,000 fine. Libous was not sentenced to jail time due to his terminal cancer. [24] Libous appealed the conviction. On May 30,2017,the U.S. Court of Appeals for the Second Circuit vacated his conviction and ordered the return of the fine to his estate because Libous had been appealing the conviction at the time of his death. [25] [26]

Libous lived in Binghamton with his wife,Frances,who served as Vice Chair of the Workers Compensation Board. [27] The couple had two sons,Matthew and Nicholas. [2]

In 2009,Libous was diagnosed with terminal prostate cancer. [1] He underwent treatment while still serving as State Senator. In 2010,he founded "I Turned Pro" to encourage men over age 50 to talk to their doctors about the risks of prostate cancer. [28] 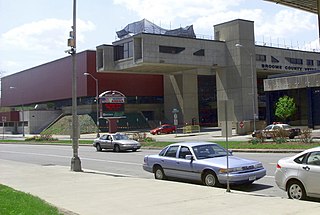 Visions Veterans Memorial Arena is a 7,200-seat multi-purpose arena in Binghamton,New York. The arena was completed in 1973,providing an entertainment venue for residents of the Greater Binghamton area. The arena has eight luxury suites that each hold 25 fans. A longtime home to minor league hockey,the arena is home to the Binghamton Black Bears of the Federal Prospects Hockey League.

William E. Baroni Jr. is an American Republican Party politician and law professor. He represented the 14th legislative district in the New Jersey Senate and General Assembly. In 2010,New Jersey Governor Chris Christie named Baroni to serve as the Deputy Executive Director of the Port Authority of New York and New Jersey.

Joseph Louis Bruno was an American businessman and Republican politician from upstate New York. Bruno served in the New York State Senate from 1977 to 2008 and was Senate Majority Leader from 1994 to 2008. Bruno was convicted of federal corruption charges in 2009,but his conviction was overturned on appeal and a subsequent retrial resulted in an acquittal.

Warren Mattice Anderson was an American lawyer and politician from New York. He was Temporary President and Majority Leader of the New York State Senate from 1973 to 1988. 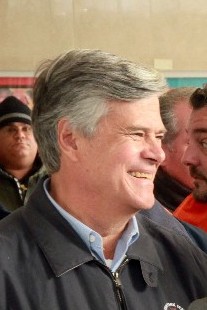 John L. Sampson is an American former politician and convicted felon. A Democrat,Sampson represented District 19 in the New York State Senate from 1997 to 2015. He is of Guyanese heritage. Sampson became Senate Democratic Leader in June 2009 and served as Senate Minority Leader from January 2011 to December 2012. Sampson forfeited his Senate seat when he was convicted of federal felony charges on July 24,2015. On January 18,2017,he was sentenced to five years in prison. 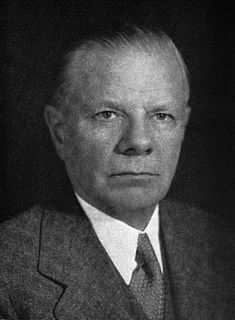 Bert Lord was an American politician from New York. A Republican,he served several terms in the New York State Assembly and New York State Senate,and was a member of the United States House of Representatives from 1935 until his death.

The 2002 United States Senate election in New Hampshire was held on November 5,2002. Incumbent Republican U.S. Senator Bob Smith was defeated in the Republican primary by U.S. Representative John E. Sununu. Sununu won the open seat,defeating Democratic Governor Jeanne Shaheen. As of 2022,this was the last time the Republicans won the Class 2 Senate seat in New Hampshire.

Matthew Tiberius Ryan was the mayor of Binghamton,New York from 2006 to 2013. He served two full terms in office,his eight-year tenure being ended by a term limit. He was elected,in 2005,on the tickets of the Democratic Party and the Working Families Party. He was re-elected in 2009,defeating his eventual successor,the Republican candidate Rich David.

Richard Claude "Rich" David is an American politician and journalist. He served as the mayor of Binghamton,New York from 2014 to 2021. He is running for the 52rd district of the New York State Senate in 2022.

Robert Gary Ortt II is an American politician who is a member of the New York State Senate. Ortt represents the 62nd district,which covers Niagara and Orleans counties. First elected in 2014,Ortt is a Republican.

Frederick J. Akshar II is an American Republican politician from the State of New York. Since November 2015,Akshar has represented District 52 in the New York State Senate.

Alfred J. "Al" Libous was an American politician who served as the Mayor of Binghamton,New York for three consecutive terms from 1969 until 1981.

James M. Turner was an American Republican Party politician who served in both houses of the New Jersey Legislature,serving one term in the New Jersey General Assembly from 1970 to 1972,and in the New Jersey Senate from 1972 until he was forced to resign from office in June 1973,after being convicted for his role leading a conspiracy to place drugs in the home of a Democratic Party political rival. Despite being evicted from his seat,Turner ran a quixotic campaign to be elected to a second term in the Senate.

New York's 52nd State Senate district is one of 63 districts in the New York State Senate. It has been represented by Republican Fred Akshar since a 2015 special election to succeed fellow Republican and convicted felon Thomas Libous.

Haley Anderson was an American nursing student at Binghamton University. She was murdered on March 8,2018 by fellow student Orlando Tercero in his apartment off-campus. Tercero fled to Nicaragua after strangling Anderson,was captured by Nicaraguan police,and was ultimately convicted of femicide. This was the first of two unrelated student murders that took place during Binghamton University's 2018 spring semester;the second was the on-campus murder of Joao Souza.