Thomas Woodnutt Miller (June 26,1886 – May 5,1973) was an American politician serving as a Republican U.S. Representative for Delaware's at-large congressional district. He was a veteran of World War I and a member of the American Legion,who served as a National Legislative Committee chairman.

Thomas Woodnutt Miller was born in Wilmington,Delaware,son of Governor Charles R. and Abigail Morgan Woodnutt Miller. He attended The Hotchkiss School and graduated from Yale University in 1908. He was initially employed as a steel roller by the Bethlehem Steel Company in 1908 and 1909.

Miller worked as secretary to U.S. Representative William H. Heald from 1910 until 1912,and during this period studied law in Washington,D.C. He was appointed by his father,Governor Charles R. Miller,to the position of Delaware Secretary of State from 1913 until 1915.

Miller was elected to the United States House of Representatives in 1914,defeating incumbent Democratic U.S. Representative Franklin Brockson. During this term,he served in the Republican minority in the 64th Congress. Seeking reelection in 1916,he lost to Democrat Albert F. Polk,a lawyer from Georgetown. Miller served from March 4,1915,until March 3,1917,during the administration of U.S. President Woodrow Wilson.

When the United States entered World War I in April 1917 (see American entry into World War I),Miller enlisted as a private in the infantry of the United States Army,and served in France with the Seventy-Ninth Division. He was cited by General John J. Pershing,commander of the American Expeditionary Forces (AEF),for "especially meritorious and conspicuous service" in the Meuse-Argonne Offensive and awarded the Purple Heart for his service. For this,he was promoted to lieutenant colonel and served until discharged in September 1919. Miller was a founder and incorporator of the American Legion and vice chairman of the Paris caucus in March 1919. He was also Alien Property Custodian from 1921 until 1925 and a member of the American Battle Monuments Commission from 1923 until 1926.

Miller served in the administration of United States President Warren G. Harding,but was convicted in 1927 of conspiring to defraud the U.S. government. [1] The conviction concerned Miller's service as Alien Property Custodian and the effort by Metallgesellschaft AG of Germany to overturn the U.S. government's confiscation of its interest in the American Metal Company during World War I. [2] [3] [4] He served 18 months in prison and was paroled in 1929 and pardoned by United States President Herbert Hoover in 1933.

At this point,Miller moved to Reno,Nevada,where he spent the rest of his life. There he became the founder of Nevada State parks system and served as chairman of the Nevada State Park Commission in 1935,1936,from 1953 to 1959,and from 1967 to 1973. He also continued his activity in veteran’s affairs as staff field representative of the United States Veterans' Employment Service from 1945 until 1957. He died in Reno,Nevada on May 5,1973,and was buried in the Masonic Memorial Gardens in Reno.

His nephew,Clement W. Miller was a U.S. Representative from California from 1959 until 1962.[ citation needed ]

Elections are held the first Tuesday after November 1. U.S. Representatives took office March 4 and have a two-year term.

The American Legion,commonly known as the Legion,is a nonprofit organization of U.S. war veterans headquartered in Indianapolis,Indiana. It is made up of state,U.S. territory,and overseas departments,and these are in turn made up of local posts. The organization was formed on March 15,1919,in Paris,France,by a thousand officers and men of the American Expeditionary Forces,and it was chartered on September 16,1919,by the United States Congress. The Legion played the leading role in the drafting and passing of the Servicemen's Readjustment Act of 1944,commonly known as the "G.I. Bill". In addition to organizing commemorative events,members provide assistance at Department of Veterans Affairs (VA) hospitals and clinics. It is active in issue-oriented U.S. politics. Its primary political activity is lobbying on behalf of interests of veterans and service members,including support for benefits such as pensions and the Veterans Health Administration. It has also historically promoted Americanism,individual obligation to the community,state,and nation;peace and good will. 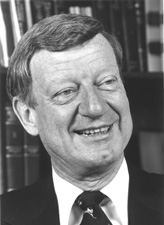 The Ohio Gang was a gang of politicians and industry leaders closely surrounding Warren G. Harding,the 29th President of the United States of America. Many of these individuals came into Harding's personal orbit during his tenure as a state-level politician in Ohio,hence the name.

The Military Order of the Loyal Legion of the United States (MOLLUS),or simply the Loyal Legion is a United States patriotic order,organized April 15,1865,by three veteran officers of the Army. The original membership was composed of members of the Army,Navy,or Marine Corps of the United States,who had served during the American Civil War as commissioned officers in Federal service,or who had served and thereafter been commissioned,and who thereby "had aided in maintaining the honor,integrity,and supremacy of the national movement" during the Civil War. 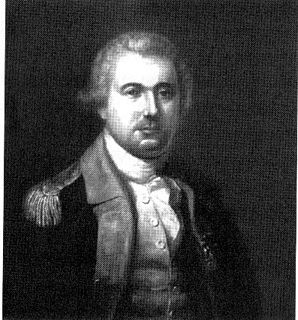 Major John Patten was a United States farmer and politician from Dover,in Kent County,Delaware. He was an officer of the Continental Army in the American Revolution,a Continental Congressman,and a member of the Democratic-Republican Party,who served in the Delaware General Assembly and as a United States Representative from Delaware.

Charles Robert Miller was an American lawyer and politician from Wilmington,Delaware. He was a member of the Republican Party,who served in the Delaware General Assembly and as Governor of Delaware.

Caleb Prew Bennett was an American soldier and politician from Wilmington,in New Castle County,Delaware. He was a veteran of the American Revolutionary War and the War of 1812,and a member of the Democratic Party who served as Governor of Delaware. 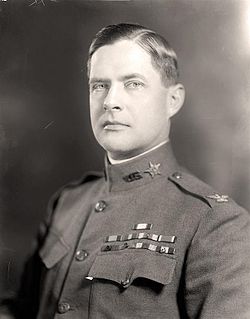 Ulysses Simpson Grant III was a United States Army officer and planner. He was the son of Frederick Dent Grant,and the grandson of General of the Army and American President Ulysses S. Grant.

Daniel Rogers was an American miller and politician from Milford,in Sussex County,Delaware. He was a member of the Federalist Party,who served in the Delaware General Assembly and as Governor of Delaware.

The Office of Alien Property Custodian was an office within the government of the United States during World War I and again during World War II,serving as a custodian to property that belonged to US enemies. The office was created in 1917 by Executive Order 2729-A under the Trading with the Enemy Act 1917 (TWEA) in order to "assume control and dispose of enemy-owned property in the United States and its possessions." 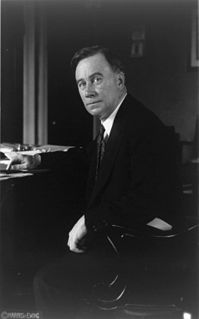 Francis Patrick Garvan was an American lawyer,government official,and long-time president of the Chemical Foundation,Inc. The Chemical Foundation was established to administer in the public interest 4,500 German patents associated with production of synthetic organic chemicals and related pharmaceuticals seized by the Office of Alien Property Custodian during the World War I. 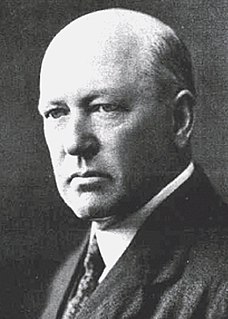 Bradley Webster Palmer was a prominent U.S. attorney and businessman. He was involved with the creation and development of multiple corporations,including the United Fruit Company,Gillette Safety Razor Corp.,and International Telephone &Telegraph Corporation. He was also part of the American delegation at the Paris Peace Conference following the First World War.

Royal Cleaves Johnson was a U.S. Representative from South Dakota and a highly decorated veteran of World War I while he was still a member of Congress. Despite voting against United States declaration of war on Germany,he took a leave of absence from Congress to enlist. He became a highly decorated veteran receiving the Distinguished Service Cross from the United States government. He also received the War Cross 1914–1918 from the French government. 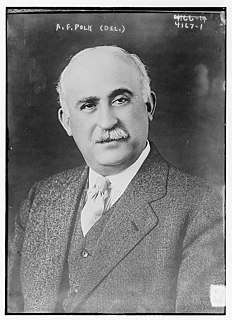 Albert Fawcett Polk was an American lawyer and politician from Georgetown,in Sussex County,Delaware and later,Wilmington,Delaware. He was a member of the Democratic Party,who served as U.S. Representative from Delaware.

Earle Dukes Willey was an American lawyer and politician from Dover,in Kent County,Delaware. He was a member of the Republican Party,who served as U.S. Representative from Delaware. 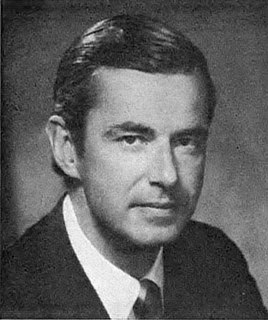 Philip Edward Ruppe is a former American politician from the U.S. state of Michigan and a member of the Republican Party. He served in the U.S. House of Representatives from 1967 to 1979 before running,unsuccessfully for the United States Senate in 1982. He is a Korean War veteran,having served as a lieutenant in the U.S. Navy. After leaving the U.S. House,Ruppe became active in business before running for election,without success,to the 103rd Congress. 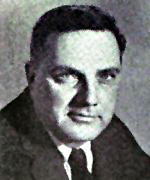 Clement Woodnutt Miller was an American politician who served as a U.S. representative from California from 1959 to 1962. He was killed in a plane crash during his second term in office.

Dallas Selwyn Townsend Sr. was an American Republican Party official who served as the Assistant United States Attorney General during the Eisenhower administration. He was the father of CBS Radio news reporter Dallas Townsend.

The 2018 Nevada gubernatorial election took place on November 6,2018,to elect the next Governor of Nevada. Incumbent Republican Governor Brian Sandoval,was ineligible to run for re-election,due to the absolute two-term limit established by the Nevada Constitution. Nevada is one of eight U.S. states that prohibits its governors or any other state and territorial executive branch officials from serving more than two terms,even if they are nonconsecutive.