Thomas W. Sutherland (c. 1817 – February 2, 1859) was an American lawyer and pioneer settler of Wisconsin and California. He was the first Village President of Madison, Wisconsin, was United States Attorney for Wisconsin for several years in the 1840s, was a member of the first Board of Regents of the University of Wisconsin, and was the last Alcalde (Mayor) of San Diego, California, prior to statehood. [1]

He was the eldest son of Joel Barlow Sutherland of Philadelphia, who had been a militia officer in the War of 1812 and served as a Member of Congress when Thomas was a child. [1]

Thomas W. Sutherland was born c. 1817 in Pennsylvania (he is listed as 33 in the 1850 San Diego Census). In 1835, he traveled to Indiana as a clerk for Henry Leavitt Ellsworth, who had just become commissioner of the U.S. Patent Office and had been tasked by the U.S. government to travel there to make a treaty with an indian tribe. Ellsworth returned east from here, but Sutherland, at age 18, traveled west, meeting a cousin near St. Louis. They traveled together, exploring parts of what is now Iowa and Minnesota. He followed a river route from the Saint Anthony Falls to the location that would later become Madison, Wisconsin, which at the time was still inhabited only by the Ho-Chunk. He spent some time living with the indians on the shore of Lake Monona, and determined that this would become his future home. He returned briefly to Philadelphia to make preparations, then returned to Madison to purchase his lot as soon as land became available under the newly organized Wisconsin Territory. [1]

He was admitted to the Pennsylvania Bar Association in 1839 and formed a legal partnership in Wisconsin with David Brigham with the endorsement of his father and several other notable politicians. In 1840, at the first session of court in Dane County, Sutherland was one of the first lawyers admitted to practice law in the territory, along with Edward V. Whiton (later Chief Justice of the Wisconsin Supreme Court), John Hubbard Tweedy, and Morgan Lewis Martin (later congressional delegates for the territory). [1]

In 1841 he married Joanna Hudson (born c.1822), the daughter of Philadelphia Doctor Edward Hudson. That same year, he was appointed United States Attorney for the Wisconsin Territory by President John Tyler and remained in that role until the inauguration of James K. Polk in 1845. In 1846, Madison was formally incorporated as a Village and Sutherland became the first President of the Village of Madison. That same year, he became one of the founders of the Wisconsin Historical Society and served as the first Secretary of the organization under President A. Hyatt Smith. [1]

In 1848, after Wisconsin became the 30th state, Sutherland was again named United States Attorney to fill the vacancy created by William Pitt Lynde, who had resigned after he was elected to Wisconsin's first congressional delegation. In that consequential year, the new state legislature formalized the state University and established the first Board of Regents. Sutherland was appointed to the Board of Regents by Governor Nelson Dewey, along with other early Wisconsin luminaries such as Edward V. Whiton, Alexander L. Collins, John H. Rountree, and Rufus King. [1]

In the spring of 1849, Sutherland left Wisconsin for California, which had just been annexed by the United States in the Mexican–American War. Sutherland settled in San Diego, where, in 1850, he served as the final Alcalde (Mayor) of San Diego prior to California becoming a state. That year, on May 5, he and his wife welcomed a son, Thomas, who is claimed to be the first "white" child born in the territory. He then became District Attorney for San Diego County in 1851. They moved to San Francisco in 1852, where Sutherland continued his law practice. He died on February 2, 1859, in Sacramento, California, and was buried at Lone Mountain Cemetery in San Francisco. [1]

Edward Bates was an American lawyer and politician. He represented Missouri in the United States House of Representatives and served as the United States Attorney General under President Abraham Lincoln. A member of the influential Bates family, he was the first Cabinet appointee from a state west of the Mississippi River 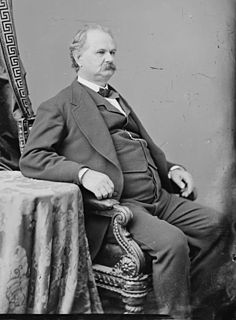 Coles Bashford was an American lawyer and politician who became the fifth Governor of Wisconsin, and one of the founders of the U.S. Republican Party. His one term as governor ended in a bribery scandal that ended in him fleeing Wisconsin, but he was later instrumental in the government of the newly formed Arizona Territory.

James Duane Doty was a land speculator and politician in the United States who played an important role in the development of Wisconsin and Utah Territory. 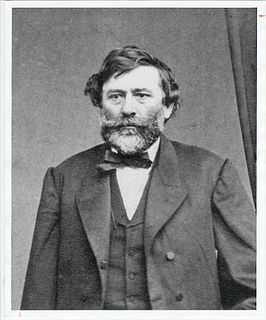 Agoston Haraszthy was a Hungarian-American nobleman, adventurer, traveler, writer, town-builder, and pioneer winemaker in Wisconsin and California, often referred to as the "Father of California Viticulture," or the "Father of Modern Winemaking in California". One of the first men to plant vineyards in Wisconsin, he was the founder of the Buena Vista Winery in Sonoma, California, and an early writer on California wine and viticulture.

Dennis Gahagan was an immigrant in the Mexican Pueblo de San Diego in territorial California, and early settler in the City of San Diego in the new U.S. state of California.

Burr W. Jones was an American lawyer, politician, jurist, and law professor. He was a member of the United States House of Representatives in the 48th Congress, and a justice of the Wisconsin Supreme Court.

Charles Clinton Ellsworth was a politician from the U.S. state of Michigan.

Edward Everts Browne was a U.S. Representative from Wisconsin.

Charles Hathaway Larrabee was a Member of the U.S. House of Representatives from Wisconsin for the 36th Congress (1859-1860). He was a lawyer and Union army officer in the American Civil War.

William Williams Chapman was an American politician and lawyer in Oregon and Iowa. He was born and raised in Virginia. He served as a United States Attorney in Iowa when it was part of the Michigan and Wisconsin territories, and then represented the Iowa Territory in the United States House of Representatives. He later immigrated to the Oregon Country, where he served in the Oregon Territorial Legislature. 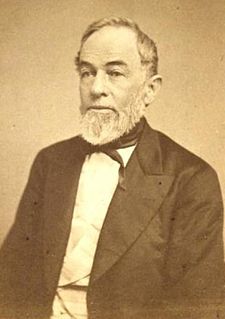 John Catlin was an American lawyer, politician, public official, and officer within the railroad industry. Catlin served as acting governor of the Wisconsin Territory from June 23, 1848, until March 3, 1849.

Thomas Sutherland may refer to:

Edward Vernon Whiton was an American lawyer, jurist, and Wisconsin pioneer. He was the first elected Chief Justice of the Wisconsin Supreme Court.

Winfield Smith was an American lawyer and politician. He was the 8th Attorney General of Wisconsin and served one term in the Wisconsin State Assembly.

Luther Swift Dixon was an American lawyer and judge, and was the 4th Chief Justice of the Wisconsin Supreme Court.

Elisha William Keyes was an American lawyer, politician, postmaster, and local judge. He was the 6th and 22nd Mayor of Madison, Wisconsin, and represented Dane County in the Wisconsin State Assembly. He was Postmaster of Madison from the end of the Civil War until the presidency of Theodore Roosevelt. He is most known for his eight years as Chairman of the Republican Party of Wisconsin and his work building a Republican Party political machine.

Stanley Wilmer Slagg was an American lawyer and politician from Edgerton, Wisconsin, who served two terms as a Republican member of the Wisconsin State Assembly, and afterwards repeatedly ran for various elective offices, either as a Progressive or as a Republican.

Chauncey Abbott was an American lawyer and politician. He served as the 5th Village President of Madison, Wisconsin, and represented central Dane County in the Wisconsin State Assembly during the 3rd Wisconsin Legislature. 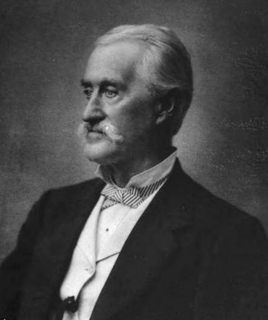 Alexander Lynn Collins was an American lawyer, judge, and politician. He was an important leader of the Whig Party in the early years of Wisconsin, serving as party chairman, nominee for United States Congress, for United States Senate, and for Governor of Wisconsin. He also served as a Wisconsin Circuit Court Judge and a member of the University of Wisconsin Board of Regents. In historical documents, his middle name is sometimes spelled "Linn" and he is sometimes referred to as "A. L. Collins."