Thomas W. Williams (ca. 1867–1931) was a former coal miner, school principal and church minister who was a member of the Los Angeles, California, City Council between 1929 and 1931. He was the first councilman elected under the 1925 city charter to die in office.

Williams was born around 1867 [1] in Utah and began work in a coal mine when he was "little more than 8, to support his mother, his father having died when he was a baby." He attended grammar and high schools at night and when he was 18 he became principal of a school in Lucas, Iowa. He became a minister of the Reorganized Church of Jesus Christ of Latter-day Saints, preached and traveled through Europe as a missionary. [2]

He was married in Pittsburgh, Pennsylvania, at age 25 to Addie May Cady. They had six children. After the Williamses moved to Los Angeles, they took up residence in the Silver Lake district. [2] [3]

Williams's first run for the City Council was in 1911, when he came in seventeenth in a field of eighteen at-large candidates, with the highest nine being elected.

In 1914 he was the California State Secretary for the Socialist Party of America and was speaking on behalf of an eight-hour day proposal on the California ballot. He appeared before a group of farmers in Orange County and told them that "if the law would injure California's prosperity the Socialists would not want to see it passed." [4]

As a Socialist, he was opposed to the direct-primary method of nominating candidates for public office. He said in 1915 that

The direct primary law permits every vice it is supposed to correct. . . . It relieves employers the necessity of hiring detectives to learn the political affiliation of employees. It makes perjurers of thousands, who register contrary to their convictions, in order to save their jobs. [5]

In the 1929 municipal election he ousted incumbent Douglas Eads Foster in the 12th District, which at that time consisted of Downtown Los Angeles-Hill Street and the Westlake-Silver Lake areas. [1]

Williams was the first City Council member to die in office after adoption of the new city charter in 1925—just a few weeks shy of the May 1931 election, in which Williams was not a candidate. Although the name of his wife, Addie Williams, was proposed as an interim council member, the City Council voted the idea down, 9–6, and the seat was left vacant until July 1, when the municipal election winner—Thomas Francis Ford—was installed. [7]

Charles Navarro Guarino was a Los Angeles, California, City Council member between 1951 and 1961 and city controller from 1961 to 1977.

Guy Vernon Bennett, also known as G. Vernon Bennett, was superintendent of schools in Pomona, California; a professor of education at the University of Southern California, and a Los Angeles city councilman from the 10th District from 1935 to 1951. A liberal, he was defeated for reelection after seventeen years in office in the wake of arrest on a morals charge. He was a Democrat.

Ebenezer Snapper Ingram was a Los Angeles City Council member representing the 10th District from 1927 until 1935. He was known as E. Snapper Ingram.

Charles Hiram Randall, known as Charles Randall, was a member of the U.S. House of Representatives, the California State Assembly and the Los Angeles City Council. He was the first council member to face a recall election under the present city charter. To date, he is the only candidate of the Prohibition Party to have been elected to the United States Congress.

Ernest L. Webster (1889–1954) was a pioneer automobile dealer in Los Angeles, California, and representative of the 3rd District on the Los Angeles City Council between 1927 and 1931.

Edward Lee Thrasher (1892–1971), who went by Edward L. Thrasher, was a builder, contractor and decorator who served on the Los Angeles, California, City Council between 1931 and 1942.

Thomas Francis Ford of California was a member of the U.S. Congress, an editor, a specialist in international trade and the only person ever sent to the Los Angeles City Council by a write-in vote. 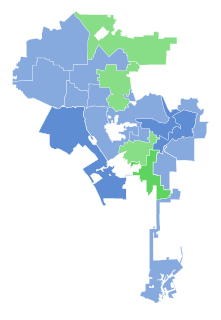 Howard W. Davis (1885–1959) was a member of the California State Assembly for two years and of the Los Angeles City Council for 16 years. He was indicted on charges of accepting bribes to influence his actions as a city official but was cleared on one count and never tried on the others, which were dismissed.

James Tilden Carroll in 1933 served 103 days as 12th District member of the Los Angeles City Council to fill out the unexpired term of Thomas Francis Ford, who had been elected to the U.S. Congress the preceding year.

Roy Hampton was an attorney, ex-Marine and former journalist who was a member of the Los Angeles, California, City Council from 1939 to 1943. Sheriff's deputies said he committed suicide in a Malibu motel in 1953.

Ed J. Davenport (1899–1953) and Harriett Davenport, a married couple, were both members of the Los Angeles, California, City Council; the wife succeeding her husband in the position after he died in 1953. It was the first of two such spousal turnovers in the history of the city. Harriett Davenport was the third woman council member in the city's history and the first to be appointed by the council.