Thomas Waite may refer to:

Le Fanu is a surname, also spelled LeFanu. Notable people with the name include

Henry Smith may refer to: 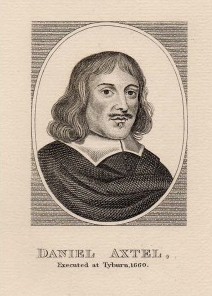 Colonel Daniel Axtell was captain of the Parliamentary Guard at the trial of King Charles I at Westminster Hall in 1649. Shortly after the Restoration he was hanged, drawn and quartered as a regicide. Apart from his participation in the regicide, he is best remembered for his participation in Pride's Purge of the Long Parliament.

Mayne may refer to:

Thomas or Tom Brennan may refer to:

Events from the year 1780 in Ireland.

Thomas or Tom Lister may refer to:

Thomas, Tommy, or Tom Hammond may refer to:

Tom Hayes may refer to:

Thomas Waite, also known as Thomas Wayte was an English soldier who fought for Parliament in the English Civil War, a Member of Parliament for Rutland, and one of the regicides of King Charles I.

Thomas Lyster may refer to:

The following are notable people associated with the name Waite.

Thomas Lodge was an English dramatist.

James Harington or Harrington may refer to:

The Joint Biosecurity Centre (JBC) is a scientific body which seeks to advise United Kingdom government policy as part of the response to outbreaks of COVID-19, such as on testing deployment, international travel, and the UK 'COVID-19 alert level'. Its existence was announced by Prime Minister Boris Johnson in May 2020. The body has been part of the UK Health Security Agency since the establishment of that agency on 1 April 2021.