Chief Little Crow (Sioux: Thaóyate Dúta; English: His Red Nation) of the Sioux had a son named Wawinape (Sioux: Wówinaphe English: Place of Refuge) in 1846. [1] [2] [3] Little Crow and Wawinape survived the Dakota War of 1862. They lived at Devil's Lake in Dakota territory. On June 10, 1863, they left to make a raid into Minnesota to get horses for their family. On July 3, 1863, Little Crow and his son were in the "Big Woods" picking strawberries. A settler named Nathan Lamson saw them and shot and killed Little Crow. His son Wawinape escaped and fled back to Devil's Lake. He was later captured, tried and sentenced to hang. He was sent to a prison camp in Davenport, Iowa. [3] [4] There he converted to Christianity and took the name Thomas Wakeman. [1] [3] He was pardoned in 1865 and settled in Dakota Territory. [3]

On April 27, 1879 Thomas Wakeman and his friends started the Koskadan Okodakiciye, a Young Man's Association, at Flandreau, Dakota Territory. [2] [3] In 1885, it was recognized by the national YMCA and its name was changed to Sioux YMCA. [2]

Wakeman contracted tuberculosis and died at Redwood Falls, Minnesota on January 13, 1886. [3] His son Jesse succeeded his father at the YMCA. [4] 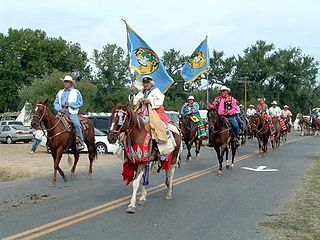 The Lakota are a Native American tribe. Also known as the Teton Sioux, they are one of the three tribes of the Great Sioux Nation. Their current lands are in North and South Dakota. They speak Lakȟótiyapi—the Lakota language, the westernmost of three closely related languages that belong to the Siouan language family. 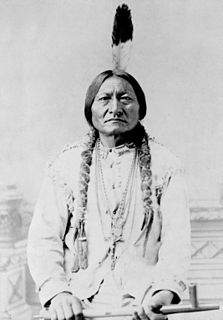 The Sioux are groups of Native American tribes and First Nations peoples in North America. The term is an exonym created from a French transcription of the Anishinaabe term "Nadouessioux", and can refer to any ethnic group within the Great Sioux Nation or to any of the nation's many language dialects. The modern Sioux consist of two major divisions based on language divisions: the Dakota and Lakota. 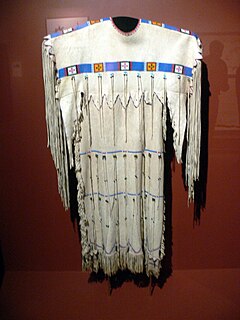 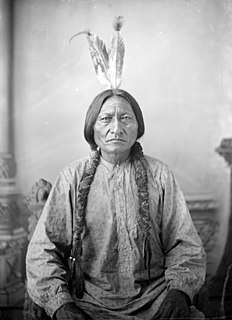 Sitting Bull was a Hunkpapa Lakota leader who led his people during years of resistance to United States government policies. He was killed by Indian agency police on the Standing Rock Indian Reservation during an attempt to arrest him, at a time when authorities feared that he would join the Ghost Dance movement. 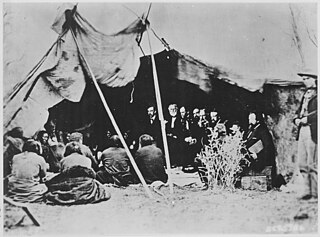 The Treaty of Fort Laramie was an agreement between the United States and the Oglala, Miniconjou, and Brulé bands of Lakota people, Yanktonai Dakota and Arapaho Nation, following the failure of the first Fort Laramie treaty, signed in 1851. 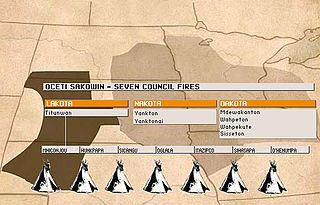 The Great Sioux Nation is the traditional political structure of the Sioux in North America. The peoples who speak the Sioux language are considered to be members of the Oceti Sakowin or Seven Council Fires. The seven member communities are sometimes grouped into three regional/dialect sub-groups, but these mid-level identities are not politically institutionalized. The seven communities are all individually members of the historic confederacy. In contemporary culture, the designation is primarily a linguistic, cultural, and for some, political grouping. 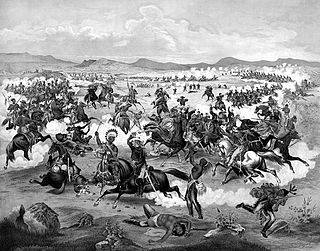 The Sioux Wars were a series of conflicts between the United States and various subgroups of the Sioux people which occurred in the later half of the 19th century. The earliest conflict came in 1854 when a fight broke out at Fort Laramie in Wyoming, when Sioux warriors killed several American soldiers in the Grattan Massacre, and the final came in 1890 during the Ghost Dance War.

The Upper Sioux Indian Reservation, or Pezihutazizi in Dakota, is the reservation of the Upper Sioux Community, a federally recognized tribe of the Dakota people, that includes the Mdewakanton.

Little Crow V was a chief of a band of the Mdewakanton Dakota people, who were based along the Minnesota River. His given name translates as "His Red Nation,". He was known as Little Crow because of a mistranslation by Europeans of his grandfather's name, Čhetáŋ Wakhúwa Máni.

Andrew J. Myrick, was a trader who, with his Dakota wife, operated stores in southwest Minnesota at two Indian agencies serving the Dakota near the Minnesota River.

The Lower Sioux Agency, or Redwood Agency, was the federal administrative center for the Lower Sioux Indian Reservation in what became Redwood County, Minnesota, United States. It was the site of the Battle of Lower Sioux Agency on August 18, 1862, the first organized battle of the Dakota War of 1862. Today it is a historic site managed by the Lower Sioux Community in partnership with the Minnesota Historical Society. The site contains an interpretive center, self-guided trails, and a restored 1861 stone warehouse which is listed on the National Register of Historic Places.

The Fort Laramie Treaty of 1851 was signed on September 17, 1851, between United States treaty commissioners and representatives of the Cheyenne, Sioux, Arapaho, Crow, Assiniboine, Mandan, Hidatsa, and Arikara Nations. The treaty was an agreement between nine more or less independent parties. The treaty set forth traditional territorial claims of the tribes as among themselves. The United States acknowledged that all the land covered by the treaty was Indian territory and did not claim any part of it. The boundaries agreed to in the Fort Laramie treaty of 1851 would be used to settle a number of claims cases in the 20th century. The Native Americans guaranteed safe passage for settlers on the Oregon Trail and allowed roads and forts to be built in their territories in return for promises of an annuity in the amount of fifty thousand dollars for fifty years. The treaty should also "make an effective and lasting peace" among the eight tribes, each of them often at odds with a number of the others.

Mdewakantonwan are one of the sub-tribes of the Isanti (Santee) Dakota (Sioux). Their historic home is Mille Lacs Lake in central Minnesota, which in the Dakota language was called Mde wakan. Together with the Wahpekute, they form the so-called Upper Council of the Dakota or Santee Sioux. 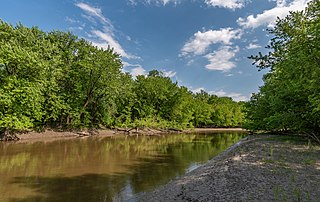 Pike Island, Dakota name Wita Tanka, is an island at the confluence of the Mississippi and Minnesota Rivers in the southwestern part of Saint Paul in the Twin Cities metropolitan area of Minnesota, U.S.. The island is now part of Fort Snelling State Park. It is a portion of the 100,000 acres (400 km2) of land purchased from the Mdewakanton Sioux Indians by Zebulon Pike in September 1805. Pike's Purchase was later to become Fort Snelling, Minneapolis, and Saint Paul. The U.S. government wanted to build a fort to protect American interests in the fur trade in the region, and Pike negotiated the treaty. Pike valued the land at $200,000, but the U.S. Senate later agreed to pay only $2000. 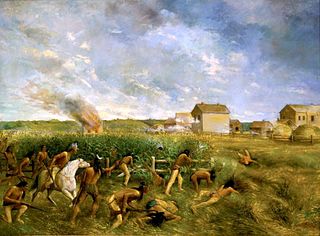 The Dakota War of 1862, also known as the Sioux Uprising, the Dakota Uprising, the Sioux Outbreak of 1862, the Dakota Conflict, the U.S.–Dakota War of 1862 or Little Crow's War, was an armed conflict between the United States and several bands of Dakota. It began on August 17, 1862, along the Minnesota River in southwest Minnesota, four years after its admission as a state. Throughout the late 1850s in the lead-up to the war, treaty violations by the United States and late or unfair annuity payments by Indian agents caused increasing hunger and hardship among the Dakota. During the war, the Dakota made extensive attacks on hundreds of settlers and immigrants, which resulted in settler deaths, and caused many to flee the area. Intense desire for immediate revenge ended with soldiers capturing hundreds of Dakota men and interning their families. A military tribunal quickly tried the men, sentencing 303 to death for their crimes. President Lincoln would later commute the sentence of 264 of them. The mass hanging of 38 Dakota men was conducted on December 26, 1862, in Mankato, Minnesota; it was the largest mass execution in United States history.

The Great Sioux War of 1876, also known as the Black Hills War, was a series of battles and negotiations which occurred in 1876 and 1877 between the Lakota Sioux, Northern Cheyenne, and the United States. The cause of the war was the desire of the U.S. government to obtain ownership of the Black Hills. Gold had been discovered in the Black Hills, settlers began to encroach onto Native American lands, and the Sioux and Cheyenne refused to cede ownership to the U.S. Traditionally, the United States military and historians place the Lakota at the center of the story, especially given their numbers, but some Indians believe the Cheyenne were the primary target of the U.S. campaign.

The Department of the Northwest was an Army Department created September 6, 1862 by the Union Army to put down the Sioux uprising in Minnesota. It was composed of the forces within the territory of the states of Wisconsin, Minnesota and Iowa, and the Nebraska and Dakota Territories . Nebraska Territory was detached to the Department of the Missouri on Oct. 11 1862.