Vice Admiral Thomas J. Walker (August 6, 1916 – May 8, 2003) was an officer of the United States Navy, who served as first commanding officer of the aircraft carrier USS Constellation.

Thomas Jackson Walker III [1] was born in Edgartown, Massachusetts (on the island of Martha's Vineyard), [2] on August 6, 1916, into a family with long maritime connections—three of his great-grandfathers had been whaling ship captains. After attending schools in Massachusetts and Florida, he attended the Marion Military Institute in Alabama. He then entered the United States Naval Academy, Annapolis, Maryland, with the class of 1939, and while there was stroke of the Academy crew and vice-president of his class for four years.

Following his commission as an ensign in June 1939, he joined the cruiser Minneapolis. In August 1941, he was detached for flight training at the Naval Air Station Pensacola, Florida. Designated Naval Aviator in March 1942, he joined the battleship New York as Senior Aviator. In this position, Walker spotted shore bombardment during the North African invasion at Safi, French Morocco and Casablanca and later participated in anti-submarine flights over convoys. He was awarded the Navy Commendation Medal "for his performance of duty on November 8, 1942, during the bombardment of Safi, French Morocco. Despite heavy enemy anti-aircraft fire he kept his ship supplied with accurate and timely reports without which the effect of the bombardment may not have been so effectively executed...."

Returning to the United States in 1943, he attended the Post Graduate School at Annapolis, where he completed the course in Aviation Ordnance in December 1944. He next reported to the Fire Control Desk in the Bureau of Aeronautics and remained there until July 1945. He was then assigned as Prospective Bomb Commander for the fourth atomic bomb at Los Alamos Scientific Laboratory. That bomb was never dropped due to the cessation of hostilities in August 1945.

Immediately after World War II, Walker served as Commanding Officer of Fighter Squadrons 17, 5-B and 61, during which time he was embarked with his respective squadrons aboard the newly commissioned carriers Valley Forge and Coral Sea. After service as Commanding Officer of the Naval Air Special Weapons Facility at the Sandia base, Albuquerque, New Mexico. In July 1951, he assumed command of Air Development Squadron 5. A group engaged in developing tactics for the delivery of special weapons from light aircraft at the Naval Ordnance Test Station at China Lake, California. In 1955 he became a student at the Industrial College of the Armed Forces in Washington, D.C.

Walker then began his association with the Polaris missile program as head of the Test Branch of the Fleet Ballistic Missile Program. He was temporarily assigned as Assistant to the Chief of Naval Operations, working on a classified project until June 1957. He then spent a year as Commanding Officer of the Fleet All-Weather Training Unit where he was concerned with training of carrier pilots for all weather flying and in the air defense of southern California.

In July 1958 Walker was back in Washington working with the Polaris as head of Ship Operations and Test Branch and Systems Development Analysis Chief. For his work with Polaris Captain Walker received the Navy Commendation Medal with Citation, which reads in part, "Captain Walker carried out his responsibilities with outstanding leadership and resourcefulness. Through his untiring efforts and high level of technical skill, he made a major contribution to the success of the Fleet Ballistic Missile System...."

In April 1960 Walker assumed his first ship command, the ammunition ship USS Nitro (AE-23). Six months later he was ordered detached from Nitro as Prospective Commanding Officer of Constellation, which was under construction at the New York Naval Shipyard, Brooklyn, New York. Walker assumed command of Constellation on October 27, 1961.

On November 9, 1963, Walker was promoted to Rear Admiral (lower half) and was relieved of command of Constellation by Captain Stanley W. "Swede" Vejesta.

From 1969 to 1971 Walker commanded the Naval Air Systems Command. [3] Walker retired from the Navy as a Vice Admiral, after serving as Commander of Naval Air of the Pacific Fleet (COMNAVAIRPAC). 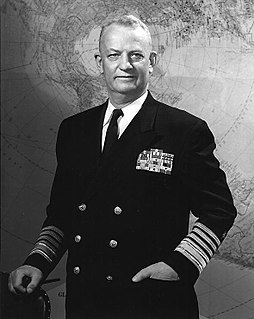 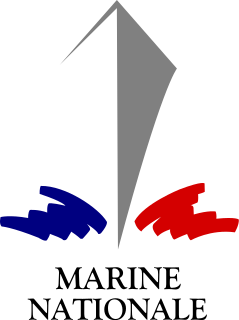 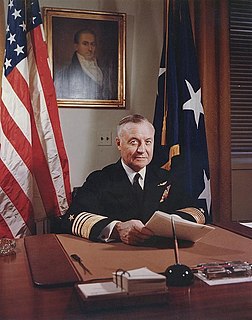 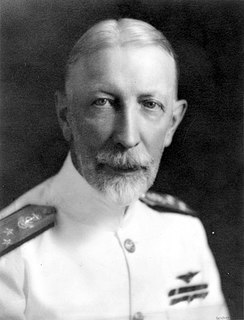 Joseph Mason "Bull" Reeves was an admiral in the United States Navy and an early and important supporter of U.S. Naval Aviation. Though a battleship officer during his early career, he became known as the "Father of Carrier Aviation" for his role in integrating aircraft carriers into the Fleet as a major part of the Navy's attack capabilities. 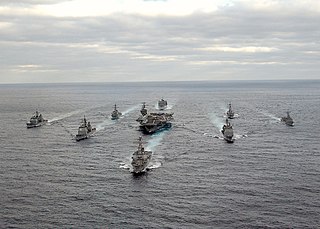 Admiral Arun Prakash, PVSM, AVSM, VrC, VSM is a former Flag Officer of the Indian Navy. He served as the Chief of the Naval Staff from 31 July 2004 to 31 October 2006 and as the Chairman of the Chiefs of Staff Committee from 31 January 2005 to 31 October 2006. He is one of India's most decorated naval officers.

The United States Navy (USN) is the maritime service branch of the United States Armed Forces and one of the eight uniformed services of the United States. It is the largest and most powerful navy in the world, with the estimated tonnage of its active battle fleet alone exceeding the next 13 navies combined, including 11 U.S. allies or partner nations as of 2015. It has the highest combined battle fleet tonnage and the world's largest aircraft carrier fleet, with eleven in service, two new carriers under construction, and five other carriers planned. With 336,978 personnel on active duty and 101,583 in the Ready Reserve, the U.S. Navy is the third largest of the U.S. military service branches in terms of personnel. It has 290 deployable combat vessels and more than 3,700 operational aircraft as of June 2019. 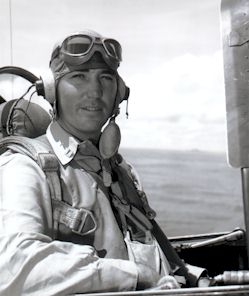 James D. "Jig Dog" Ramage was a Naval Aviator in World War II, the Korean War, the Vietnam War and the Cold War, and was a driving force in putting nuclear-capable attack aircraft aboard aircraft carriers. Before retirement he attained the rank of rear admiral.

Herbert Douglas Riley was a highly decorated officer in the United States Navy with the rank of Vice admiral. A Naval Academy graduate, he trained as naval aviator and distinguished himself first as Commanding officer of escort aircraft carrier USS Makassar Strait during the combats at Iwo Jima and Okinawa during World War II.

Vice Admiral Alfred Eugene Montgomery was an officer in the United States Navy who served in World War I and World War II. A graduate of the Naval Academy, he participated in operations in the Mexican waters during the Mexican Revolution. He trained for submarines, and became executive officer of the submarine USS E-1. In November 1914 he reported to the Mare Island Naval Shipyard where the new submarine USS F-1 was being fitted out, and served as its commander from June 1917 until it was lost on 17 December 1917.

Dick Henry Guinn was a highly decorated officer in the United States Navy with the rank of Vice admiral. A Naval Academy graduate, he distinguished himself as Pilot and Flight Leader of Fighter Squadron 94 during the sinking of Japanese cruiser Aoba in July 1945 for which he received Navy Cross, the United States military's second-highest decoration awarded for valor in combat.

Vice Admiral Elenjikal Chandy Kuruvila, PVSM, AVSM was a former Flag officer in the Indian Navy. He was the Fleet commander of the Western Fleet during the Indo-Pakistani War of 1971, for which he was awarded the Param Vishisht Seva Medal. He later led the Southern Naval Area and then served as the Chairman and Managing Director of Mazagon Dock Limited.