He graduated from the University of Manchester in 1962 and took the MD in 1975. He had a particular interest in liver disease. The major contributions in his M.D Thesis included 1) The development of new techniques to separate and identify Alkaline phosphatase (ALP) isoenzymes in blood and duodenal juice; 2) The first demonstration of a hormonal action on an enzyme from the same tissue (small intestine); 3) The first demonstration of an entero-hepatic circulation of a glycoprotein enzyme. He became Senior Physician in the University Department of Gastroenterology at Manchester Royal Infirmary where he founded the Liver Unit. He was president of the North of England Gastroenterology Society; Deputy Director of The British Liver Trust and Visiting Professor in the Department of Biomolecular Sciences at the University of Manchester Institute of Science and Technology (UMIST). [1] 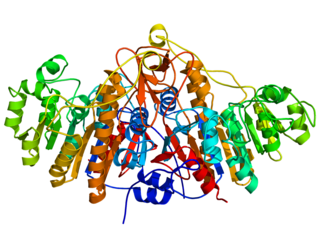 Alkaline phosphatase or basic phosphatase is a homodimeric protein enzyme of 86 kilodaltons. Each monomer contains five cysteine residues, two zinc atoms, and one magnesium atom crucial to its catalytic function, and it is optimally active at alkaline pH environments. ALP has the physiological role of dephosphorylating compounds. The enzyme is found across a multitude of organisms, prokaryotes and eukaryotes alike, with the same general function but in different structural forms suitable to the environment they function in. Alkaline phosphatase is found in the periplasmic space of E. coli bacteria. This enzyme is heat stable and has its maximum activity at high pH. In humans, it is found in many forms depending on its origin within the body – it plays an integral role in metabolism within the liver and development within the skeleton. Due to its widespread prevalence in these areas, its concentration in the bloodstream is used by diagnosticians as a biomarker in helping determine diagnoses such as hepatitis or osteomalacia.

Manchester Royal Infirmary is a hospital in Manchester, England, founded by Charles White in 1752. It is now part of Manchester University NHS Foundation Trust, sharing buildings and facilities with several other hospitals.

British Liver Trust is a charitable organisation in The United Kingdom which has a focus in the health of the liver. Based in the town of Bournemouth, the Trust is made up of 14 employed members of staff who are supplemented by voluntary workers.

Chronic liver disease in the clinical context is a disease process of the liver that involves a process of progressive destruction and regeneration of the liver parenchyma leading to fibrosis and cirrhosis. "Chronic liver disease" refers to disease of the liver which lasts over a period of six months. It consists of a wide range of liver pathologies which include inflammation, liver cirrhosis, and hepatocellular carcinoma. The entire spectrum need not be experienced. 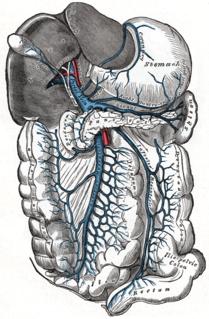 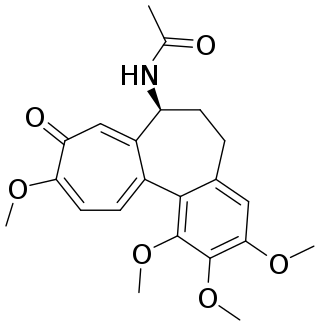 Colchicine is a medication used to treat gout and Behçet's disease. In gout it is less preferred to NSAIDs or steroids. Other uses include the prevention of pericarditis and familial Mediterranean fever. It is taken by mouth. 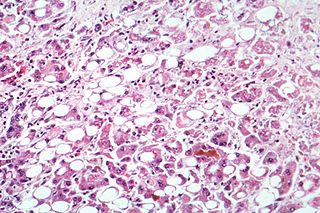 Alcoholic liver disease is a term that encompasses the liver manifestations of alcohol overconsumption, including fatty liver, alcoholic hepatitis, and chronic hepatitis with liver fibrosis or cirrhosis. 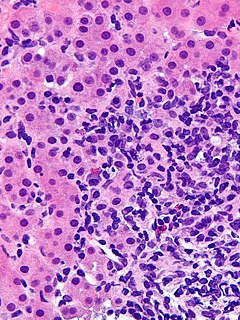 Autoimmune hepatitis, formerly called lupoid hepatitis, is a chronic, autoimmune disease of the liver that occurs when the body's immune system attacks liver cells causing the liver to be inflamed. Common initial symptoms include fatigue or muscle aches or signs of acute liver inflammation including fever, jaundice, and right upper quadrant abdominal pain. Individuals with autoimmune hepatitis often have no initial symptoms and the disease is detected by abnormal liver function tests. 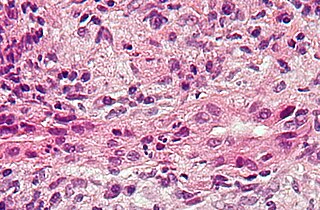 Primary biliary cholangitis (PBC), previously known as primary biliary cirrhosis, is an autoimmune disease of the liver. It results from a slow, progressive destruction of the small bile ducts of the liver, causing bile and other toxins to build up in the liver, a condition called cholestasis. Further slow damage to the liver tissue can lead to scarring, fibrosis, and eventually cirrhosis.

In medicine, specifically gastroenterology, the Child–Pugh score is used to assess the prognosis of chronic liver disease, mainly cirrhosis. Although it was originally used to predict mortality during surgery, it is now used to determine the prognosis, as well as the required strength of treatment and the necessity of liver transplantation. 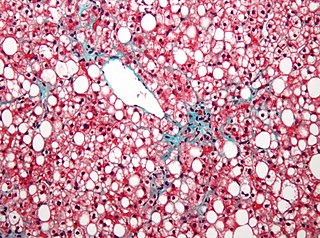 Liver disease is a type of damage to or disease of the liver. Whenever the course of the problem lasts long, chronic liver disease ensues. 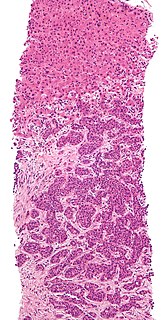 Liver biopsy is the biopsy from the liver. It is a medical test that is done to aid diagnosis of liver disease, to assess the severity of known liver disease, and to monitor the progress of treatment. 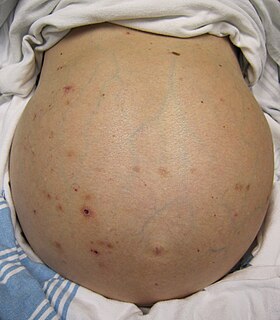 Liver failure is the inability of the liver to perform its normal synthetic and metabolic function as part of normal physiology. Two forms are recognised, acute and chronic. Recently a third form of liver failure known as acute-on-chronic liver failure (ACLF) is increasingly being recognized.

Hashem B. El-Serag is a Palestinian-American physician and medical researcher best known for his research in liver cancer, hepatocellular carcinoma (HCC) and the hepatitis C virus. 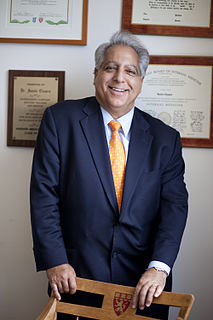 Cirrhosis, also known as liver cirrhosis or hepatic cirrhosis, is a condition in which the liver does not function properly due to long-term damage. This damage is characterized by the replacement of normal liver tissue by scar tissue. Typically, the disease develops slowly over months or years. Early on, there are often no symptoms. As the disease worsens, a person may become tired, weak, itchy, have swelling in the lower legs, develop yellow skin, bruise easily, have fluid build up in the abdomen, or develop spider-like blood vessels on the skin. The fluid build-up in the abdomen may become spontaneously infected. Other serious complications include hepatic encephalopathy, bleeding from dilated veins in the esophagus or dilated stomach veins, and liver cancer. Hepatic encephalopathy results in confusion and may lead to unconsciousness. 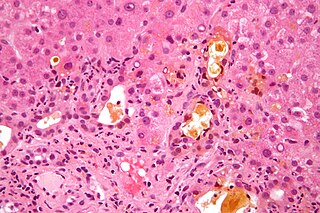 Scott L. Friedman is an American scientist, professor and physician who works in the field of hepatology. Friedman has conducted pioneering research into the underlying causes of scarring, or fibrosis, associated with chronic liver disease, by characterizing the key fibrogenic cell type, the hepatic stellate cell His laboratory has also discovered a novel tumor suppressor gene, KLF6 that is inactivated in a number of human cancers including primary liver cancer. Friedman is the Fishberg Professor of Medicine, and Chief of the Division of Liver Diseases, Mount Sinai School of Medicine in New York. Friedman has two children, a son, Leor Friedman, and a daughter, Yael Friedman.

Detlef Schuppan is a German biochemist and physician. He focuses on the diagnosis and treatment of coeliac disease and wheat sensitivity, fibrotic liver diseases and the immunology of chronic diseases and cancer. He is the director of the Institute of Translational Immunology and a professor of internal medicine, gastroenterology, and hepatology at the Medical Center of the Johannes Gutenberg University of Mainz in Germany. He directs the outpatient clinic for coeliac disease and small intestinal diseases. He is also a professor of medicine and senior visiting scientist at Harvard Medical School.

Badri Nath Tandon is an Indian gastroenterologist, hepatologist, medical researcher and academic, and the Chairman and Senior Consultant of Gastroenterology, at Metro Hospitals and Heart Institute, Noida. He is a former Professor and Head of Department of Gastroenterology and Human Nutrition Unit at the All India Institute of Medical Sciences, Delhi (AIIMS) and a former Director and Senior Consultant of Hepatology and Gastroenterology at Pushpawati Singhania Research Institute for Liver, Renal and Digestive Diseases, New Delhi. He is a recipient of several awards including Sasakawa WHO Health Prize and Jubilee Medal of the RAMS. The Government of India awarded him the third highest civilian honour of the Padma Bhushan, in 1986, for his contributions to medicine.

Shiv Kumar Sarin is an Indian gastroenterologist, hepatologist, medical researcher and writer and a former chairman of the Board of Governors of the Medical Council of India. He is the director of Institute of Liver and Biliary Sciences (ILBS), the first dedicated institution for advanced research on liver diseases and a deemed university under G. B. Pant Hospital, New Delhi. His contributions are reported behind the founding of the School of Hepatology of the Asian Pacific Association for study of Liver (APASL), which is housed at ILBS campus. He is a recipient of the Shanti Swarup Bhatnagar Prize, the highest Indian award in the science category. The Government of India awarded him the third highest civilian honour of the Padma Bhushan, in 2007, for his contributions to Indian medicine.

Paolo Caraceni is an Italian Associate Professor of internal medicine and rheumatology at the University of Bologna.