Thomas Washburne (c. 1963 – ) is a Republican member of the Indiana House of Representatives, representing the 64th District since 2013. [2] In 2017, Washburne announced that he would not be running for reelection to the State House. [3]

The Indiana House of Representatives is the lower house of the Indiana General Assembly, the state legislature of the United States state of Indiana. The House is composed of 100 members representing an equal number of constituent districts. House members serve two-year terms without term limits. According to the 2010 census, each State House district contains an average of 64,838 people.

Thomas Washburne was born around 1963 and comes from Princeton, Indiana. He has five children. [4] He resides in Inglefield, Indiana.

Princeton is a city in Patoka Township, Gibson County, Indiana, United States. The population was 8,644 at the 2010 census, and it is part of the greater Evansville, Indiana, Metropolitan Area. The city is the county seat of and the largest city in Gibson County.

Inglefield is a neighborhood within the northeastern part of the town of Darmstadt, Indiana, the second-largest city in Vanderburgh County, Indiana, just north of Evansville along U.S. Route 41.

An attorney, Washburne has worked for multiple law firms and represented two Indiana members of the US Congress, including United States Representative John Hostettler, as their chief of staff. Washburne is currently an attorney at Old National Bank in Evansville, Indiana. [5] 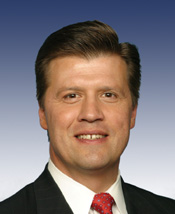 John Nathan Hostettler in an American politician who served in the United States House of Representatives from January 3, 1995, to January 3, 2007, representing the Indiana's 8th congressional district. He lost his reelection bid for a seventh term to Democratic challenger Brad Ellsworth in the 2006 midterm election, ending a twelve-year congressional career.

Washburne was reelected to his seat in the Indiana House of Representatives in 2014 after running unopposed in the republican primary and in the general election.

Washburne spent the 2015 legislative session pushing for more severe capital punishments for specific aggravators as chair of the House Courts and Criminal Code Committee. Senate Bill 385, [7] which passed the Senate and has moved on to the House, would allow for defendants to receive the death penalty or a conviction of life without parole if they are charged of committing murder on a school grounds or in a place of religious worship. Washburne, who is a strong supporter of capital punishment, says that both of those situations warrant being added to the list of aggravators, which already includes defendants charged with dismembering a body. [8] [9]

Washburne also voted for Indiana's version of the Religious Freedom Restoration Act, which was signed into law by Indiana Gov. Mike Pence on April 2, 2015. [10] He supports the law, which protects Indiana businesses and business owners' freedom of religion and does not allow for interference from state and local government. Washburne says it's important that citizens of Indiana have religious freedoms, even those that others "might be appalled by." [11]

Suzanne Crouch is an American politician who serves as the 52nd and current lieutenant governor of Indiana, since January 2017. She previously served as the 56th state Auditor of Indiana.

B. Patrick Bauer is a Democratic member of the Indiana House of Representatives, representing the 6th House District since 1970. His district consists primarily of the city of South Bend in St. Joseph County in northern Indiana.

Gail Riecken is a Democratic member of the Indiana House of Representatives, representing the 77th District since 2009. She was a candidate for Mayor of Evansville, the third-largest city in the state, in the 2015 election. 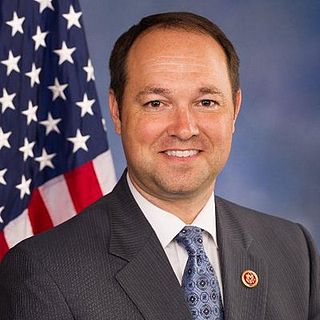 John Richard Gregg is an American businessman, attorney, author, and politician from Indiana. He was a state representative in the Indiana House of Representatives from 1986 to 2003, serving as Majority Leader from 1990 to 1994, Minority Leader for a term, and as the 85th and longest-serving Democratic Speaker of the Indiana House from 1996 to 2003.

Larry Dean Bucshon is an American politician and physician who has been the U.S. Representative for Indiana's 8th congressional district since 2011. He is a member of the Republican Party.

Mark B. Messmer is a Republican member of the Indiana State Senate, representing the 48th district since November 19, 2014. Messmer is a former member of the Indiana House of Representatives, representing three terms for the 63rd district from November 18, 2008 to November 18, 2014. He previously served on the Holy Family School Board from 2001 to 2004. He served as its president from 2003 to 2004.

Lesbian, gay, bisexual, and transgender (LGBT) persons in the U.S. state of Indiana face some legal challenges not experienced by non-LGBT residents. Same-sex marriage has been legal in Indiana since October 6, 2014, when the U.S. Supreme Court refused to consider an appeal in the case of Baskin v. Bogan.

The 2012 United States House of Representatives elections in Indiana were held on Tuesday, November 6, 2012 to elect the nine U.S. Representatives from the state, one from each of the state's nine congressional districts. The elections coincided with the elections of other federal and state offices, including a quadrennial presidential election, an election to the U.S. Senate, and a gubernatorial election.

Allen Lucas Messer is a lobbyist and an American politician who represented Indiana's 6th congressional district in the United States House of Representatives from 2013 to 2019. He is a member of the Republican Party. 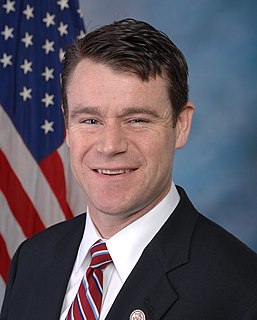 The 2016 Indiana gubernatorial election was held on November 8, 2016, to elect the Governor and Lieutenant Governor of Indiana, concurrently with the 2016 U.S. presidential election as well as elections to the United States Senate and elections to the United States House of Representatives and various state and local elections. The primaries were held on May 3, 2016. Republican Lieutenant Governor Eric Holcomb won the race with 51.4% of the vote.

Eric Joseph Holcomb is an American politician serving as the 51st governor of Indiana since January 2017. From March 2016 to January 2017 he was the 51st lieutenant governor of Indiana under Governor Mike Pence, now the 48th Vice President of the United States. Holcomb was nominated to fill the remainder of Lieutenant Governor Sue Ellspermann's term after Ellspermann resigned on March 2, 2016, to become president of Ivy Tech Community College. A member of the Republican Party, Holcomb won the 2016 election for Governor of Indiana over Democratic nominee John R. Gregg. Indiana Senate Bill 101, titled the Religious Freedom Restoration Act (RFRA), is a law in the U.S. state of Indiana, which allows individuals and companies to assert as a defense in legal proceedings that their exercise of religion has been, or is likely to be, substantially burdened. 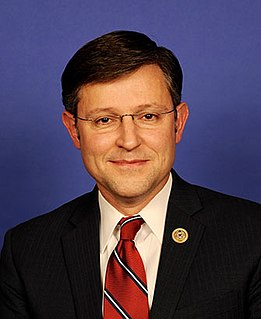 James Michael Johnson is the U.S. Representative for Louisiana's 4th congressional district, first elected in 2016. He is the incoming chairman of the conservative House Republican Study Committee.

Kenneth Lee Henderson, known as Ken Henderson, is a real estate developer from Russellville, Arkansas, who is a Republican member of the Arkansas House of Representatives for District 71 in Pope County in the north central portion of his state.

Ronald Dean McNair, known as Ron McNair, is an automotive repairman in Alpena, Arkansas, who is a Republican member of the Arkansas House of Representatives for District 98 in Boone and Carroll counties in the northern portion of his state.

Lowell Blake Johnson is a farmer from his native Clay County, Arkansas, who is a Republican member of the Arkansas State Senate for District 20, which encompasses Clay, Greene, Lawrence and parts of Randolph and Craighead counties, based in the northeastern portion of his state.