Thomas George Wass (26 December 1873 – 27 October 1953), known as Tom Wass, was a Nottinghamshire bowler who is best remembered, along with Albert Hallam, for bowling that gave Nottinghamshire a brilliant County Championship win in 1907. Wass also holds the record for the most wickets taken for Nottinghamshire - 1633 for 20.34 each.

Tall and solidly built, Wass had a highly rhythmic run-up that allowed him to be, in his prime, fast through the air. However, it was his leg-cutter that made him formidable, and Wass unlike most fast bowlers of the time was very dangerous after rain but less effective on a firm pitch when the ball did not turn. [1] He also had a very difficult slower ball that on his best days caught many batsmen unaware. [2] Wass was a very moderate fieldsman and had no pretensions to be a batsman – though he did score 56 against Derbyshire in 1906, he was dropped four times in doing so. [3]

Wass began his career in local cricket but became a professional for Edinburgh Academicals and Liverpool. [1] Qualified by residence, Wass was offered a place on the Lancashire staff but declined, [1] yet he still took some time to establish himself in a Nottinghamshire side that was in the late 1890s exceedingly weak in bowling [4] and it was never understood why he was given so little to do when he finally broke into the team in the last game against Lancashire. [4] In his first two full seasons, he had very modest records, but in 1900, Wass became Nottinghamshire’s chief bowler along with John Gunn and bowled the team to seven victories as against five in the three season from 1897 to 1899. In 1901, apart from one match on a sticky wicket against a weak Derbyshire eleven, Wass was so disappointing he was dropped from the side. He took 58 wickets at the contemporaneously high cost of 29.72 [5] On the wet wickets of 1902 Wass became one of the most difficult bowlers in the game, capturing 140 wickets at 15.89 run each in all first-class cricket. It remains noteworthy how Wass’ bowling was the decisive factor in each Nottinghamshire victory that summer:

In 1903, despite numerous soft pitches, Wass was less effective taking 76 wickets, though this was frequently attributed to the extreme placidity of the Trent Bridge pitches in fine weather. [6] Still, in 1904, though overworked in unfavourable conditions, Wass appeared for the Players at Kennington Oval, which was to remain one of only two appearances he ever made in a representative match. [1] In 1905, he was at times deadly but handicapped by an injury in a local game, which kept him out of a third of Nottinghamshire’s county matches. [7]

May 1906 saw Wass at his deadliest, including one of the most remarkable games in county cricket at Aigburth, where he took 16 wickets in a day on a sticky wicket, yet Nottinghamshire still lost. [8] However, after he recovered from a strain sustained in the Whitsuntide game against Surrey “the long-continued dry weather found out his limitations”. [9] In 1907, however, Wass opened with something even more sensational: taking 6 wickets for 3 runs against the Marylebone Cricket Club (MCC) after two blank days. This time wet weather continued almost continuously all summer, allowing Wass and Hallam to dominate match after match to such an extent that they took 298 wickets between them in just nineteen games and Nottinghamshire won fifteen of these and were never defeated. Nobody else bar John Gunn did any serious work, and Gunn took only 25 wickets in seventeen matches in which he bowled.

Wass was chosen in the thirteen for the First Test against South Africa at Lord’s in 1907 but left out of the final eleven. In 1908, despite the fact that Hallam declined owing to rheumatism in his right shoulder, Wass remained at his best and took sixteen for 103 in a day against Essex. [10] 1909, a summer as wet as 1907, was very disappointing: although Hallam was back to full fitness, Wass had his worst record since 1905, but in the following two years Wass recovered his form and when helped by the wicket remained as formidable as ever despite having lost much of his former pace. [11] The wet summer of 1912 was disappointing with the wickets more helpful than ever: Wass took fifty fewer wickets than in 1907, then in 1913 he failed to reach 100 wickets in a full season for the first time in ten years. 1914, [5] when Wass was handicapped by injury and missed seven games, saw him fall further to 69 wickets at his highest average since 1903. After the war he appeared only once, in Joe Hardstaff senior’s benefit match. "Topsy" Wass was regarded as a character [1] but was generally popular drawing a remarkably warm tribute from Sir Pelham Warner when he died. [12] 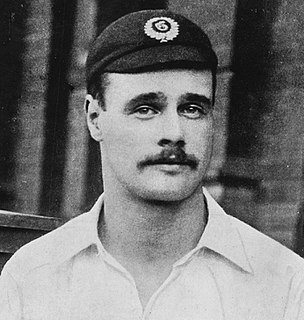 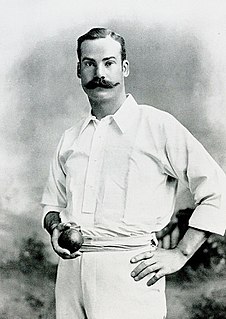 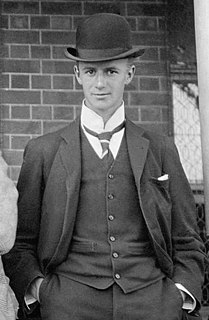 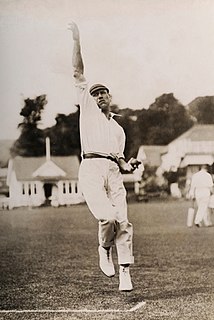 John Richmond Gunn was an English cricketer who played in six Tests from 1901 to 1905.

Walter Scott Lees was a Surrey and England cricketer who played in 5 Tests against South Africa in 1906. On his debut, he took five wickets in the first innings in Johannesburg.

Neville Alexander Knox was an English fast bowler of the late 1900s and effectively the successor to Tom Richardson and William Lockwood in the Surrey team. Because of his profession as a singer, Knox's career was short, but he was undoubtedly the fastest bowler of his time and one of the fastest bowlers ever to play for England – probably capable of speeds over 150 km/h (93 mph).

Dick Tyldesley was a Lancashire cricketer who was one of the most important figures in Lancashire breaking Yorkshire's stronghold on the County Championship between 1926 and 1930.

1906 was the 17th season of County Championship cricket in England. The title was decided in the final round of matches with Kent County Cricket Club finishing just ahead of Yorkshire. George Hirst completed a unique "double Double" of 2,385 runs and 208 wickets. Tom Hayward broke Bobby Abel’s 1901 record for the most runs scored in a first-class season.

1869 was the 83rd season of cricket in England since the foundation of Marylebone Cricket Club (MCC). The Cambridgeshire club went into demise, thougha team called Cambridgeshire later played in two specially arranged matches, in 1869 against Yorkshire and in 1871 against Surrey. After that, Cambridgeshire ceased to be a first-class team. The problem was attributed to the lack of available amateurs to back up the famous trio of Bob Carpenter, the first Tom Hayward and George Tarrant, along with the absence of useful patronage and the difficulty of obtaining membership which led to a debt deemed unpayable.

Albert Brian Jackson is a former English cricketer. who played for Derbyshire from 1963 to 1968 and for MCC in 1967. 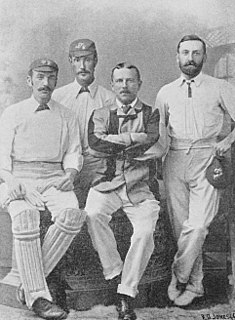 Alexander Watson, also known as Alec Watson, was a Scottish first-class cricketer who played for Lancashire. Watson was one of the first long-serving professionals for Lancashire, and in his prime formed part of an exceedingly formidable bowling attack with Allan Steel, Dick Barlow and John Crossland that lifted Lancashire from an upstart county to the most powerful in domestic cricket, winning twenty-two and only losing one of twenty-nine county games in 1881 and 1882.

Thomas Jayes was an English first-class cricketer who played for Leicestershire between 1903 and 1911. He was born and died at Ratby, Leicestershire. Jayes was a right-arm fast bowler and a hard-hitting lower middle-order right-handed batsman; unusually for fast bowlers of the era when he played, he was also rated as a good fielder.

Reginald Beaumont Heygate was an English cricketer who appeared in 73 first-class matches from 1902 to 1904 and 1909 to 1911 as a right-handed batsman who scored 2,818 runs with a highest score of 136 and took four wickets with a best performance of two for 21.