Born in Torvestad, he worked as a banker and farmer for the most of his career. He was a mayor of Torvestad from 1907. He was elected to the Norwegian Parliament in 1913, representing the constituency of Karmsund. He served only one term. [1]

Nils Johan Semb was the coach of the Norway national football team from 1998 to 2003, presiding over 68 matches.

Alf-Inge Rasdal Håland, is a Norwegian former professional footballer who played as a defender or midfielder.

The Norwegian surnames Haaland and Håland may refer to the following people:

Wegner is a surname, and may refer to:

Peter Valeur was a Norwegian politician for the Coalition Party. Born in Bergen, he embarked on a career in the military, parallel with law studies. He graduated as cand.jur. in 1873. After a series of civil jobs he settled in Kristiansand in 1892 as a postmaster.

Christian Wegner Haaland is a Norwegian ship-owner and politician for the Conservative Party.

Circus Fandango is a 1954 Norwegian drama film directed by Arne Skouen. It was entered into the 1954 Cannes Film Festival.

Thomas Haaland may refer to: 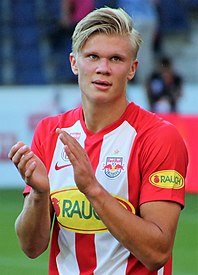 Erling Braut Haaland is a Norwegian professional footballer who plays as a striker for Bundesliga club Borussia Dortmund and the Norway national team. A prolific goalscorer, he is recognised for his pace, athleticism and strength, earning him the nickname, “The Terminator” by many of his admirers. Haaland also plays with high levels of confidence, utilising precise off-the-ball movement and work ethic. He is considered to be one of the best strikers in world football, as well as one of the best young footballers in the world. He holds the record for the fewest games needed to reach 20 UEFA Champions League goals (14) aswell as being the youngest player to reach that goal tally.

Erik Tobias Sandberg is a Norwegian football player who plays as defender for Lillestrøm.

Albert Tjåland is a Norwegian professional football player who plays for Molde FK.