Matthew James Welsh, OAM is an Australian swimmer who is the former world champion in the backstroke and butterfly. He took two golds in 50-metre butterfly and 50-metre backstroke, during one hour, at the World Championships in Shanghai 2006. Welsh retired from professional swimming in March 2008 when he failed to secure a place in the team for the Beijing Olympics. 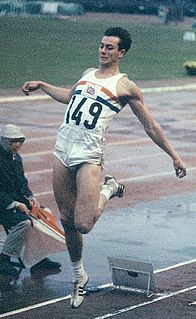 Lynn Davies CBE is a Welsh former track and field athlete who specialised in the long jump. He was the 1964 Olympic champion in the event. He was born in Nantymoel near Bridgend and was a member of the Cardiff Amateur Athletic Club.

Great Britain, represented by the British Olympic Association (BOA), competed at the 1956 Summer Olympics in Melbourne, Australia. British athletes have competed in every Summer Olympic Games. 189 competitors, 163 men and 26 women, took part in 108 events in 17 sports. 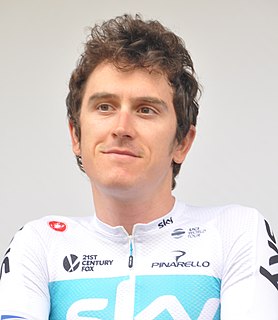 Geraint Howell Thomas, is a British professional racing cyclist, who currently rides for UCI WorldTeam Team Ineos, Wales and Great Britain, competing on both track and road. Like compatriot Bradley Wiggins, he is one of the few riders in the modern era to achieve significant elite success as both a track and road rider, with notable victories in the velodrome, in one-day racing and in stage racing.

Sport in Wales plays a prominent role in Welsh culture. The most popular sports in Wales are rugby union and association football. Like the other countries of the United Kingdom, Wales enjoys independent representation in major world sporting events such as the FIFA World Cup and in the Rugby World Cup, but competes as part of the England cricket team and as Great Britain in some other competitions, including the Olympics.

Venissa Anne Head is a former international track and field athlete from Wales.

Irene Steer was a Welsh freestyle swimmer. She was one of the three Welsh women who have won Olympic gold medals, the others being Nicole Cooke and Jade Jones. In 1912, Steer won a gold medal in the 4 × 100 m relay and failed to reach the final of the individual 100 m race.

Reginald "Reg" Heber Thomas AFC was a Welsh middle-distance runner. He competed at the 1928 and 1932 Summer Olympics and the 1930 British Empire Games. He missed the 1936 Summer Olympics because of injury, and did not compete in the 1934 British Empire Games for Wales, because of English objections. At both Olympics he was eliminated in the first round of the 1500 metres event. At the 1930 Empire Games he won the gold medal in the mile and the silver medal in the 880 yards race. He could not compete for Wales because Wales did not have a national athletics association at the time. Welsh track and field athletes could only compete for England in 1930 although Welsh swimmers did compete for their home nation.

Sarah Thomas is a Welsh field hockey midfield and forward player, who is a member of the Wales and Great Britain women's field hockey team since making her GB debut in 2003. She was part of the team that won bronze at the 2012 Summer Olympics.

Gwyn Thomas Manning was a Welsh amateur footballer who captained Great Britain at the 1948 Summer Olympics.

The following is a list of notable deaths in June 2003.

The following is a list of notable deaths in March 2002.