There have been two creations of Baron De La Warr, and West came from the second. He was the son of Thomas West, 2nd Baron De La Warr, of Wherwell Abbey in Hampshire and Anne Knollys, daughter of Catherine Carey, Lady Knollys; making him a great-grandson of Mary Boleyn. He was born at Wherwell, Hampshire, England, and died at sea while travelling from England to the Colony of Virginia. Counting from the original creation of the title, West would be the 12th Baron. [4]

As the eldest son of the 2nd Baron De La Warr, Thomas West received his education at Queen's College, Oxford. He served in the English army under Robert Devereux, 2nd Earl of Essex, and, in 1601, was charged with supporting Essex's ill-fated insurrection against Queen Elizabeth I, but acquitted of those charges. [5] He succeeded his father as Baron De La Warr in 1602. [6] It was said that he became a member of the Privy Council, but this has been disproved. [7]

Lord De La Warr was the largest investor in the London Company, which received two charters to settle colonists in the New World, and furnished and sent several vessels to accomplish that aim. He was appointed governor-for-life and captain-general of the Colony of Virginia, to replace the governing council of the colony under the presidency of Captain John Smith. [8] Subsequently, in November 1609, the Powhatan tribe of Native Americans killed John Ratcliffe, the Jamestown Colony's Council President, and attacked the colony in what became the First Anglo-Powhatan War. [9] As part of England's response, De La Warr recruited and equipped a contingent of 150 men and outfitted three ships at his own expense, and sailed from England in March 1610. [10]

Lord De La Warr contracted malaria or scurvy in 1611. He left the colony on a ship captained by Sir Samuel Argall headed to the West Indies to recover but was blown off course by a storm and forced to return to England. [11]

Later that year, De La Warr published a book titled The Relation of the Right Honourable the Lord De-La-Warre, Lord Governour and Captaine Generall of the Colonie, planted in Virginea. [12] Although attributed to De La Warr, the book was actually written by company employee Samuel Calvert. [7]

In the Autumn of 1616, Baron De La Warr and his wife Cecilia Shirley West, introduced John Rolfe and his wife, Pocahontas, into English society. The visitors from Virginia were in London to raise funds for the Virginia Company of London and to encourage colonization of Virginia. De La Warr remained the nominal governor, and after receiving complaints from the Virginia settlers about Argall's tyranny in governing them on his behalf, he set sail for Virginia again in 1618 aboard the Neptune to investigate those charges. He died at sea on 7 June [5] [13] and it is believed that he was poisoned. [7]

It was thought for many years that Lord De La Warr had been buried in the Azores or at sea. [5] By 2006, researchers had concluded that his body was brought to Jamestown for burial. In October 2017, archaeologists excavated remains from underneath one of the churches at Historic Jamestowne, but it is not yet known if De La Warr's is one of those. [14]

Earl De La Warr is a title in the Peerage of Great Britain. It was created in 1761 for John West, 7th Baron De La Warr. 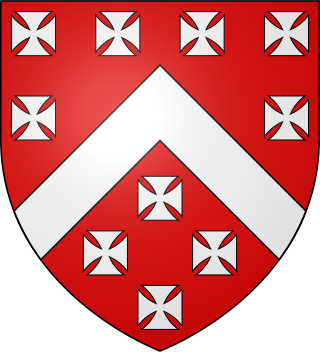 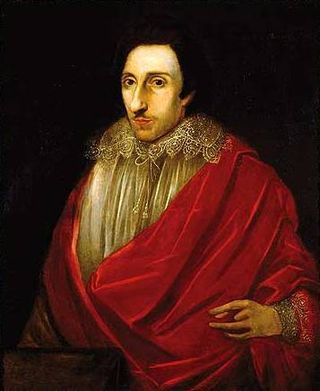 The Honourable George Percy was an English explorer, author, and early Colonial Governor of Virginia.

The Jamestown supply missions were a series of fleets from 1607 to around 1611 that were dispatched from England by the London Company with the specific goal of initially establishing the Company's presence and later specifically maintaining the English settlement of "James Fort" on present-day Jamestown Island. The supply missions also resulted in the colonization of Bermuda as a supply and way-point between the colony and England.

Sir Thomas Dale was an English naval commander and deputy-governor of the Virginia Colony in 1611 and from 1614 to 1616. Governor Dale is best remembered for the energy and the extreme rigour of his administration in Virginia, which established order and in various ways seems to have benefited the colony, although he was criticised for high-handedness. He is also credited with the establishment of Bermuda Hundred, Bermuda Cittie, and the Cittie of Henricus.

Baron West is a title created in the Peerage of England in 1402. The title has been in abeyance since 1554, although it is possible to argue that it has been merged.

Sir Thomas Gates (fl.?–1622), was the governor of Jamestown, in the English colony of Virginia. His predecessor, George Percy, through inept leadership, was responsible for the lives lost during the period called the Starving Time. The English-born Gates arrived to find a few surviving starving colonists commanded by Percy, and assumed command. Gates ruled with deputy governor Sir Thomas Dale. Their controlled, strict methods helped the early colonies survive. Sir Thomas was knighted in 1596 by Robert Devereux, 2nd Earl of Essex for gallantry at the Capture of Cadiz. His knighthood was later royally confirmed by Queen Elizabeth I.

John West was an early member of the Virginia General Assembly and acting colonial Governor of Virginia from 1635 to 1637, the third West brother to serve as Governor and one of the founders of the West Family of Virginia, which would include many politicians.