He was knighted by Henry VII on 18 January 1478, and on 4 March 1486 was granted lands in Sussex after the attainder of the Duke of Norfolk. In 1487 he was granted an annuity of £20 by Peter Courtenay, Bishop of Winchester. In 1489 he was made a Knight of the Bath at the creation of Henry VII's eldest son, Arthur Tudor, as Prince of Wales. [3] [8]

He was one of the 'chief commanders' of an English force sent to Flanders in 1491 to assist the Emperor Maximilian against the French, and in 1496 was the 'chief commander' of forces raised to suppress the Cornish Rebellion, commanding a retinue at the Battle of Deptford Bridge. He was installed as a Knight of the Garter on 11 May 1510. He participated in the sieges of Therouanne and Tournai in 1513, and was made a knight banneret after the French defeat at the Battle of the Spurs on 18 August 1513. He attended Mary Tudor at her marriage to Louis XII of France in 1514, and attended Henry VIII at the Field of the Cloth of Gold in 1520. [3] [8] In 1524 he was appointed High Sheriff of Surrey and Sussex.[ citation needed ]

He married secondly, before 1482, Elizabeth Mortimer (d. 29 June 1502), the daughter of Sir Hugh Mortimer [12] of Martley and Kyre Ward, Worcestershire, by Eleanor Cornwall, daughter of Sir Edmund Cornwall, by whom he had five sons and six daughters: [8] [13] [14]

He married thirdly Eleanor Copley (c.1476-1536), daughter of Roger Copley, esquire, of London and Roughey in Horsham, Sussex, by Anne Hoo, second daughter and co-heiress of Thomas Hoo, Baron Hoo and Hastings, by whom he had three sons and four daughters: [22]

Richard of Conisburgh, 3rd Earl of Cambridge was the second son of Edmund of Langley, 1st Duke of York, and Isabella of Castile. He was beheaded for his part in the Southampton Plot, a conspiracy against King Henry V. He was the father of Richard Plantagenet, 3rd Duke of York, and the grandfather of King Edward IV and King Richard III. 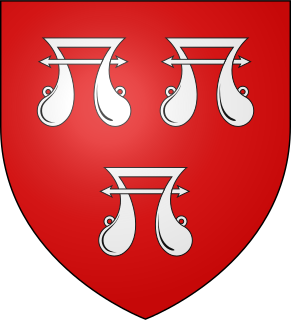 Thomas Ros or Roos, 8th Baron Ros of Helmsley was an English peer. 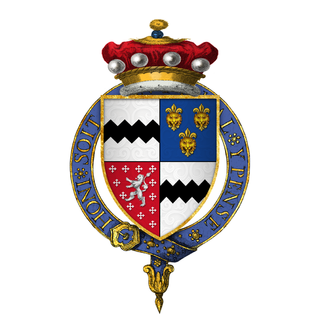 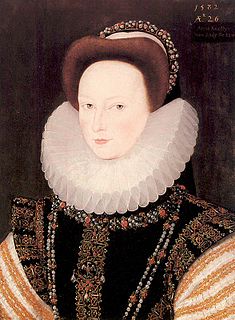 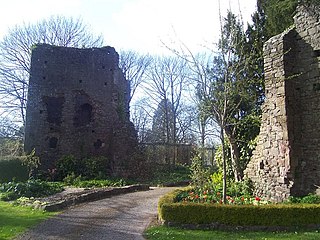 Hugh de Courtenay, 4th/12th Earl of Devon was an English nobleman, son of the 3rd/11th Earl of Devon, and father of the 5th/13th Earl. The ordinal number given to the early Courtenay Earls of Devon depends on whether the earldom is deemed a new creation by the letters patent granted 22 February 1334/5 or whether it is deemed a restitution of the old dignity of the de Redvers family. Authorities differ in their opinions, and thus alternative ordinal numbers exist, given here.

Elizabeth Mortimer, Baroness Camoys was an English noblewoman, the granddaughter of Lionel of Antwerp, 1st Duke of Clarence, and great-granddaughter of King Edward III. Her first husband was Sir Henry Percy, known to history as 'Hotspur'. She married secondly Thomas Camoys, 1st Baron Camoys. She is represented as 'Kate, Lady Percy,' in Shakespeare's Henry IV, Part 1, and briefly again as 'Widow Percy' in Henry IV, Part 2. 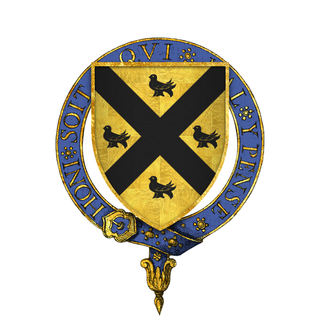