Thomas Wharton is an artist, musician, children's book author, app producer, designer and communications specialist. He is co-founder and co-owner of Adventure House Communications Group and One Hundred Robots.

Born in Wheeling, West Virginia, Thomas Wharton received a master's degree in music at the University of West Virginia before moving to New York City. He then studied art and design at The Art Student's League, the School of Visual Arts, the New York Studio School, and Parsons. His paintings have won The Georgie Read Barton Award from the Hudson Valley Art Association, The Katlin Seascape Award and the Windsor Newton Award from the Salmagundi Club.[ citation needed ]

In 1991, Thomas Wharton wrote and illustrated the children's book Hildegard Sings about an opera singing hippo who aspires to be an opera star. Publishers Weekly describes the book as a "lighthearted and triumphant tale" [1] while Kirkus sees it as "an excellent way to introduce kids to the opera." [2]

Thomas Wharton and Robert Lowe then established One Hundred Robots, an iOS application development and publishing company. Their first iOS application, The Night Before Christmas, was released in December 2010. Their next release, Cinderella - A Princess Story was in April 2011. [3] Hildegard Sings, an adaptation of the original book, which was released as an app for iPhone, iPad, and iPod Touch on June 23, 2011.

The Apple Design Awards (ADA) is a special event hosted by Apple Inc. at its annual Worldwide Developers Conference. The event is meant to recognize the best and most innovative Macintosh and iOS software and hardware produced by independent developers, as well as the best and most creative uses of Apple's products. The ADAs, as they are commonly known, are awarded in a variety of categories which vary from year to year. The Apple Design Awards have been presented each year since 1996, though for the first two years of their existence they were known as the Human Interface Design Excellence (HIDE) Awards. 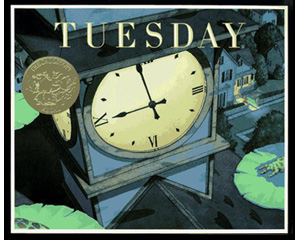 Tuesday, written and illustrated by David Wiesner, is a 1991 wordless picture book published by Clarion Books. Tuesday received the 1992 Caldecott Medal for illustrations and was Wiesner's first of three Caldecott Medals that he has won during his career. Wiesner subsequently won the Caldecott Medal in 2002 for The Three Pigs, and the 2007 medal for Flotsam.

Mark Schlichting is a publisher, author, and digital pioneer of children's multimedia and interactive design software. He is best known as the creator and subsequent Design and Art Director of Brøderbund's Living Books series, one of the first lines of children's interactive book software on CD-ROM. Schlichting was Design and Art Director for Living Book's first interactive CD-ROM book adaptation, Mercer Mayer’s Just Grandma and Me, which was one of the first software titles accredited as a school textbook and used as a product demonstration by Apple CEO John Sculley. 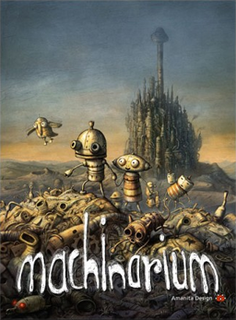 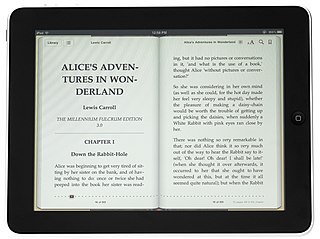 Apple Books, formerly iBooks, is an e-book reading and store application by Apple Inc. for its iOS and macOS operating systems and devices. It was announced, under the name iBooks, in conjunction with the iPad on January 27, 2010, and was released for the iPhone and iPod Touch in mid-2010, as part of the iOS 4 update. Initially, iBooks was not pre-loaded onto iOS devices, but users could install it free of charge from the iTunes App Store. With the release of iOS 8, it became an integrated app. On June 10, 2013, at the Apple Worldwide Developers Conference, Craig Federighi announced that iBooks would also be provided with OS X Mavericks in fall 2013.

Poul Lange, also known as Poul Hans Lange, is a Danish illustrator, graphic designer, photographer, fine artist and children's book creator, who has won numerous awards for his design work. Since the early 1990s, he has lived and worked in the United States, first in New York City, and then after 2012 in Los Angeles. In 2011 Lange founded "Chocolate Factory Publishing" with his wife Kayoko Suzuki-Lange. In 2013, Chocolate Factory Publishing released the award-winning children's book app, The Book of Holes.

Digital Book World Publishing Innovation Award is a literary award sponsored by the magazine Digital Book World for innovation in electronic books. "The Publishing Innovation Awards will honor those making strides in this nascent medium." It was announced in 2010 with the inaugural award given January 24, 2011. Award categories include Fiction, Nonfiction, Children's, Reference and Comics. Each category has one unique judge who chooses the winner from a finalist list of three contenders.

Contre Jour is a physics-based puzzle video game for web browsers, Windows Phone, Android, iOS and Symbian. It was developed in 2011 by Ukrainian developer Mokus and published by Electronic Arts through its label Chillingo. The art for the game Contre Jour was created by artist Mihai Tymoshenko. The soundtrack for Contre Jour was composed by David Ari Leon. The game focuses upon a little blob named Petit, a reference to Le Petit Prince, whose means of locomotion is to be manoeuvered around by manipulating his environment through the various areas of the game using the touch screen.

American Girl is a series of video games developed by various studios and distributed by American Girl.

The iPad Mini is a line of mini tablet computers designed, developed, and marketed by Apple Inc. It is a sub-series of the iPad line of tablets, with a reduced screen size of 7.9 inches, in contrast to the standard 9.7 inches. The first generation iPad Mini was announced on October 23, 2012, and was released on November 2, 2012, in nearly all of Apple's markets. It features similar internal specifications to the iPad 2, including its display resolution.

The first-generation iPad Mini is a mini tablet computer designed, developed, and marketed by Apple Inc. It was announced on October 23, 2012, as the fourth major product in the iPad line and the first of the iPad Mini line, which features a reduced screen size of 7.9 inches (20 cm), in contrast to the standard 9.7 inches (25 cm). It features similar internal specifications to the iPad 2, including its display resolution.

Oceanhouse Media, Inc. is a publisher of iOS, Android and Windows 8 apps. Their offerings include digital book apps from brands such as Dr. Seuss, The Berenstain Bears and Little Critter, as well as self-improvement apps from Hay House authors, and Chicken Soup for the Soul. Oceanhouse Media was founded in January 2009 by Michel and Karen Kripalani in Encinitas, California. The company released its first iOS app, Bowls - Authentic Tibetan Singing Bowls, on the Apple App Store in March 2009. Oceanhouse Media currently has licensing agreements in place with Dr. Seuss Enterprises, Hay House, Mercer Mayer, HarperCollins, Random House, Houghton Mifflin Harcourt Publishing Company, Chronicle Books, Chicken Soup for the Soul and many others.

Cupcake Digital Inc. is an independent developer of mobile applications for tablets and smartphones focusing on the children's market. Cupcake Digital is headquartered in New York City, with offices in Moncton, New Brunswick (Canada), Santa Barbara, California, and Richmond, Virginia.

Bobo Explores Light is an education book app for iPad that introduces children to light and light related topics. It was released in September 2011. Bobo was developed by Game Collage in collaboration with journalist Bob Tedeschi, creator and author of The New York Times’ weekly App Smart column. In 2012, Bobo Explores Light won an Apple Design Award.

Procreate is a raster graphics editor app for digital painting developed and published by Savage Interactive for iOS and iPadOS. Designed in response to the artistic possibilities of the iPad, and catering to artists from beginners to professionals, it was launched on the App Store (iOS) in 2011.