Thomas Whittle (1803–1887) was an English landscape and still life artist.

Thomas Whittle was born in Beddington, Surrey to Thomas and Mary Whittle. He was christened on 6 November 1803. Whittle's father and son were also both named Thomas; this one was generally known as "Thomas Whittle the Elder" because his son was also an artist but his father was not.

A largely self-taught artist, Whittle also worked as a journeyman, furniture dealer, clerk and draper. He was not a wealthy man and during his lifetime did not make much money from his art. Often it can be hard to distinguish between Whittle and his son as they both had similar styles. Thomas Whittle the Elder often painted still lives of fruit and sometimes landscapes such as mountains or lakes. 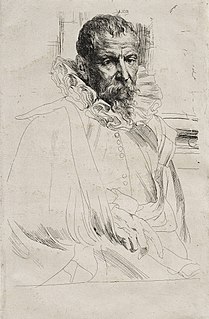 Pieter Brueghelthe Younger was a Flemish painter, known for numerous copies after his father Pieter Bruegel the Elder's work as well as his original compositions. The large output of his studio, which produced for the local and export market, contributed to the international spread of his father's imagery. 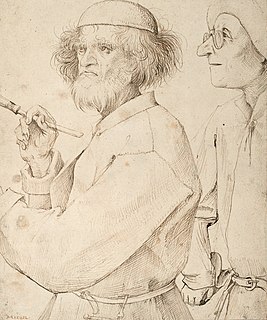 Jan Brueghelthe Elder was a Flemish painter and draughtsman. He was the son of the eminent Flemish Renaissance painter Pieter Bruegel the Elder. A close friend and frequent collaborator with Peter Paul Rubens, the two artists were the leading Flemish painters in the first three decades of the 17th century. 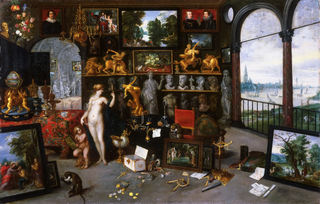 Jan Brueghelthe Younger was a Flemish Baroque painter. He was the son of Jan Brueghel the Elder, and grandson of Pieter Bruegel the Elder, both prominent painters who contributed respectively to the development of Renaissance and Baroque painting in the Southern Netherlands. Taking over his father's workshop at an early age, he painted the same subjects as his father in a style which was similar to that of his father. He regularly collaborated with leading Flemish painters of his time. 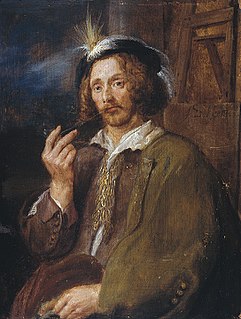 Jan Davidsz. de Heem or in-full Jan Davidszoon de Heem, also called Johannes de Heem or Johannes van Antwerpen or Jan Davidsz de Hem, was a still life painter who was active in Utrecht and Antwerp. He is a major representative of that genre in both Dutch and Flemish Baroque painting. 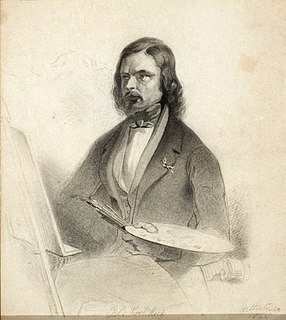 Barend Cornelis Koekkoek was a Dutch landscape artist and lithographer. 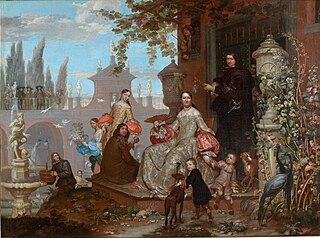 Jan van Kessel the Younger or Jan van Kessel II, known in Spain as Juan Vanchesel el Mozo or el Joven, was a Flemish painter who after training in Antwerp worked in Spain. Known mainly for his portraits he became a court painter to the King and Queen of Spain. A few landscapes and mythological and allegorical scenes have also been attributed to him. He was formerly believed to have been active as a landscape painter, but this is now no longer generally accepted. 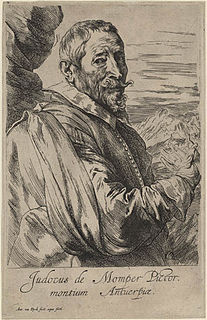 Joos de Momper the Younger or Joost de Momper the Younger was a Flemish landscape painter active in Antwerp between the late 16th century and the early 17th century. Brueghel's influence is clearly evident in many of de Momper's paintings. His work is situated at the transition from late 16th-century Mannerism to the greater realism in landscape painting that developed in the early 17th century. He achieved considerable success during his lifetime.

Philip Reinagle was an English painter of animals, landscapes, and botanical scenes. The son of a Hungarian musician living in Edinburgh, Reinagle came to London in 1763 and after serving an apprenticeship, later became a member of the Royal Academy. 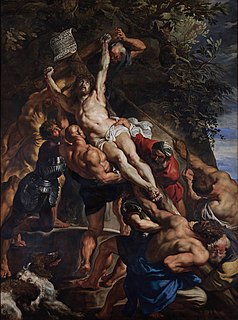 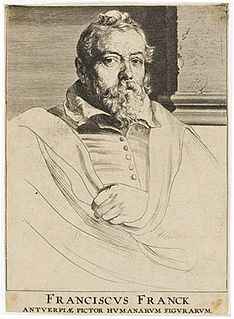 Frans Francken the Younger was a Flemish painter and the best-known member of the large Francken family of artists. Francken created altarpieces and painted furniture panels, but his reputation chiefly rests on his small and delicate cabinet pictures with historical, mythological, or allegorical themes. He played an important role in the development of Flemish art in the first half of the 17th century through his innovations in many genres including genre painting and his introduction of new subject matter. He was a frequent collaborator of leading Antwerp painters of his time. 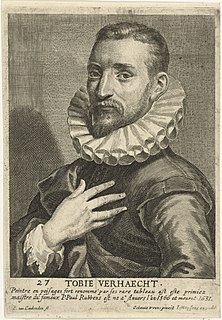 Tobias Verhaecht (1561–1631) was a painter from Antwerp in the Duchy of Brabant who primarily painted landscapes. His style was indebted to the mannerist world landscape developed by artists like Joachim Patinir and Pieter Bruegel the Elder. He was the first teacher of Pieter Paul Rubens.

Marine art or maritime art is a form of figurative art that portrays or draws its main inspiration from the sea. Maritime painting is a genre that depicts ships and the sea—a genre particularly strong from the 17th to 19th centuries. In practice the term often covers art showing shipping on rivers and estuaries, beach scenes and all art showing boats, without any rigid distinction - for practical reasons subjects that can be drawn or painted from dry land in fact feature strongly in the genre. Strictly speaking "maritime art" should always include some element of human seafaring, whereas "marine art" would also include pure seascapes with no human element, though this distinction may not be observed in practice.

Thomas Barker or Barker of Bath, was a British painter of landscape and rural life.

Jan Pauwel Gillemans the Younger was a Flemish still life painter. He worked in a range of still life genres including flower and fruit still lifes, banquet still lifes, pronkstillevens and hunting pieces. He collaborated with figure painters to create landscapes which combined a mythological or allegorical scene with a still life. He worked and lived in Antwerp, Middelburg, London and Amsterdam.

Thomas Whittle may refer to:

Peeter Gijsels or Pieter Gijsels, was a Flemish Baroque painter. He is known for his landscapes, architectural compositions and still lifes. His landscapes in the style of Jan Brueghel the Elder were very sought after in his time. He is also regarded as a genre painter as he painted village scenes of village markets and kermises.