Born in London, Truro was the second son of Thomas Wilde, an attorney and founder of Wilde Sapte, by his wife Mary Anne (née Knight). He was educated at St Paul's School and was admitted an attorney in 1805. He was the younger brother of Sir John Wylde. James Wilde, 1st Baron Penzance, was his nephew.

Wilde subsequently entered the Inner Temple and was called to the bar in 1817, having practised for two years before as a special pleader. Retained for the defence of Queen Caroline in 1820 he distinguished himself by his cross-examination and laid the foundation of an extensive common law practice. In 1824 he was made Serjeant-at-Law, and in 1827 King's Serjeant.

He first entered parliament in the Whig interest as member for Newark (1831–1832 and 1835–1841), afterwards representing Worcester (1841–1846). He was appointed Solicitor General in 1839, being knighted in 1840, [1] and became Attorney General in succession to Sir John Campbell in 1841. In 1846 he was appointed Chief Justice of the Court of Common Pleas, an office he held until 1850, when he became Lord Chancellor, and was created Baron Truro, of Bowes in the County of Middlesex. [2] He held this latter office until the fall of the Russell ministry in 1852. [3]

Lord Truro married firstly Mary, widow of William Devaynes (1730–1809) and daughter of William Wileman, in 1813. They had three surviving children. After Mary's death in 1840 he married secondly Mademoiselle d'Este, Augusta Emma d'Este, daughter of Prince Augustus Frederick, Duke of Sussex and a first cousin of Queen Victoria, on 13 August 1845. There were no children from this marriage. Lord Truro died in London in November 1855, aged 76, and was succeeded in the barony by his second but eldest surviving son, Charles. Lady Truro died in May 1866, aged 64. 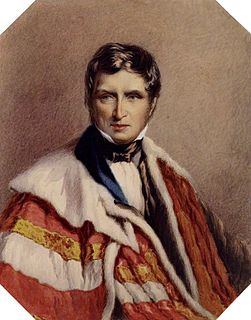 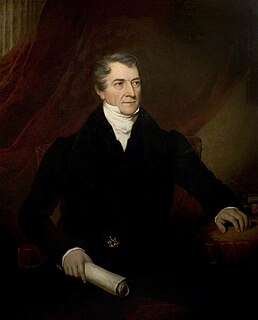 Edward Strutt, 1st Baron Belper PC FRS, was a British Liberal Party politician. He served as Chancellor of the Duchy of Lancaster from 1852 to 1854 under Lord Aberdeen. 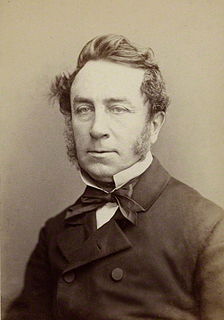 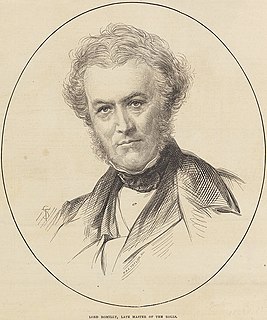 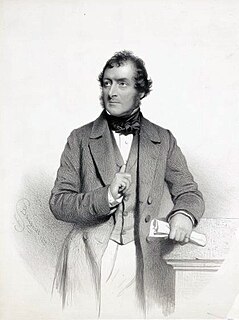 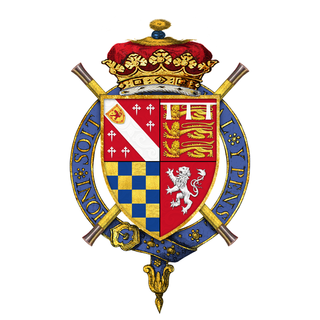 James Plaisted Wilde, 1st Baron Penzance, was a noted British judge and rose breeder who was also a proponent of the Baconian theory that the works usually attributed to William Shakespeare were in fact written by Francis Bacon.

Ernest Augustus Charles Brudenell-Bruce, 3rd Marquess of Ailesbury PC, styled Lord Ernest Bruce from 1821 until 1878, was a British courtier and politician. He served as Vice-Chamberlain of the Household between 1841 and 1846 and again between 1852 and 1858. An MP for 46 years, he succeeded his elder brother in the marquessate in 1878.

Baron Truro, of Bowes in the County of Middlesex, was a title in the Peerage of the United Kingdom. It was created on 15 July 1850 for Sir Thomas Wilde, the former Solicitor General, Attorney General and Lord Chief Justice of the Common Pleas. He became Lord Chancellor the same year. The title became extinct on the death of his grandson, the third Baron, on 8 March 1899. He was the son of Honourable Thomas Montague Carrington Wilde, youngest son of the first Baron, and had succeeded his uncle in the title in 1891.

Admiral Maurice Frederick FitzHardinge Berkeley, 1st Baron FitzHardinge, was a Royal Navy officer. As a junior officer he commanded gunboats on the Tagus, reinforcing the Lines of Torres Vedras, in Autumn 1810 during the Peninsular War and, as a captain, he served on the coast of Syria taking part in the capture of Acre in November 1840 during the Oriental Crisis. He also served as Whig Member of Parliament for Gloucester and became First Naval Lord in the Aberdeen ministry in June 1854 and in that role focussed on manning the fleet and in carrying out reforms and improvements in the food, clothing, and pay of seamen.

Sir John Wylde was Chief Justice of the Cape Colony, Cape of Good Hope and a judge of the Supreme Court of the colony of New South Wales born at Warwick Square, Newgate Street, London.

George Pitt-Rivers, 4th Baron Rivers, known as George Beckford until 1828, was a British peer and politician. He held a place as a Lord-in-waiting in several governments, migrating from the Tory to the Liberal Party over the course of his career. He commanded the Dorsetshire Yeomanry Cavalry for a decade. His four sons all suffered from a lung disease, and only the youngest briefly survived him to inherit the barony.