Born in 1893, Williams was educated at Normanton Grammar School in Yorkshire between 1905 and 1911, [2] before attending the University of Leeds. [1] He later moved to South Africa, becoming head of Johannesburg Teachers College. [1] In 1935 he was appointed Honorary Professor of Education by the University of the Witwatersrand, a position he held until 1949. [1]

After moving to Northern Rhodesia, Williams became Director of European Education in 1950. [1] He held the post until 1955, when he was appointed Clerk of the Legislative Council. The following year he was made the Speaker after the retirement of Thomas Spurgeon Page. Having already received an OBE, Williams was knighted in the 1964 Birthday Honours. Following independence on 24 October 1964, he resigned as Speaker on 14 December, [1] and was succeeded by Wesley Nyirenga.

The Colony of Southern Rhodesia was a self-governing British Crown colony in southern Africa. It was the predecessor state of what is now Zimbabwe.

The British South Africa Company was established following the amalgamation of Cecil Rhodes' Central Search Association and the London-based Exploring Company Ltd which had originally competed to exploit the expected mineral wealth of Mashonaland but united because of common economic interests and to secure British government backing. The company received a Royal Charter in 1889 modelled on that of the British East India Company. Its first directors included the Duke of Abercorn, Rhodes himself and the South African financier Alfred Beit. Rhodes hoped BSAC would promote colonisation and economic exploitation across much of south-central Africa, as part of the "Scramble for Africa". However, his main focus was south of the Zambezi, in Mashonaland and the coastal areas to its east, from which he believed the Portuguese could be removed by payment or force, and in the Transvaal, which he hoped would return to British control. 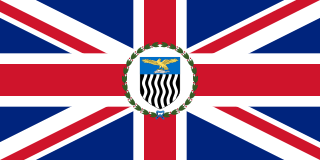 Sir Evelyn Dennison Hone was the last Governor of Northern Rhodesia, from 1959 until it gained its independence as Zambia in 1964.

Sir Glyn Smallwood Jones, was a British colonial administrator in Southern Africa. He was the last governor of Nyasaland from 1961 until it achieved independence in 1964. He served as the only governor-general of Malawi from 1964 until it became a republic in 1966. In 1964, he was appointed a GCMG.

The constitutional history of Zimbabwe starts with the arrival of white people to what was dubbed Southern Rhodesia in the 1890s. The country was initially run by an administrator appointed by the British South Africa Company. The prime ministerial role was first created in October 1923, when the country achieved responsible government, with Sir Charles Coghlan as its first Premier. The third Premier, George Mitchell, renamed the post Prime Minister in 1933.