Thomas James Willmore (16 April 1919 – 20 February 2005) was an English geometer. He is best known for his work on Riemannian 3-space and harmonic spaces.

Willmore studied at King's College London. After his graduation in 1939, he was appointed as a lecturer, but the onset of World War II led him to working as a scientific officer at RAF Cardington, working mainly on barrage balloon defences. During the war, he found the time to write his Ph.D. on relativistic cosmology, and gained his Ph.D. on Clock regraduations and general relativity as an external student of the University of London in 1943 .

In 1946, he was given a lectureship at the University of Durham. He wrote an influential book with Arthur Geoffrey Walker and HS Ruse entitled Harmonic Spaces in 1953. He left Durham in 1954 for the University of Liverpool to join Walker, after a supposed dispute between Willmore and a Durham colleague who refused to order German textbooks after being wounded in World War I.

In 1965, Willmore returned to Durham, where he was appointed Professor of Pure Mathematics. He was elected Vice President of the London Mathematical Society in 1977, a post he held for two years. During that time, he was elected a member of The Royal Academies for Science and the Arts of Belgium.

Willmore retired from the University of Durham in 1984 after holding the position of Head of the Department of Mathematical Sciences on three separate occasions, covering most of his Professorship there. He was given an honorary degree from the Open University in 1994.

A sculpture by Peter Sales was unveiled at the university 13 March 2012. It is entitled "Willmore Surface" and depicts a 4-lobed Willmore torus. [1]

Kunihiko Kodaira was a Japanese mathematician known for distinguished work in algebraic geometry and the theory of complex manifolds, and as the founder of the Japanese school of algebraic geometers. He was awarded a Fields Medal in 1954, being the first Japanese national to receive this honour.

Richard Melvin Schoen is an American mathematician known for his work in differential geometry.

In mathematics, a weakly symmetric space is a notion introduced by the Norwegian mathematician Atle Selberg in the 1950s as a generalisation of symmetric space, due to Élie Cartan. Geometrically the spaces are defined as complete Riemannian manifolds such that any two points can be exchanged by an isometry, the symmetric case being when the isometry is required to have period two. The classification of weakly symmetric spaces relies on that of periodic automorphisms of complex semisimple Lie algebras. They provide examples of Gelfand pairs, although the corresponding theory of spherical functions in harmonic analysis, known for symmetric spaces, has not yet been developed.

Neo-Riemannian theory is a loose collection of ideas present in the writings of music theorists such as David Lewin, Brian Hyer, Richard Cohn, and Henry Klumpenhouwer. What binds these ideas is a central commitment to relating harmonies directly to each other, without necessary reference to a tonic. Initially, those harmonies were major and minor triads; subsequently, neo-Riemannian theory was extended to standard dissonant sonorities as well. Harmonic proximity is characteristically gauged by efficiency of voice leading. Thus, C major and E minor triads are close by virtue of requiring only a single semitonal shift to move from one to the other. Motion between proximate harmonies is described by simple transformations. For example, motion between a C major and E minor triad, in either direction, is executed by an "L" transformation. Extended progressions of harmonies are characteristically displayed on a geometric plane, or map, which portrays the entire system of harmonic relations. Where consensus is lacking is on the question of what is most central to the theory: smooth voice leading, transformations, or the system of relations that is mapped by the geometries. The theory is often invoked when analyzing harmonic practices within the Late Romantic period characterized by a high degree of chromaticism, including work of Schubert, Liszt, Wagner and Bruckner.

Mikhail "Mischa" Gershevich Katz is an Israeli mathematician, a professor of mathematics at Bar-Ilan University. His main interests are differential geometry, geometric topology and mathematics education; he is the author of the book Systolic Geometry and Topology, which is mainly about systolic geometry. The Katz–Sabourau inequality is named after him and Stéphane Sabourau.

Stephen William Semmes is the Noah Harding Professor of Mathematics at Rice University. He is known for contributions to analysis on metric spaces, as well as harmonic analysis, complex variables, partial differential equations, and differential geometry. He received his B.S. at the age of 18, a Ph.D. at 21 from Washington University in St. Louis and became a full professor at Rice at 25. 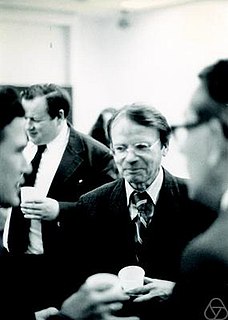 Wilhelm Paul Albert Klingenberg was a German mathematician who worked on differential geometry and in particular on closed geodesics.

Kenji Fukaya is a Japanese mathematician known for his work in symplectic geometry and Riemannian geometry. His many fundamental contributions to mathematics include the discovery of the Fukaya category. He is a permanent faculty member at the Simons Center for Geometry and Physics and a professor of mathematics at Stony Brook University. 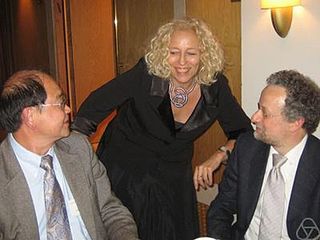 Jürgen Jost is a German mathematician specializing in geometry. He has been a director of the Max Planck Institute for Mathematics in the Sciences in Leipzig since 1996.

Joseph Albert Wolf is an American mathematician. He is now professor emeritus at the University of California, Berkeley.

Richard Lawrence Bishop is an American mathematician, a professor emeritus of mathematics at the University of Illinois at Urbana–Champaign. The Bishop–Gromov inequality in Riemannian geometry is named after him.

Sigmundur Gudmundsson is an Icelandic-Swedish mathematician working at Lund University in the fields of differential geometry and global analysis. He is mainly interested in the geometric aspects of harmonic maps and harmonic morphisms. His work is partially devoted to the existence theory of complex-valued harmonic morphisms from Riemannian homogeneous spaces of various types, such as symmetric spaces and semisimple, solvable and nilpotent Lie groups.

Professor John C. Wood is a British mathematician working at the University of Leeds. He is one of the leading experts on harmonic maps and harmonic morphisms in the field of differential geometry.

Harold Stanley Ruse was an English mathematician, noteworthy for the development of the concept of locally harmonic spaces.