Thomas Wilson Spence (September 2, 1846 – February 23, 1912) of Milwaukee, Wisconsin, was a Wisconsin lawyer and a Republican member of the Wisconsin Legislature. A member of the "Ohio Five" matriculating at Cornell University during that institution's early years, counselor Spence died suddenly, aged 65, on February 23, 1912, while making oral argument in the Wisconsin Supreme Court Chambers at Madison, Wisconsin. [1] [2] "He died with his tie on."

Mr. Spence's Cornell Alumni News obituary listed him as born at Fond du Lac, Wisconsin. In fact, he was not 'native' but rather born in Dungannon, County Tyrone, Ireland or in County Cork [1] on September 2, 1846. The family immigrated to Chillicothe, Ohio, in the wake of Án Gorta Mór or the Great Famine of 1845–1848. The Spence family relocated to Fond du Lac, Wisconsin, in 1865. Spence returned to Ohio for studies at Ohio Wesleyan University and joined the Phi Kappa Psi fraternity. He transferred to Cornell in 1869 with several fraternity brothers, taking his Bachelor of Arts, classical course in 1870, after serving as 'the fourth founder' of the New York Alpha Chapter, Phi Kappa Psi at Cornell University. He was a member of the Irving Literary Society.

Spence married into a family with ties to upstate New York. His spouse, Mary Cornelia Talmidge of Granville, Wisconsin, was born March 21, 1855, to Nancy Ann Eastman (b. 1820) of Oswego, New York, and Montgomery Wilson Talmidge (1816–1887), hardware merchant, whose parents were from New York. [3] Mr. Spence and his wife had one child, Thomas Henry Spence, a Yale man, class of 1899.

Spence began the practice of law at Fond du Lac, hanging his own shingle as the law firm of Coleman & Spence, which then changed its name to Spence & Hiner. [4] He served as postmaster of the town from 1879 to 1883. [1] In 1877 and 1879 he was a member of the Wisconsin Legislature. It was as a member of the Wisconsin State Assembly that Thomas Spence was listed in the Blue Book of 1879, representing the Third District, Fond du Lac with a Population of 15,838. His second election in 1879, garnered 1,055 votes, against 605 for John Bunnell, (Democrat), and 507 for James Fitzgerald (Greenbacker). [5]

About 1890, the Spence family moved to Milwaukee, taking up residence at 19 Prospect Avenue. [6] Thomas became a member of the law firm of Quarles, Spence & Quarles, [1] his partners being Charles Quarles and Joseph Very Quarles, who was a United States Senator from Wisconsin in 1899-1905. [7] In 1902, counselor Spence was listed with fellow fraternity brothers Joseph B. Foraker and Morris Lyon Buchwalter in the publication, Notable Men of the West. The firm established by Spence and the Quarles survives, in some respects, in the 21st century. Borgelt, Powell, Peterson & Frauen S.C. traces its origins to 1881 when Joseph V. Quarles and John B. Winslow formed the firm of Winslow and Quarles with offices in Kenosha and Racine, Wisconsin. Winslow later became Chief Justice of the Wisconsin Supreme Court. Joseph V. Quarles remained with the firm and was soon joined by his brother, Charles Quarles and later by Thomas W. Spence. The firm of Quarles and Spence flourished throughout the late 19th century. In 1893 the firm became known as Quarles, Spence and Quarles, the name which the firm held until 1957. Another name change occurred and in 1970 the firm took its current name of Borgelt, Powell, Peterson & Frauen S.C., which has more than 25 attorneys. While maintaining the firm's core practice representing the insurance industry, the firm also counsels clients on many litigation, employment and business related matters. While much has changed since the firm's founding in 1881, Borgelt, Powell, Peterson & Frauen S.C. remains committed to the highest principles of legal scholarship, courtroom performance and client counseling today, just as from 1881 through the present.

"Mr. Spence's sudden death occurred in the Wisconsin Supreme Court chambers at Madison. He was one of the attorneys in a case which was being argued and he was sitting at the attorneys' table. He suddenly fell across the table and when attendants reached his side he was dead. Although he had been one of the most active and best known lawyers in Wisconsin, he had not mixed in politics since the days when he practiced in Fond du Lac. Although pressed many times to be a candidate for office he had always refused." [2]

Two years after counselor Spence's death, it was written in the History of Wisconsin: " . . . the important law firm of Quarles, Spence & Quarles, with offices in the Sentinel Building at Milwaukee. The interested principals in this firm are all able representatives of the second generation of their respective families in the legal profession in Wisconsin, since each of the members is a son of a distinguished Wisconsin lawyer, the fathers of the present members having likewise been associated in their practice. William C. and Joseph V. Quarles, Jr., are sons of the late Judge Joseph V. Quarles, who was one of the leading members of the Wisconsin bar and who served with distinction as United States Senator and United States District Judge. Thomas H. Spence, the other member of the firm, is a son of the late Thomas W. Spence, whose name is one of marked prominence in connection with the history of Wisconsin jurisprudence." [8]

The Diocese of Fond du Lac is a diocese of the Episcopal Church in the United States of America, encompassing the northeastern third of Wisconsin. The diocese contains about 4,700 baptized members worshiping in 36 locations. It is part of Province 5. Diocesan offices are in Appleton, Wisconsin as are the diocesan Archives. Matthew Gunter is its bishop.

The Reporter is a daily newspaper based in Fond du Lac, Wisconsin owned by Gannett. It serves primarily Fond du Lac and northern Dodge County in East Central Wisconsin.

George Koonce is an American athlete and athletic director. A former linebacker in the National Football League (NFL), he served as the athletic director at the University of Wisconsin–Milwaukee between 2009 and 2010. 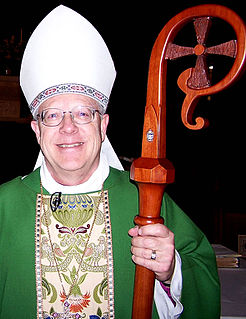 Russell Edward Jacobus was the seventh Bishop of the Diocese of Fond du Lac in The Episcopal Church. Jacobus was consecrated as bishop on 24 May 1994. Prior to becoming bishop, he served as Rector of St. Matthias Episcopal Church in Waukesha, Wisconsin. At the close of Diocesan convention on October 20, 2012, he announced his intention to retire one year hence, on October 31, 2013. 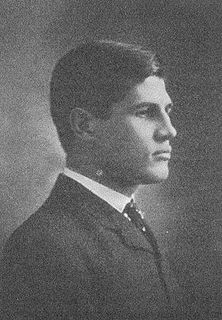 Henry Schoellkopf was an American football player and coach. He was selected as an All-American fullback while attending Harvard Law School in 1903. He was the head coach of the Cornell Big Red football team from 1907 to 1908, compiling a record of 15–3–1.

Harwood Sturtevant was the Episcopal bishop of the Diocese of Fond du Lac, Wisconsin, USA.

Alexander Wolcott Stow was an American lawyer and judge. He was the first Chief Justice of the Wisconsin Supreme Court.

William J. Gilboy was a teacher from Milwaukee, Wisconsin who served one term as a Socialist member of the Wisconsin State Assembly from 1911-1912.

Joseph Herbert Lowell Green was a member of the Wisconsin State Senate.

New Cassel or New Cassell, formerly Crouchville, was a village on the Milwaukee River in the northwestern corner of the Town of Auburn in Fond du Lac County, Wisconsin. It was eventually absorbed into Campbellsport, Wisconsin after the latter was incorporated in 1902, and now constitutes the east end of that village.

Morgan L. Noble (1817–1857) was an American Methodist minister, and later lumberman from Fond du Lac, Wisconsin, who spent two one-year terms in 1849-1850 as a member of the Wisconsin State Assembly from Fond du Lac County, first as a Free Soiler, then as a Democrat.

Louis Eidemiller was an American physician and politician.

Herman Schroeder was a member of the Wisconsin State Assembly.

Henry C. Bottum was a farmer, American politician and member of the Wisconsin State Assembly.

Kate Pier was an American court commissioner and the first woman in the United States to be conferred with judicial powers.