Thomas Winthrop Coit (June 28, 1803 – June 21, 1885) was an American Episcopal minister, author, and educator. He was the fifth President of Transylvania University.

He graduated from Yale College in 1821. While in College he intended to follow his father's profession, but in 1823 he began the study of theology in Andover Seminary. In 1824 he removed to Princeton Seminary, but remained only a few months. He was ordained deacon in the Protestant Episcopal Church by Bishop Thomas Church Brownell, June 7, 1826, at Newtown, Conn. His first parochial charge was as Rector (1827–29) of St. Peter's Church, Salem, Mass., where he was advanced to the priesthood by Bishop Alexander Viets Griswold, November 15, 1827. He was next Rector of Christ's Church, Cambridge, Mass., from Easter, 1829, to Easter, 1835. In 1831 an Episcopal Theological School was begun in Cambridge, and Coit was made Professor of Biblical Learning; this position he held (in connection with his rectorship) until he became in 1835 the President of Transylvania University, Lexington, Ky., and Morrison Professor of Metaphysics and Moral Philosophy. He published in 3 834 a duodecimo edition of the Bible, arranged in paragraphs and parallelisms, with annotations, which was republished in England; in the same year he received the degree of Doctor of Divinity from Columbia College, that of Doctor of Laws was conferred by Trinity College in 1853.

He resigned the office of President in 1837, and was for two years Rector of Trinity Church, Brooklyn, N. Y. In May, 1839, he became the Rector of Trinity Church, New Rochelle, N. Y., where he continued for ten years. While thus occupied he published a vigorous polemic, entitled Puritanism (New York, 1845, pp. 528, 12mo). He also prepared in 1844 a valuable report on the Standard Edition of the Prayer-Book, under appointment of the General Convention. In 1849 he accepted the appointment of Professor of Ecclesiastical History in Trinity College and for the next five years resided in Hartford. In May, 1854, he went to Troy, N Y, as Rector of St Paul's Church ; and about the same time the Berkeley Divinity School (an outgrowth from Trinity College) was established at Middletown, Conn., in which Dr. Coit continued to give instruction in the department which he had previously held in the college. He resigned the charge of a parish in 1872, and in February, 1873, became a resident professor in the Berkeley Divinity School, where he continued until his death there, from Blight's disease, June 21, 1885, at the age of 82.

Besides the woiks mentioned, his publications include a volume of Lectures on the Early History of Christianity in England, with sermons (New York, 1860, pp 334, 12mo).

He married, January 30, 1828, Eleanor Forrester Carlisle, of Salem, by whom he had three sons, of whom the two younger survived him.

Phillips Brooks was an American Episcopal clergyman and author, long the Rector of Boston's Trinity Church and briefly Bishop of Massachusetts, and particularly remembered as lyricist of the Christmas hymn, "O Little Town of Bethlehem".

Moses Coit Tyler was an American author and professor of American history.

John Neil Alexander is an Anglican liturgist and bishop in the Episcopal Church, currently serving as dean of the School of Theology at the University of the South. From 2001 to 2012, he was the 9th bishop of the Episcopal Diocese of Atlanta. 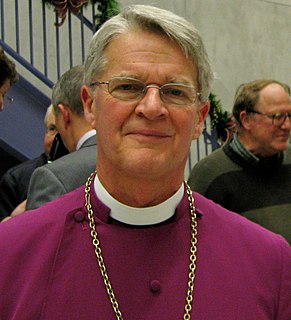 Frank Tracy Griswold III is a retired American bishop. He was the 25th Presiding Bishop of the Episcopal Church.

Berkeley Divinity School, founded in 1854, is a seminary of the Episcopal Church, based in New Haven, Connecticut.

John Williams was the eleventh Presiding Bishop of the Protestant Episcopal Church in the United States of America.

Horatio Southgate was born in Portland, Maine, and studied for the ordained ministry at Andover Theological Seminary as a Congregationalist. In 1834 he became a member of the Episcopal Church in the United States of America, and was subsequently ordained to the diaconate in 1835. He was ordained to the priesthood in 1839 after an unusually long period as a deacon in this period of Anglican history, and also completed post-graduate studies at Columbia College, earning a Doctorate of Divinity degree in 1845.

Andrew Brian McGowan is an Australian scholar of early Christianity and an Anglican priest. He is McFaddin Professor of Anglican Studies at Yale Divinity School and Dean and President of the Berkeley Divinity School at Yale.

Charles Minnigerode Beckwith was fourth bishop of the Episcopal Diocese of Alabama from 1902 till 1928.

Jeffery William Rowthorn is a Welsh retired Anglican bishop and hymnographer. His early career was spent in parish ministry in the Diocese of Southwark and the Diocese of Oxford of the Church of England. He then moved to the United States where he worked at two seminaries: Union Theological Seminary in New York City, and Berkeley Divinity School in New Haven, Connecticut. He was elected a bishop in the Episcopal Church, serving as a suffragan bishop of the Episcopal Diocese of Connecticut from 1987 to 1994, and as Bishop in Charge of the Convocation of Episcopal Churches in Europe from 1994 to 2001.

Thomas Augustus Fraser Jr. was eighth bishop of the Episcopal Diocese of North Carolina from 1965 to 1983.

Dorsey Winter Marsden McConnell is an American Anglican bishop. He became bishop diocesan in the Episcopal Diocese of Pittsburgh after the Rt. Rev. Robert Duncan was deposed for abandoning communion with the Episcopal Church as part of the Anglican realignment of disaffected theological conservatives in 2008.

Norman Burdett Nash was the tenth bishop of Massachusetts in The Episcopal Church.

Charles Farmer Duvall was bishop of the Episcopal Diocese of the Central Gulf Coast from 1981 to 2001. He was consecrated on April 11, 1981.

George Alfred Taylor was an American prelate who served as the sixth Bishop of Easton between 1967 and 1975.