Thomas Wiswall (1601–1683) was an early settler of British America, a prominent early citizen of the Massachusetts Bay Colony, and a key figure in the founding of Cambridge Village, now known as the city of Newton, Massachusetts.

Wiswall was baptised in Warrington, Lancashire, England on 30 September 1601. He married Elizabeth Berbage in 1632, and had ten children: [1]

Wiswall left Dorchester and resettled in Cambridge, Massachusetts, some time in 1654. [4] In 1654, he sublet a 400-acre (1.6 km2) tract of land there from Captain Thomas Prentice. This land had been the property of the recently deceased John Haynes, former Governor of the Massachusetts Bay Colony and later Governor of the Colony of Connecticut, and Prentice was the lessee and not the owner. [5] Wiswall built a new homestead that year, beside the Dedham Trail (now Centre Street), on the south shore of a lake located on that tract of land. This was the first house to be built on the shore of what would be known—for 150 years—as Wiswall's Pond. [5] [6] The lake is now known as Crystal Lake, in Newton, Massachusetts.

John Jackson (the first settler in the area) [4] [7] [8] donated an acre of land to be used as a burying place and for a meeting house. [9] Wiswall built this meeting house, where today the East Parish Burying Ground (also known as the Centre Street Cemetery) and the First Settlers Monument are currently located.

In 1656, Wiswall and John Jackson signed a petition for release from supporting the church at Cambridge. [2] [10] This was the beginning of a movement for the area to become a separate and distinct entity from Cambridge. After a struggle that lasted for 32 years, these efforts were ultimately successful. In 1688, the area became formally known as Cambridge Village. [5] [11] Cambridge Village was renamed Newtown in 1691, and finally Newton in 1766. [12]

Wiswall started the Cambridge Village Church, and was installed first ruling elder and assistant pastor on 20 July 1664. [2] He also served as Fence Viewer and surveyor of roads for the area. [13]

Wiswall died in Cambridge Village on 6 December 1683. He is buried in the East Parish Burying Ground in Newton. [14] His second wife, Isabella Farmer (a widow from Ansley, Warwickshire, England), survived him and died in Billerica, Massachusetts, in May 1686. [3] 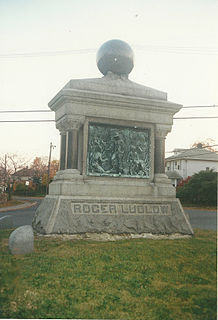 William Hutchinson (1586–1641) was a judge in the Colonial era settlement at Portsmouth on the island of Aquidneck. Aquidneck Island was known at the time as Rhode Island, and it later became part of the Colony of Rhode Island and Providence Plantations.

Oak Hill Park (OHP) is a residential subdivision located in the Oak Hill village of Newton, Middlesex County, Massachusetts. Oak Hill Park is shown as a separate and distinct village on some city maps, including a map dated 2012 on the official City of Newton website. Situated adjacent to Boston, Oak Hill Park is roughly bounded by Mount Ida College to its northwest, Dedham Street to the northeast, the Charles River to the southwest, and Mount Lebanon Cemetery and the Boston city limit to the southeast.

Nicholas Easton (c.1593–1675) was an early colonial President and Governor of Rhode Island. Born in Hampshire, England, he lived in the towns of Lymington and Romsey before immigrating to New England with his two sons in 1634. Once in the New World, he lived in the Massachusetts Bay Colony towns of Ipswich, Newbury, and Hampton. Easton supported the dissident ministers John Wheelwright and Anne Hutchinson during the Antinomian Controversy, and was disarmed in 1637, and then banished from the Massachusetts colony the following year. Along with many other Hutchinson supporters, he settled in Portsmouth on Aquidneck Island, later a part of the Colony of Rhode Island and Providence Plantations. He was in Portsmouth for about a year when he and eight others signed an agreement to create a plantation elsewhere on the island, establishing the town of Newport.

Peter Bulkley was an influential early Puritan minister who left England for greater religious freedom in the American colony of Massachusetts. He was a founder of Concord, and was named by descendant Ralph Waldo Emerson in his poem about Concord, Hamatreya.

Phillips Payson (1704–1778) was an American Congregationalist minister for the town of Walpole, Province of Massachusetts Bay. He is the ancestor of many distinguished clergymen of New England.

William Phelps, was a Puritan who emigrated from Crewkerne, England in 1630, one of the founders of both Dorchester, Boston Massachusetts and Windsor, Connecticut, and one of eight selected to lead the first democratic town government in the American colonies in 1637. He was foreman of the first grand jury in New England, served most of his life in early colonial government, and according to noted historian Henry Reed Stiles, Phelps "was one of the most prominent and highly respected men in the colony."

Nicholas Upsall was an early Puritan immigrant to the American Colonies, among the first 108 Freemen in colonial America. He was a trusted public servant who after 26 years as a Puritan, befriended persecuted Quakers and shortly afterwards joined the movement. He was banished from Massachusetts at 60 years of age and helped to found the first Monthly meeting of Friends in the United States at Sandwich, Massachusetts.

Henry Bull (1610–1694) was an early colonial Governor of Rhode Island, serving for two separate terms, one before and one after the tenure of Edmund Andros under the Dominion of New England. Sailing from England as a young man, Bull first settled in Roxbury in the Massachusetts Bay Colony, but soon became a follower of the dissident ministers John Wheelwright and Anne Hutchinson, and was excommunicated from the Roxbury church. With many other followers of Hutchinson, he signed the Portsmouth Compact, and settled on Aquidneck Island in the Narragansett Bay. Within a year of arriving there, he and others followed William Coddington to the south end of the island where they established the town of Newport.

Reverend Ichabod Wiswall (1637–1700) was the third pastor of the church in Duxbury, Plymouth Colony, British America. Though he is thought to have given the first known funeral sermon in British America at the burial of Capt. Jonathan Alden in 1697, American funeral sermons predate this event by several decades.

Edward Hutchinson (1613–1675) was the oldest child of Massachusetts and Rhode Island magistrate William Hutchinson and his wife, the dissident minister Anne Hutchinson. He is noted for making peace with the authorities following his mother's banishment from Massachusetts during the Antinomian Controversy, returning to Boston, and ultimately dying in the service of the colony that had treated his family so harshly. 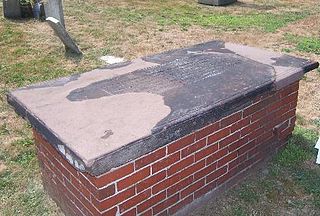 Major-General Humphrey Atherton, an early settler of Dorchester, Massachusetts, held the highest military rank in colonial New England. He first appeared in the records of Dorchester on March 18, 1637 and made freeman May 2, 1638. He became a representative in the General Court in 1638 and 1639–41. In 1653, he was Speaker of the House, representing Springfield, Massachusetts. He was chosen assistant governor, a member of the lower house of the General Court who also served as magistrate in the judiciary of colonial government, in 1654, and remained as such until his death." He was a member of the Ancient and Honorable Artillery Company of Massachusetts and held the ranks of lieutenant and captain for several years before rising to the rank of major-general. He also organized the first militia in Massachusetts.

John Greene Sr. was an early settler of the Colony of Rhode Island and Providence Plantations, one of the 12 original proprietors of Providence, and a co-founder of the town of Warwick in the colony, sailing from England with his family in 1635. He first settled in Salem in the Massachusetts Bay Colony, but he had difficulty with the Puritan authority and soon followed Roger Williams to Providence, becoming one of the original proprietors of that town. In 1643, he joined Samuel Gorton and ten others in purchasing land that became the town of Warwick. Difficulties with Massachusetts ensued, until he accompanied Gorton on a trip to England where they secured royal recognition of their town.

Thomas Loring was an early settler of Hingham and Hull, Massachusetts. He was present at some of the key moments in the earliest history of Hingham, Massachusetts. But later "[t]he large Loring families were prominent in the town [of Hull], and remained into the 20th century." As early as 1893 he was recognized as "the progenitor of the families bearing this surname by birth in eastern Mass., and prob. throughout New Eng." His descendants include individuals on both sides of the American Revolution, the US Civil War, and today live across North America, Spain, England and Australia.

William Freeborn (1594–1670) was one of the founding settlers of Portsmouth on Aquidneck Island, having signed the Portsmouth Compact with 22 other men while still living in Boston. Coming from Maldon in Essex, England, he sailed to New England in 1634 with his wife and two young daughters, settling in Roxbury in the Massachusetts Bay Colony. He soon moved to Boston where he became interested in the preachings of the dissident ministers John Wheelwright and Anne Hutchinson, and following their banishment from the colony during the Antinomian Controversy, he joined many of their other followers in Portsmouth.

Edward Hutchinson was a mercer and a resident of Lincolnshire, England, most noted for the careers of his children in New England. While his father and several of his uncles and brothers became prominent as clergymen, aldermen, sheriffs, and mayors in the city of Lincoln, Edward focused his efforts on his business after moving to the town of Alford. Remarkably, not a single record for him has been found in Alford, other than his burial and the baptisms of his 11 children, but he likely gained a considerable estate, and his children married into prominent families. What was most exceptional about Edward Hutchinson occurred following his 1632 death. Beginning in 1634, five of his nine surviving children and his widow immigrated to New England, and all six of them were exiled from the Massachusetts Bay Colony as a result of the events of the Antinomian Controversy from 1636 to 1638. From Boston two of his children went south and became founding settlers of the Colony of Rhode Island and Providence Plantations, and three of them, with his widow, went north to establish Exeter in the Province of New Hampshire, and then proceeded to Wells, Maine. Because of their involvement in the controversy, his children had a disproportionately large role in the establishment of these new settlements in New England.