He married Elizabeth Jones and was grandfather of Thomas Wood (1777–1860).

He was a barrister, later made Treasurer of the Inner Temple.

St John's Wood is a district in the City of Westminster, west London, lying about 2.5 miles northwest of Charing Cross. Traditionally the northern part of the ancient parish and Metropolitan Borough of Marylebone, it extends east to west from Regent’s Park to the Edgware Road, with the Swiss Cottage area of Hampstead lying to the north.

Middlesex is a historic county in southeast England. Its area is almost entirely within the wider urbanised area of London and mostly within the ceremonial county of Greater London, with small sections in neighbouring ceremonial counties. It was established in the Anglo-Saxon period from the territory of the Middle Saxons, and existed as an official administrative unit until 1965. The county is bounded to the south by the River Thames, and has the rivers Colne and Lea and a ridge of hills forming its other boundaries. The largely low-lying county, dominated by clay in its north and alluvium on gravel in its south, was the second smallest by area in 1831. 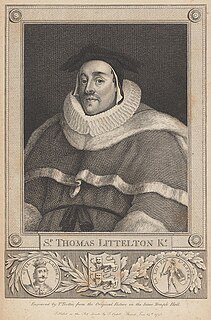 Sir Thomas de Littleton or de Lyttleton was an English judge and legal writer from the Lyttelton family.

Elstree is a village in the Hertsmere borough of Hertfordshire, England. It is about 13 miles northwest of central London on the former A5 road, that follows the course of Watling Street. In 2011, its population was 5,110. It forms part of the civil parish of Elstree and Borehamwood, originally known simply as Elstree.

Three baronetcies have been created in the Baronetage of England for members of the Littleton or Lyttelton family. All three lines are descended from Thomas de Littleton, a noted 15th-century jurist. Despite differences in spelling of the title, the names of all three lines were spelt in many varied ways in the early modern period, without distinction between the different branches of the family. This can be confusing, as the range of forenames in use was very limited.

Littleton is a village in the borough of Spelthorne, Surrey, England. Its amenities are a Church of England parish church, village green and Shepperton Studios. It covers the narrow east-west strip of land between all parts of Shepperton Green to the south and the Queen Mary Reservoir to its north, having contributed most of the land to the reservoir in 1931 and having historically reached to the River Thames at Chertsey Bridge.

Herbert Francis Hore was an Irish historian, archaeologist, and author, born at County Wexford, Ireland. The Hore family, of which he was a member, were relatively large landowners and first arrived in Co. Wexford in the early stages of the Anglo-Norman invasion of Ireland and from that time onwards they played a prominent role in the history of the county.

Richard Salwey was an English politician who sat in the House of Commons variously between 1645 and 1659. He was a republican in politics and fought on the Parliamentary side in the English Civil War.

Lieutenant-General Thomas Wood was a British Army officer and a Conservative politician who sat in the House of Commons from 1837 to 1847.

Thomas Wood was an English Tory and later Conservative politician who sat in the House of Commons from 1806 to 1847.

Humphrey Salwey (1575–1652) was an English politician who sat in the House of Commons from 1640 to 1652. He supported the Parliamentary side in the English Civil War.

Sir Littleton Powys FRS was a Justice of the King's Bench.