The Rt Rev Claude Thomas Thelluson Wood MC (27 February 1885 – 17 January 1961) was an eminent Bishop in the mid part of the twentieth century.

He was born on 27 February 1885 and educated at Eton and Trinity College, Cambridge. [1] After a curacy at Hatfield he spent ten years in the Army Chaplains' Department to the Territorial Army. He was in France from 1915 where he was awarded the Military Cross 'for service in the Field' and was Mentioned in Despatches. His service was summarised in 1918 as 'good report'. [2]

He served as vicar at Croydon and Tring and was then successively Rural Dean of Berkhamsted, Archdeacon of St Albans [3] and then Bishop of Bedford. Wood was recommended for the post in 1948 by the Bishop of St Albans who, in his letter to the Prime Minister, referred to Wood's service in the Great War. [4] Clement Attlee, like Winston Churchill, preferred men who had shown their mettle in the Great War. Wood remained in post for only 5 years because of a car crash in which he damaged his pelvis. He died on 17 January 1961.'His was one of the most unspectacular of careers of service which are the greatest strength of the Church', wrote the Church Times obituarist. [5] 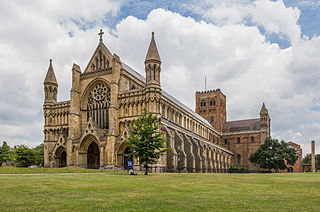 St Albans Cathedral, officially the Cathedral and Abbey Church of St Alban but often referred to locally as "the Abbey", is a Church of England cathedral in St Albans, England. Much of its architecture dates from Norman times. It ceased to be an abbey following its dissolution in the 16th century and became a cathedral in 1877. Although legally a cathedral church, it differs in certain particulars from most other cathedrals in England, being also used as a parish church, of which the dean is rector with the same powers, responsibilities and duties as that of any other parish. At 85 metres long, it has the longest nave of any cathedral in England.

Germanus of Auxerre ; c. 378 – c. 442–448 AD) was a bishop of Auxerre in Late Antique Gaul. He abandoned a career as a high-ranking government official to devote his formidable energy towards the promotion of the church and the protection of his 'flock' in dangerous times: personally confronting, for instance, the barbarian king "Goar". In Britain he is best remembered for his journey to combat Pelagianism in or around 429 AD, and the records of this visit provide valuable information on the state of post-Roman British society. He also played an important part in the establishment and promotion of the Cult of Saint Alban. The saint was said to have revealed the story of his martyrdom to Germanus in a dream or holy vision, and Germanus ordered this to be written down for public display. Germanus is venerated as a saint in both the Roman Catholic and Orthodox churches, which commemorate him on 31 July. 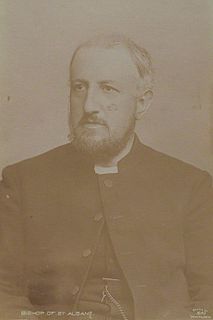 Edgar Jacob was an English churchman, who became Bishop of Newcastle and then Bishop of St Albans. 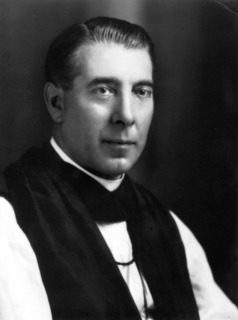 Frank Theodore Woods, DD was a Church of England bishop. He was the Bishop of Peterborough from 1916 to 1923 before being translated to the see of Winchester, where he remained until his death.

Timothy John Bavin is a British Anglican bishop and monk. He was the bishop of Anglican Diocese of Johannesburg from 1974 to 1985. He was then Bishop of Portsmouth from 1985 to 1995.

Arthur Ivan Greaves was an Anglican bishop in the mid 20th century.

Patrick Burnet Harris was a Church of England bishop who served in two episcopal positions.

Claude Martin Blagden was an eminent Anglican bishop in the first half of the 20th century. 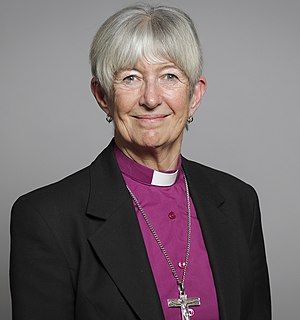 St Alban's Anglican Church is a heritage-listed and active Anglican church at 171 Great North Road, Five Dock in Sydney, New South Wales, Australia. The property spans back to the early days of British settlement in Australia. The site underwent multiple evolutions and renovations until it became originally included in St Phillip's Parish on 23 June 1802. The foundation stone of the church building was laid on 17 September 1858. The church building was intended to be divided into two parts, as a Parochial School and a Mission Church. The church's life and management relied heavily on the 'mother church' of the district, being St John's, Ashfield which was in close proximity to St Alban's and shared rectors over both sites.