He was born in Peterborough of Roman Catholic parents, and studied art in London as a pupil of the Genoese refugee Alessandro Maria Grimaldi (1659−1732). He painted portraits of his master Grimaldi and his master's wife about 1720. He married Grimaldi's daughter, and remained on close terms with Alexander Grimaldi, his master's son. Subsequently, he received instruction from Louis Peter Boitard. About 1736 Worlidge and the younger Grimaldi are said to have visited Birmingham, where Worlidge reintroduced the art of painting on glass. For a time, too, he seems to have practised portrait painting at Bath, Somerset.

About 1740 Worlidge settled in London in the neighbourhood of Covent Garden, where he remained for the rest of his life. At one time Worlidge's address was ‘at the Piazza, Covent Garden.’ He afterwards resided in Bedford Street and King Street in the same neighbourhood.

In 1763 he settled in Great Queen Street in a large house built by Inigo Jones, adjoining the later site of the Freemasons' Tavern. Worlidge became obese and a drinker in later life, and suffered from gout. In his last years he spent much of his leisure in a country house situated in Messrs. Kennedy & Leigh's nursery-ground at Hammersmith. There he died on 23 September 1766, and was buried in Hammersmith church. A plain marble slab, inscribed with verses by William Kenrick, was placed on the wall of the church; it is now at the east end of the south aisle.

His portraits in oil and pastel enjoyed some vogue, his first reputation was made by his miniature portraits. In middle life his most popular work consisted of heads in blacklead pencil, for which he charged two guineas; leaders of fashionable society employed him to make these drawing. Later he concentrated his energies on etching in the style of Rembrandt, using a dry-needle with triangular point. He copied some of Rembrandt's prints, among them the artist's portrait of himself and the hundred-guelder plate. An etching after Rembrandt's portrait of Sir John Astley was described by Horace Walpole as Worlidge's ‘best piece.’ Worlidge drew a pencil portrait of himself, which is reproduced in Walpole's Anecdotes (edition by Ralph Nicholson Wornum). Examples of Worlidge's drawings and etchings are in the British Museum print-room. There is also there a priced catalogue of a selection of his etchings.

One of Worlidge's most popular plates depicted the installation of John Fane, 7th Earl of Westmorland as chancellor of the university at the Sheldonian Theatre at Oxford in 1761. Worlidge represents himself in the gallery on the right in the act of drawing the scene with his second wife beside him. In the corresponding place on the left-hand side of the plate is a portrait of his brother-in-law, Alexander Grimaldi. Most of the numerous heads and figures are portraits. A plate of the bust of Cicero at Oxford (known as the Pomfret bust) also enjoyed a wide vogue.

In April 1754 Worlidge had a large collection of his works to be sold by public auction. The printed catalogue bore the title, ‘A Collection of Pictures painted by Mr. Worlidge of Covent Garden, consisting’ ‘of Histories, Heads, Landscapes, and Dead Game, and also some Drawings.’ The highest price fetched was £51 15s. 6d., which was given for a ‘fine head’ after Rembrandt. More than sixteen hundred prints and more than thirteen hundred drawings by Worlidge were sold by Abraham Langford in March 1767 by order of his widow.

Worlidge's last work was his Antique Gems, a series of 182 etchings of gems from the antique (three are in duplicate). The series was published in parts, some of which seem to have been issued as early as 1754; but Worlidge died before the work was completed. It was finished by his pupils William Grimaldi and George Powle, and, printed on satin, was published by his widow in 1768 at the price of eighteen guineas a copy. [1] The frontispiece, dated 1754, shows Worlidge drawing the Pomfret bust of Cicero; behind on an easel is a portrait of his second wife, Mary. No letterpress was included originally in the volume, but between 1768 and 1780 a few copies were issued with letterpress. After 1780 a new edition, but bearing the original date of 1768, appeared with letterpress in two volumes at five guineas each. The title-page omits mention of ‘M. Wicksteed's’ name, but is otherwise a replica of the first. Some of the old copper plates (108 in all) were reproduced in ‘Antique Gems, etched by T. Worlidge on Copper Plates, in the Possession of Sheffield Grace, Esq.,’ London, 1823, (privately printed). Charles William King in his Antique Gems (1872, i. 469) thought Worlidge's plates often inferior to those of Jonathan Spilsbury, and that the descriptions placed below contained some blunders.

He married in 1763 his third wife, Elizabeth Wicksteed, daughter of a toyman of Bath, and apparently sister of the well-known seal engraver there. She assisted Worlidge in his artistic work, and gained a reputation for herself by her skill in copying paintings in needlework. After Worlidge's death she carried on the sale of his etchings at his house in Great Queen Street; but she let the mansion to Hester Darby and her daughter, Mary Robinson ('Perdita'), on her marriage to a wine and spirit merchant named Ashley, who had been one of Worlidge's friends.

Worlidge is said to have had thirty-two children by his three marriages, but only Thomas, a son by his third wife, survived him. This son married, in 1787, Phoebe, daughter of Alexander Grimaldi (1714−1800); she was buried in Bunhill Fields on 14 January 1829. Her husband migrated to the West Indies in 1792. In March 1826 he was again in London, and while employed as compositor in the office of the Morning Advertiser was sent to prison for an assault. His father drew a portrait of him, which bore the title ‘A Boy's Head.’ 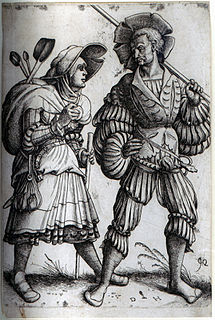 Etching is traditionally the process of using strong acid or mordant to cut into the unprotected parts of a metal surface to create a design in intaglio (incised) in the metal. In modern manufacturing, other chemicals may be used on other types of material. As a method of printmaking, it is, along with engraving, the most important technique for old master prints, and remains in wide use today. In a number of modern variants such as microfabrication etching and photochemical milling it is a crucial technique in much modern technology, including circuit boards. 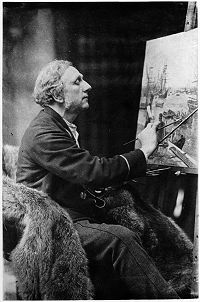 Sir Francis Seymour Haden PPRE, was an English surgeon, best known as an original etcher who championed original printmaking. He was at the heart of the Etching Revival in Britain, and one of the founders of the Society of Painter-Etchers, now the Royal Society of Painter-Printmakers, as its first president. He was also a collector and scholar of Rembrandt's prints.

The etching revival was the re-emergence and invigoration of etching as an original form of printmaking during the period approximately from 1850 to 1930. The main centres were France, Britain and the United States, but other countries, such as the Netherlands, also participated. A strong collector's market developed, with the most sought-after artists achieving very high prices. This came to an abrupt end after the 1929 Wall Street crash wrecked what had become a very strong market among collectors, at a time when the typical style of the movement, still based on 19th-century developments, was becoming outdated. 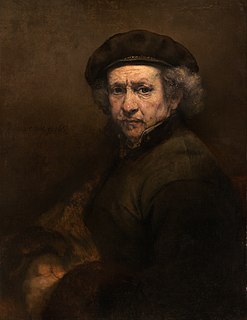 Rembrandt Harmenszoon van Rijn, usually simply known as Rembrandt, was a Dutch Golden Age painter, printmaker and draughtsman. An innovative and prolific master in three media, he is generally considered one of the greatest visual artists in the history of art and the most important in Dutch art history. Unlike most Dutch masters of the 17th century, Rembrandt's works depict a wide range of style and subject matter, from portraits and self-portraits to landscapes, genre scenes, allegorical and historical scenes, and biblical and mythological themes as well as animal studies. His contributions to art came in a period of great wealth and cultural achievement that historians call the Dutch Golden Age, when Dutch art, although in many ways antithetical to the Baroque style that dominated Europe, was extremely prolific and innovative and gave rise to important new genres. Like many artists of the Dutch Golden Age, such as Jan Vermeer of Delft, Rembrandt was also an avid art collector and dealer.

Frederick Christian Lewis (1779–1856) was an English etcher, aquatint and stipple engraver, landscape and portrait painter and the brother of Charles Lewis (1786–1836). 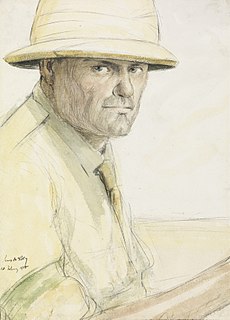 James McBey was a largely self-taught artist and etcher whose prints were highly valued during the later stages of the etching revival in the early 20th century. He was awarded an Honorary Doctor of Letters by Aberdeen University. 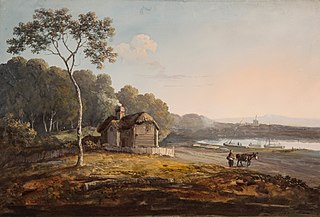 John Laporte was an English landscape painter and etcher, who worked in and around London, England. 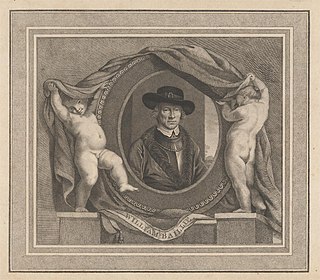 William Baillie (1723–1810) often known as "Captain William Baillie" was an Irish printmaker, known especially for works in the style of, or directly copied from, the etchings of Rembrandt. Usually described as an amateur artist, he was an officer in the British Army until 1761, and later held the post of Commissioner of Stamps. He also acted as an agent for art collectors, most notably Lord Bute.

The Hundred Guilder Print is an etching by Rembrandt. The etching's popular name derives from the large sum of money supposedly once paid for an example. It is also called Christ healing the sick, Christ with the Sick around Him, Receiving Little Children, or Christ preaching, since the print depicts multiple events from Matthew 19, including Christ healing the sick, debating with scholars and calling on children to come to him. The rich young man mentioned in the chapter is leaving through the gateway on the right.

John Swaine, was an English draughtsman and engraver. 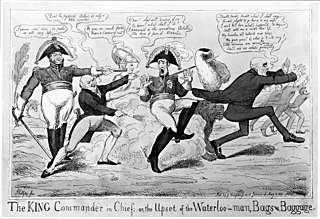 John Phillips was an English artist and illustrator. He is perhaps best known as a satirical etcher.

Richard Dagley (c.1761–1841) was an English subject painter and illustrator. 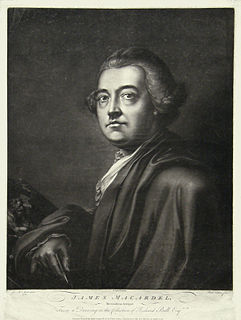 Arthur Pond was an English painter and engraver.

The dozens of self-portraits by Rembrandt were an important part of his oeuvre. Rembrandt created approaching one hundred self-portraits including over forty paintings, thirty-one etchings and about seven drawings; some remain uncertain as to the identity of either the subject or the artist, or the definition of a portrait.

Edward Pryce Owen was an English artist and Church of England clergyman. He was the only son of Archdeacon Hugh Owen (1761–1827) by his wife Harriett née Jeffreys. He was the twenty-fifth in male descent from Edwin of Tegeingl, founder of the noble tribe of Powis. He was educated at St. John's College, Cambridge, where he graduated with a B.A. in 1810 and an M.A in 1816. After officiating for some time at Park Street Chapel, Grosvenor Square, London, he became vicar of Wellington, and rector of Eyton upon the Weald Moors, Shropshire, holding these livings from 27 February 1823 till 1840. While travelling in France and Belgium, and in Italy, the Levant, Germany, and Switzerland, he made numerous drawings, from which he afterwards produced etchings and pictures in oils.