Thomas Wyatt Turner (March 16, 1877 – April 21, 1978) was an American civil rights activist, biologist and educator. He was the first black American to receive a PhD in Botany, and helped found both the NAACP and the Federated Colored Catholics.

He was born in Hughesville, Maryland. [1] His parents, Eli and Linnie (née Gross) were sharecroppers and he was the fifth of their nine children. [2] When he was eight, his father died and he was sent to live with an aunt and uncle, James Henry and Rose Turner. Turner worked in the fields but also attended Episcopal local schools from 1892 onwards after Catholic schools refused to admit him because of his race. From 1895 - 1897 he attended the Howard University Preparatory School. [1]

He studied at Howard University gaining B. S. (1901) and M. A. (1905) degrees. [2] In 1901 he attended the Catholic University of America briefly to further improve his scientific knowledge but had to leave because it was too expensive. [1] In 1921 he was awarded Ph. D. in botany by Cornell University the first black person to gain a doctorate from Cornell. The thesis was entitled The physiological effects of salts in altering the ratio of top to root growth and came from work done with Otis Freeman Curtis during summer leaves-of-absence from his post as Dean at Howard University. [2] - His first wife was Laura Miller. In 1936 he married Louise Wright. [2]

After graduation, Turner headed to the Tuskegee Institute, Alabama at the request of Booker T. Washington, where he taught academics in biology for a year. [1] From 1902 he gave service to various public schools in Baltimore, Maryland for a decade, except for a year (1910-1911) at the St Louis High School in St Louis, Missouri. From 1914 to 1924, he served as a Professor of Botany at Howard University in Washington, D.C., which had provided courses in botany since 1867. [1] [2] He was the founding head when the Department of Botany was established in 1922. [3] He also served from 1914 to 1920 as Acting Dean at the Howard's School of Education. As well as biology he felt that the mentorship provided by teachers and faculty had a vital impact on student's careers. [1] Turner was initiated as a member of Phi Beta Sigma fraternity in 1915.

While working at Cornell University in 1918, Turner worked for the U.S. Department of Agriculture in Maine, where he examined potato fields. The American government consulted Turner throughout his career about agricultural problems. Under the auspices of the United States Secretary of Agriculture, Turner worked as a collaborator on Virginia's plant diseases. In 1931, Turner organized the Virginia Conference of College Science Teachers in 1931, and served as president of that group for two terms. Turner also was an active member of the American Association for the Advancement of Science and of the American Society for Horticultural Science.

Turner was also known as an activist who was a staunch defender of black rights and civil liberties. His activism, curiously, has overshadowed his many scientific accomplishments. In 1909, he was a founding member of the National Association for the Advancement of Colored People (NAACP) [2] as the first secretary of the Baltimore branch, and was also active in promoting the right of blacks to vote. He continued this activism after his appointment to Howard University. In 1915 he organised a city–wide membership drive for the Washington NAACP. [1] He was eventually honored with a lifetime membership in the NAACP.

Turner was active in Catholic organizations and in societies for the advancement of African-Americans. He remained a loyal member of the Roman Catholic Church despite suffering discrimination: he wrote of being asked to move to the back of the church when attending Mass in St. Louis in 1926. From 1915 to 1935, alone and as a member of the Committee of Fifteen, he lobbied the Catholic University of America to admit black students and for the Catholic church to provide high school education for black Catholic children and a route to the priesthood for young black men who had a vocation (specifically the Josephie Fathers at St Mary's seminary in Baltimore). [1] On December 29, 1924, [1] Turner founded, and was elected president of, the Federated Colored Catholics, an organization that he said was "composed of Catholic Negroes who placed their services at the disposal of the Church for whatever good they were able to effect in the solution of the problems facing the group in Church and country". [5]

In 1976, at age 99, Turner was awarded an honorary doctorate by The Catholic University of America. [1]

His papers and unpublished autobiograph are among the Turner Papers at the Moorland–Spingarn Research Center. [1]

From 1976 the annual Dr. Thomas Wyatt Turner Award is given by the Secretariat of the National Office of Black Catholics in Washington, D. C. for work towards equal rights. [1]

The Cornell Graduate School created the Turner Kittrell Medal of Honor for alumni who have made significant national or international contributions to the advancement of diversity, inclusion and equity in academia, industry or the public sector. [4] The first award was in 2017.

Mordecai Wyatt Johnson was an American educator and pastor. He served as the first black president of Howard University, from 1926 until 1960. Johnson has been considered one of the three leading African-American preachers of the early 20th-century, along with Vernon Johns and Howard Thurman.

John Hope, born in Augusta, Georgia, was an American educator and political activist, the first African-descended president of both Morehouse College in 1906 and of Atlanta University in 1929, where he worked to develop graduate programs. Both are historically black colleges.

Benjamin Lawson Hooks was an American civil rights leader. A Baptist minister and practicing attorney, he served as executive director of the National Association for the Advancement of Colored People (NAACP) from 1977 to 1992, and throughout his career was a vocal campaigner for civil rights in the United States.

Edward Franklin Frazier, was an American sociologist and author, publishing as E. Franklin Frazier. His 1932 Ph.D. dissertation was published as a book titled The Negro Family in the United States (1939); it analyzed the historical forces that influenced the development of the African-American family from the time of slavery to the mid-1930s. The book was awarded the 1940 Anisfield-Wolf Book Award for the most significant work in the field of race relations. It was among the first sociological works on blacks researched and written by a black person.

The Society of St. Joseph of the Sacred Heart (S.S.J.) is a society of Catholic priests and brothers headquartered in Baltimore. The members are called Josephites and work specifically among African-Americans.

Rayford Whittingham Logan was an African-American historian and Pan-African activist. He was best known for his study of post-Reconstruction America, a period he termed "the nadir of American race relations". In the late 1940s he was the chief advisor to the National Association for the Advancement of Colored People (NAACP) on international affairs. He was professor emeritus of history at Howard University.

Edwin Bancroft Henderson, was an American educator and National Association for the Advancement of Colored People (NAACP) pioneer. The "Father of Black Basketball," introduced basketball to African Americans in Washington, D.C. in 1904, and was Washington's first male African American physical education teacher. From 1926 until his retirement in 1954, Henderson served as director of health and physical education for Washington D.C.'s black schools. An athlete and team player rather than a star, Henderson both taught physical education to African Americans and organized athletic activities in Washington, D.C. and Fairfax County, Virginia, where his grandmother lived and where he returned with his wife in 1910 to raise their family. A prolific letter writer both to newspapers in the Washington D.C. metropolitan area and Alabama, Henderson also helped organize the Fairfax County branch of the NAACP and twice served as President of the Virginia NAACP in the 1950s. 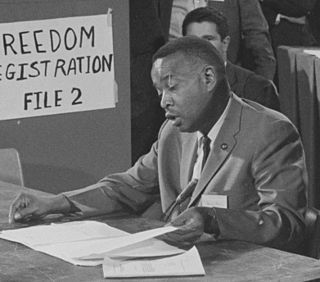 Flemmie Pansy Kittrell was the first African-American woman to earn a Ph.D. in nutrition. Her research focused on such topics as the levels of protein requirements in adults, the proper feeding of black infants, and the importance of preschool enrichment experiences for children.

Russell L. Adams, an American author and professor. He is the Chairman of the Afro-American Studies Department at Howard University, Washington, D.C.

William Montague Cobb (1904–1990) was a board-certified physician and a physical anthropologist. As the first African American Ph.D in anthropology, and the only one until after the Korean War, his main focus in the anthropological discipline was studying the idea of race and its negative impact on communities of color. His career both as a physician and a professor at Howard University was dedicated to the advancement of African American researchers and he was heavily involved in civil rights activism. Cobb wrote prolifically and contributed both popular and scholarly articles during the course of his career. His work has been noted as a significant contribution to the development of the sub-discipline of biocultural anthropology during the first half of the 20th Century. Cobb was also an accomplished educator and taught over 5000 students in the social and health sciences during his lifetime. 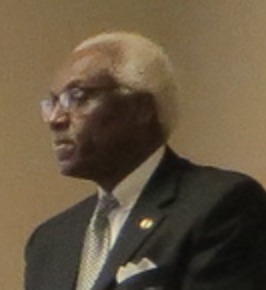 Leslie Burl McLemore is an American civil rights activist and political leader from Jackson, Mississippi. He served as interim mayor of Jackson following the death of Frank Melton on May 7, 2009 until the inauguration of re-elected mayor Harvey Johnson, Jr. on July 3, 2009. 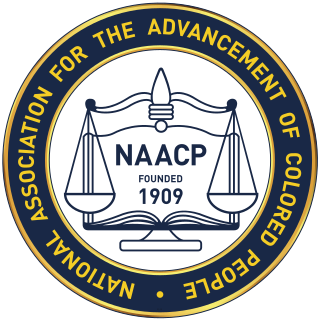 The National Association for the Advancement of Colored People (NAACP) is a civil rights organization in the United States, formed in 1909 as an interracial endeavor to advance justice for African Americans by a group including W. E. B. Du Bois, Mary White Ovington, Moorfield Storey and Ida B. Wells.

William Robert Ming Jr. was an American lawyer, attorney with the National Association for the Advancement of Colored People (NAACP) and law professor at University of Chicago Law School and Howard University School of Law. He is best remembered for being a member of the Brown v. Board of Education litigation team and for working on a number of the important cases leading to Brown, the decision in which the United States Supreme Court ruled de jure racial segregation a violation of the Equal Protection Clause of the Fourteenth Amendment of the United States Constitution. In 1974, the NAACP created the William Robert Ming Advocacy Award to be awarded annually to a lawyer "who exemplifies the spirit of financial and personal sacrifice that Mr. Ming displayed in his legal work for the NAACP."

D. Augustus Straker was a black lawyer and jurist.

Marguerite Thomas Williams was an American geologist. She was the first African American to earn a doctorate in geology in the United States.

Otis Freeman Curtis was an American botanist and plant physiologist, at the State Agricultural Experimental Station, and professor of botany at Cornell University. He made important contributions to the study of translocation.

Xuemei Chen is a Chinese-American molecular biologist. She is the Furuta Chair Professor in the Department of Botany and Plant Sciences at the University of California, Riverside. She was elected to the US National Academy of Sciences in 2013.

Franklin v. South Carolina, 218 U.S. 161 (1910), was the trial of Pink Franklin for the murder of South Carolina Constable Henry H. Valentine in 1907. Franklin was a sharecropper who wished to leave his employer although his employer had advanced Franklin wages under a contract based on the so-called "peonage laws". A warrant was obtained and when Valentine came to the house, a shootout occurred, killing Valentine and injuring Franklin, his wife Patsy, and another constable who was there. The defense included claims that Franklin acted in self-defense and that the peonage laws were unjust. In appeal, the defense claimed that the make-up of the jury, all white based on the requirement that the jury be based on those who were eligible to vote, was based on unconstitutional racism in election laws stemming from the 1895 South Carolina constitution. Franklin's conviction was upheld in all appeals, including the appeal before the United States Supreme Court heard in April 1910.