Thomas Wylie may refer to:

The Abbot of Kelso was the head of the Tironensian monastic community at Kelso Abbey in the Scottish Borders. Originally, he was the Abbot of Selkirk, because from its foundation in 1113 by David, Prince of the Cumbrians (1113–1124) until it was moved to Kelso by David and John, bishop of Glasgow in 1127. The abbot was the first in Scotland to be granted the mitre in 1165. In the 16th century the monastery increasingly came under secular control, and finally in 1607 it was granted as a secular lordship (Holydean) to its last commendator, Robert Ker of Cesford, later earl of Roxburghe. The following is a list of abbots and commendators:

The Prior of Loch Leven was the head of lands and of the community Augustinian canons of St Serf's Inch Priory, Loch Leven. There was a Scottish Céli Dé establishment there in the first half of the 12th century, allegedly found by Bruide, son of Dargart, King of the Picts (696–706). When the Augustinian priory was founded in 1150, the Scottish monks were absorbed into the established and those who refused to join were to be expelled. Not all of the priors are known. The most famous prior undoubtedly was the chronicler, Andrew de Wyntoun. Following more than four centuries of Augustinian monastic life and the resignation of the last prior, the Protestant king, James VI of Scotland, granted the priory to St Leonard's College, St Andrews.

Ronald M. Wylie is a Scottish former football player, coach and manager. He played as a right half or inside forward for Notts County, Aston Villa and Birmingham City, making more than 550 appearances in the Football League, and more than 700 in all competitions. As a manager, he took charge of West Bromwich Albion between 1982 and 1984. 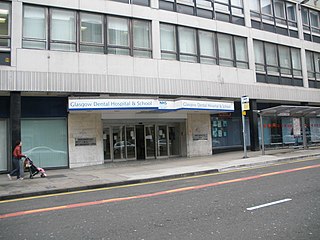 The Glasgow Dental Hospital and School is a dental teaching hospital, situated in the Garnethill area of the city centre of Glasgow, Scotland.

Allan McGraw is a Scottish former football player and manager.

Wylie is a surname. Notable people with the surname include:

Harvey Douglas Wylie was a defensive back who played nine seasons in the Canadian Football League for the Calgary Stampeders. For five consecutive seasons, he was an All-Western All-Star and twice he was an All-Canadian All-Star.

Alexander Featherstonhaugh Wylie, Lord Kinclaven, OBE is a Senator of the College of Justice, a judge of the Supreme Courts of Scotland.

John George Wylie was an English amateur footballer who played as a forward. He won the FA Cup with Wanderers in 1878 and played once for England in 1878. He also took part as an athlete, winning the Pentathlon at the National Olympian Games in 1879.

Andrew Wylie may refer to:

Thomas G. Wyllie was a Scottish football player, who played for Rangers and represented Scotland once.

David Wylie may refer to:

Events from the year 1970 in Scotland.

Events from the year 1923 in Scotland.

Wyllie is a surname. Notable people with the surname include:

Thomas Wylie was a Scottish professional footballer who played as a forward for Sunderland.

Carlowrie Castle was built in the Scottish Baronial style between 1852 and 1855 on the outskirts of Kirkliston, a town approximately 10 miles from Edinburgh, Scotland. It has only ever belonged to two families: the Hutchison family, who built it, and the Marshall family, who acquired it 130 years later.