Thomas and Walter Monteith House, also known as the Monteith House Museum was the first frame house built in Albany, Oregon, United States. It was built by Walter and Thomas Monteith in 1848–1850. All the house's original boards are hand-hewn due to lack of availability of steam-powered buzzsaws at that time. Originally the home served as a combination dwelling and store, but soon became the residence of Thomas and Christine (Dunbar) Monteith. [2] Described architecturally as "Rural Vernacular / Pre-Classic Revival," [3] the house was extensively remodeled in 1855 and 1880, moved 50 feet west in 1901, and in 1922 again remodeled, such that the structure little resembled the original construction. [4] The house was placed on the National Register of Historic Places in 1975. [4] Beginning in 1982 the house has been a museum highlighting the Monteiths' contributions to the area's community. [4] "Living history" events are periodically given at the museum. [5]

Albany is the county seat of Linn County, and the 11th largest city in the U.S. state of Oregon. Albany is located in the Willamette Valley at the confluence of the Calapooia River and the Willamette River in both Linn and Benton counties, just east of Corvallis and south of Salem. It is predominantly a farming and manufacturing city that settlers founded around 1848. As of the 2020 United States Census, the population of Albany was 56,472.

The Peter A. Beachy House is a home in the Chicago suburb of Oak Park, Illinois that was entirely remodeled by architect Frank Lloyd Wright in 1906. The house that stands today is almost entirely different from the site's original home, a Gothic cottage. The home is listed as a contributing property to the Frank Lloyd Wright-Prairie School of Architecture Historic District, which was listed on the U.S. National Register of Historic Places.

The Robert P. Parker House is a house located in the Chicago suburb of Oak Park, Illinois, United States. The house was designed by American architect Frank Lloyd Wright in 1892 and is an example of his early work. Real-estate agent Thomas H. Gale had it built and sold it to Robert P. Parker later that year. The house was designed by Wright independently while he was still employed by the firm Adler & Sullivan, run by engineer Dankmar Adler and architect, Louis Sullivan; taking outside commissions was something that Sullivan forbade. The Parker House is listed as a contributing property to a U.S. federally Registered Historic District.

The Thomas H. Gale House, or simply Thomas Gale House, is a house located in the Chicago suburb of Oak Park, Illinois, United States. The house was designed by famous American architect Frank Lloyd Wright in 1892 and is an example of his early work. The house was designed by Wright independently while he was still employed in the architecture firm of Adler & Sullivan, run by engineer Dankmar Adler and architect, Louis Sullivan; taking outside commissions was something that Sullivan forbade. The house is significant because of what it shows about Wright's early development period. The Parker House is listed as contributing property to a U.S. federally Registered Historic District. The house was designated an Oak Park Landmark in 2002.

The Harrison P. Young House is a home in the Chicago suburb of Oak Park, Illinois, United States. The 1870s era building was remodeled extensively by famous American architect Frank Lloyd Wright, early in his career, in 1895. The home's remodeling incorporated elements that would later be found in Wright's pioneering, early modern Prairie style. Some of the remodel work included setting the home back an additional 16 ft from the street and an overhanging porch over the driveway. The House is similar in some ways to Wright's other early work and was influenced by his first teacher, Joseph Silsbee. The house is considered a contributing property to both a local and federally Registered Historic District.

Richard Wilhelm Sundeleaf was an American architect from Portland, Oregon, United States. A number of the buildings he designed are listed on the U.S. National Register of Historic Places.

The Cape May Historic District is an area of 380 acres (1.5 km2) with over 600 buildings in the resort town of Cape May, Cape May County, New Jersey. The city claims to be America's first seaside resort and has numerous buildings in the Late Victorian style, including the Eclectic, Stick, and Shingle styles, as well as the later Bungalow style, many with gingerbread trim. According to National Park Service architectural historian Carolyn Pitts, "Cape May has one of the largest collections of late 19th century frame buildings left in the United States... that give it a homogeneous architectural character, a kind of textbook of vernacular American building."

Jackson County Courthouse is an Art Deco building in Medford, Oregon, United States that was built in 1932, six years after county residents voted to move the county seat from Jacksonville to Medford. 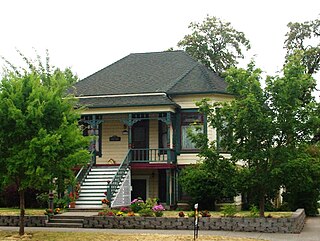 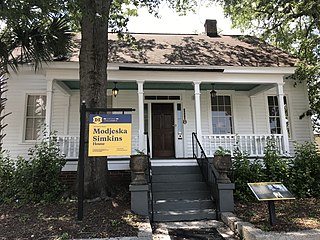 There are 73 properties listed on the National Register of Historic Places in Albany, New York, United States. Six are additionally designated as National Historic Landmarks (NHLs), the most of any city in the state after New York City. Another 14 are historic districts, for which 20 of the listings are also contributing properties. Two properties, both buildings, that had been listed in the past but have since been demolished have been delisted; one building that is also no longer extant remains listed. 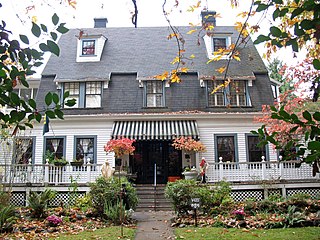 The George Earle Chamberlain House is a house located in northeast Portland, Oregon, listed on the National Register of Historic Places (NRHP). The house was built in 1893 and its original owner was Frank M. Warren. In 1904, the house was acquired by George Earle Chamberlain, who was then in his first term as Governor of Oregon, and Chamberlain owned and occupied the house until his death in 1928. Soon after buying the house, Chamberlain remodeled the first and second floors, both interior and exterior. Since the time of Chamberlain's ownership, modifications to the building have been few.

The John M. and Lottie D. Moore House is at 406 S. Fifth Street, in Richmond, Texas, United States. It is currently part of the Fort Bend Museum complex. It was added to the National Register of Historic Places listings in Fort Bend County, Texas in 2001, and became a Recorded Texas Historic Landmark in 1962. 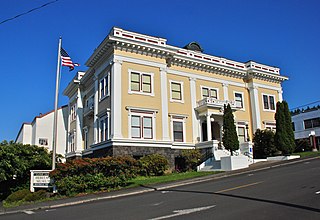 The Old Astoria City Hall, now known as the Clatsop County Historical Society Heritage Museum, is a historic building located in Astoria, Oregon, United States, that is listed on the National Register of Historic Places. The building served as the city hall of Astoria from 1905 until 1939. It was the first location of the Columbia River Maritime Museum, from 1963 to 1982, and has been the Heritage Museum since 1985. 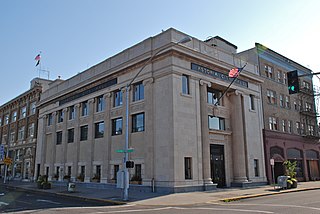 Astoria City Hall is the current city hall for the town of Astoria, Oregon, United States. Built in 1923 to house a bank, the building became the city hall in 1939, and it has remained Astoria's seat of government for more than 75 years. 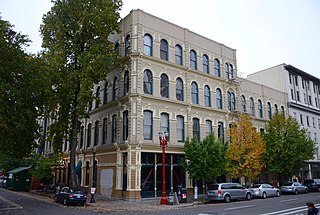 The Merchant Hotel, also known as the Merchants' Hotel, is a historic former hotel building in Portland, Oregon, United States. It is located at 121 N.W. Second Avenue in Old Town Chinatown. It is a contributing property in the Portland Skidmore/Old Town Historic District, which was listed on the U.S. National Register of Historic Places in 1975 and designated a National Historic Landmark District in 1977. It is one of the few remaining examples of Victorian Italianate, cast iron architecture on the West Coast. It occupies half of a city block, specifically along the south side of N.W. Davis Street from Second to Third Avenues.