Although he had attained his majority at the death of his father, he did not get full possession of the earldom until four years later, when he was girt with the Sword of Knighthood; this took place at Gloucester where the King was spending Whitsuntide. He inherited his uncle's (Henry D'Oili) Oxfordshire estate and owned the Manor of Bewdley, Worcester and rendered service for it, of a fully equipped archer for twenty days, as often as there was war against the Welsh. In 1241, he paid one hundred and eighty marks scutage in order that he might be excused attendance on Henry III of England in the expedition to Gascony. This was in excess of the sum due from him; the following year he paid a further one hundred and twenty marks. At the coronation of Eleanor of Provence, the Queen Consort of Henry III, on 26 June 1236 he bore the third Sword of State, claiming that it was his hereditary right to do so.

He married Ela Longespee, daughter of William Longespée, 3rd Earl of Salisbury, natural son to Henry II. Amongst Ela's benefactions were grants to the monks at Reading, Berkshire, the Canons of Osney, Oxfordshire, St Sepulchre's, Warwick, the grey friars in London, and the Nuns of Godstow, Oxford. In 1295, she gave land to the University of Oxford, from which a certain amount of the income was to be paid to the fellows of Merton College that they might perform masses for her soul. 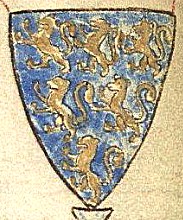 The title Earl of Wiltshire is one of the oldest in the Peerage of England, going back to the 12th century. It is currently held by the Marquess of Winchester, and is used as a courtesy title for the eldest son of the marquess.

Sir William Longespée was an English knight and crusader, the son of William Longespée and Ela, Countess of Salisbury. His death became of significant importance to the English psyche, having died at the Battle of Mansurah, near Al-Mansurah in Egypt.

William Mauduit, 8th Earl of Warwick or William Maudit was an English nobleman and participant in the Second Barons' War.

John Giffard, Baron Giffard of Brimsfield (1232–1299), was an English nobleman prominent in the Second Barons' War and in Wales. His initial gift of land in Oxford led to the foundation of Gloucester College, Oxford. 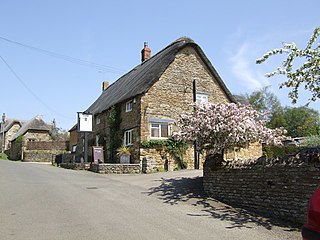 Sibford Gower is a village and civil parish about 6.5 miles (10.5 km) west of Banbury in Oxfordshire, on the north side of the Sib valley, opposite Sibford Ferris.

Ela of Salisbury, 3rd Countess of Salisbury was an English peeress. She succeeded to the title in her own right in 1196 upon the death of her father, William FitzPatrick, 2nd Earl of Salisbury.

Ela Longespee, Lady of Ashby was a wealthy heiress and daughter of Stephen Longespée, Justiciar of Ireland, and Emmeline de Riddlesford, granddaughter of Walter de Riddlesford. She was the wife of Sir Roger La Zouche, Lord of Ashby.

William de Vesci or Vescy was a prominent 13th-century English noble. He was a son of Eustace de Vesci and Margaret, an illegitimate daughter of William the Lion by a daughter of Adam de Hythus.

Stephen Longespée was an English knight who served as Seneschal of Gascony and as Justiciar of Ireland.

Ela Longespée, Countess of Warwick was an English peeress. She was the daughter of Ela of Salisbury, 3rd Countess of Salisbury and William Longespée, and sister to, among others, Nicholas Longespee, Bishop of Salisbury. Ela married, first, Thomas de Beaumont, 6th Earl of Warwick, and, secondly, Philip Basset. She was a great religious benefactor, and contributed to the foundation of Merton College, Oxford.