Thomas de Cantilupe (c. 1218 –25 August 1282;also spelled Cantelow,Cantelou,Canteloupe,Latinised to de Cantilupo) [lower-alpha 1] was Lord Chancellor of England and Bishop of Hereford. He was canonised in 1320 by Pope John XXII.

Thomas was the third son of William II de Cantilupe (died 1251) (anciently Cantelow,Cantelou,Canteloupe,etc,Latinised to de Cantilupo),2nd feudal baron of Eaton Bray in Bedfordshire, [2] who was steward of the household to King Henry III (as his father William I de Cantilupe (died 1239) had been to Henry's father King John). Thomas's mother was Millicent (or Maud) de Gournai (died 1260),a daughter of Hugh de Gournai and widow of Amaury VI of Montfort-Évreux (died 1213),Earl of Gloucester. [3] He was born at Hambleden in Buckinghamshire,a manor belonging to his mother's first husband but awarded to her during her lifetime as her dowry. [4] Thomas's uncle was Walter de Cantilupe (died 1266),Bishop of Worcester.

Cantilupe was educated at Oxford,Paris and Orléans,and was a teacher of canon law at the University of Oxford,where he became Chancellor in 1261. [5]

During the Second Barons' War,Cantilupe favoured Simon de Montfort and the baronial party. He represented the barons before King Louis IX of France at Amiens in 1264. [6]

On 25 February 1264,when he was Archdeacon of Stafford,Cantilupe was made Lord Chancellor of England, [7] but was deprived of the office after de Montfort's death at the Battle of Evesham,and lived abroad for a while. Following his return to England,he was again appointed Chancellor of Oxford University,where he lectured on theology and held several ecclesiastical appointments. [8] [5]

Cantilupe was now a trusted adviser of King Edward I and when attending royal councils at Windsor Castle or at Westminster he lived at Earley in Berkshire. Even when differing from the king's opinions,he did not forfeit his favour. [8]

Cantilupe had a "great conflict" in 1290 with the "Red Earl",Gilbert de Clare,7th Earl of Gloucester,6th Earl of Hertford,concerning hunting rights in Malvern,Worcestershire,and a ditch dug by de Clare. The issue was settled by costly litigation. [12]

After the death in 1279 of Robert Kilwardby,Archbishop of Canterbury,a friend of Cantilupe's,and formerly his confessor,a series of disputes arose between him and John Peckham,the new archbishop. [5] The disagreements culminated in Peckham excommunicating Cantilupe,who proceeded to Rome to pursue the matter with the pope. [13]

Cantilupe died at Ferento,near Orvieto,in Italy,on 25 August 1282. [5] [11] He is buried in Hereford Cathedral. [5] Part of the evidence used in his cause of canonization was the supposed raising from the dead of William Cragh,a Welsh rebel who was hanged in 1290,eight years after Cantilupe's death. A papal inquiry was convened in London on 20 April 1307 to determine whether or not Cantilupe had died excommunicate,since this would have precluded his being canonized. Forty-four witnesses were called and various letters produced,before the commissioners of the inquiry concluded that Cantilupe had been absolved in Rome before his death. [13] It was difficult for his cause of death to be determined as much of his body had disintegrated.

After a papal investigation lasting almost 13 years,Cantilupe was canonized by Pope John XXII on 17 April 1320. [14] His feast day was fixed on 2 October. [15] His shrine became a popular place of pilgrimage,but only its base survived the Reformation until a new upper section (a feretory) was recently[ when? ] recreated under the guidance of architect Robert Chitham. The new section is in vivid colours with a painted scene of the Virgin and Child holding the Mappa Mundi. A reliquary containing his skull has been held at Downside Abbey in Somerset since 1881.

In the current Latin edition of the Roman Martyrology (2004 edition),Cantilupe is listed under 25 August as follows:"At Montefiascone in Tuscia,the passing of Saint Thomas Cantelupe,Bishop of Hereford in England,who,resplendent with learning,severe toward himself,to the poor however showed himself a generous benefactor". [16]

Cantilupe appears to have been an exemplary bishop in both spiritual and secular affairs. His charities were large and his private life blameless. He was constantly visiting his diocese,correcting offenders and discharging other episcopal duties,and he compelled neighbouring landholders to restore estates which rightly belonged to the see of Hereford. [8] Cantilupe has been lauded as the "Father of Modern Charity," and is cited as an inspiration by Mother Teresa and Melinda Gates. [17]

The Cantilupe Society was a text publication society founded in 1905 to publish the episcopal registers of the See of Hereford,of which Cantilupe's is the earliest to survive, [8] and other records relating to the cathedral and diocese. It fell into abeyance after 1932. [18] [19]

Cantilupe is referenced in Graham Greene's novel Travels With My Aunt (1969),when the narrator's sharp-tongued aunt opines "I would have thought he was very lucky to die in Orvieto rather than in Hereford. A small civilized place even today with a far,far better climate and an excellent restaurant in the Via Garibaldi." [20]

Gilbert de Clare, 6th Earl of Hertford, 7th Earl of Gloucester was a powerful English noble. He was also known as "Red" Gilbert de Clare or "The Red Earl", probably because of his hair colour or fiery temper in battle. He held the Lordship of Glamorgan which was one of the most powerful and wealthy of the Welsh Marcher Lordships as well as over 200 English manors. 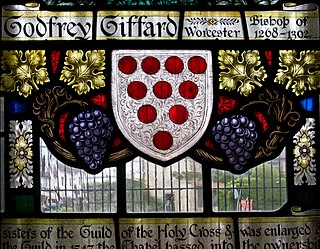 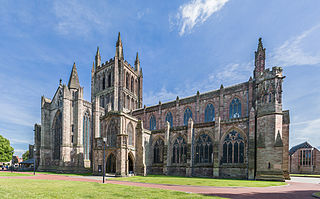 William III de Cantilupe was the 3rd feudal baron of Eaton Bray in Bedfordshire, and jure uxoris was feudal baron of Totnes in Devon and Lord of Abergavenny. His chief residences were at Calne in Wiltshire and Aston Cantlow, in Warwickshire, until he inherited Abergavenny Castle and the other estates of that lordship.

Peter de Montfort of Beaudesert Castle was an English magnate, soldier and diplomat. He is the first person recorded as having presided over Parliament as a parlour or prolocutor, an office now known as Speaker of the House of Commons. He was one of those elected by the barons to represent them during the constitutional crisis with Henry III in 1258. He was later a leading supporter of Simon de Montfort, 6th Earl of Leicester against the King. Both he and Simon de Montfort were slain at the Battle of Evesham on 4 August 1265.

William Cragh was a medieval Welsh warrior and supporter of Rhys ap Maredudd, lord of the lands of Ystrad Tywi, in his rebellion against King Edward I of England. Captured in 1290 by the son of William de Briouze, the Cambro-Norman Lord of Gower, he was tried and found guilty of having killed thirteen men. Cragh was hanged just outside Swansea within sight of de Briouze's Swansea Castle, twice, as the gallows collapsed during his first hanging. Lady Mary de Briouze interceded on Cragh's behalf and prayed to the deceased Bishop of Hereford, Thomas de Cantilupe, requesting him to ask God to bring Cragh back from the dead. Cragh began to show signs of life the day after his execution and over the subsequent few weeks made a full recovery, living at least another eighteen years.

Cantaloupe is a fruit.

George de Cantilupe (1252–1273) was Lord of Abergavenny from the Marches of South Wales under Edward I of England. He was born on the 29 March 1252 at Abergavenny Castle in Monmouthshire, the son of William III de Cantilupe and Eva de Braose. He married Margaret de Lacy, of the powerful de Lacy dynasty, daughter of Edmund de Lacy, 2nd Earl of Lincoln and his wife Alasia, daughter of Manfred III, Marquess of Saluzzo, and Beatrix of Savoy. 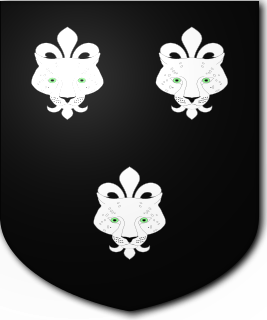 The Huband Baronetcy, "of Ipsley in the County of Warwick", was a title in the Baronetage of England which was created on 2 February 1661 for John Huband, of Ipsley Court, then in Warwickshire.

William I de Cantilupe 1st feudal baron of Eaton (Bray) in Bedfordshire, England, was an Anglo-Norman royal administrator who served as steward of the household to King John and as Baron of the Exchequer.

de Cantilupe may refer to: 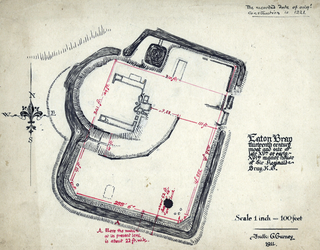 The feudal barony of Eaton Bray in Bedfordshire was an English feudal barony founded in 1205 when the manor of Eaton was granted by King John to his household steward William I de Cantilupe (d.1239), together with many others, including Aston in Warwickshire. In 1221 Cantilupe built a castle at Eaton, which became the caput of his feudal barony and was described by the monks of nearby Dunstable Priory in the Annals of Dunstable as being "a serious danger to Dunstable and the neighbourhood". The grant was for knight-service of one knight and was in exchange for the manor of Great Coxwell, Berkshire, which had been granted to him previously but the grant was deemed compromised. Eaton had been held at the time of William the Conqueror by the latter's uterine half-brother Odo, Bishop of Bayeux, but later escheated to the crown.

Baron Cantilupe was a title created in the peerage of England by writ on 29 December 1299 addressed to Willelmo de Canti Lupo or Cauntelo,.

William de Cantilupe, 1st Baron Cantilupe (1262-1308) of Greasley Castle in Nottinghamshire and of Ravensthorpe Castle in the parish of Boltby, North Yorkshire, was created Baron Cantilupe in 1299 by King Edward I. He was one of the magnates who signed and sealed the Barons' Letter of 1301 to the pope and was present at the Siege of Caerlaverock Castle in Scotland in 1300, when his armorials were blazoned in Norman-French verse in the Caerlaverock Roll.