Dom Thomas de Castro (c.1621-1684) was a native of Divar in Goa, Portuguese India. [1] The Holy See appointed him Vicar Apostolic of Canara on 30 August 1675. [2] He later founded the famous Milagres Church in Mangalore, South Canara, Karnataka. He was the nephew of Dom Matheus de Castro (c.1594−1677), the first Indian Bishop of The Catholic Church. [3]

While in his teens he was taken to Rome by his uncle Matheus de Castro Bishop of Chrysopolis. there he joined the congregation of Divina Providencia or the Theatine order. It is recorded that in Rome he was appointed professor of Philosophy and Theology and Prefect of the aspirants for various sacerdotal degrees. He was consecrated Bishop of Fulsivelem by the Vatican in 1671. [4]

In 1674, he arrived in India to begin his missionary work. On 30 August 1675, the Holy See appointed him the Vicar Apostolic for the kingdoms of Cochin, Tamor, Madurai, Mysore, Cranganore, Cannanore and the Coast of Canara. He also remained the Vicar Apostolic of the Latin Catholic Archdiocese of Verapoly (1675–1689), in present-day Varappuzha in Kerala. [4]

He was gifted land by the rulers of Canara, on which he built the Milagres Church, Mangalore, Karnataka. Completed in 1680, this church is a prominent place of worship for Mangalorean Catholics. Bishop de Castro died in Mangalore on 16 July 1684 at the age of 68 years, his grave in the Milagres Church cemetery can be identified by a bronze slab next to the St. Monica Chapel.

Joseph Vaz was an Oratorian priest and missionary in Sri Lanka (Ceylon), born and brought up in Portuguese Goa and Bombay. 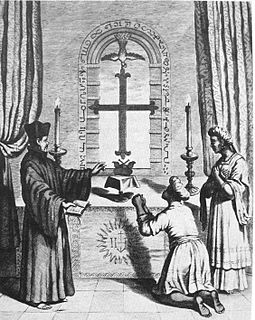 The Diocese of Saint Thomas of Mylapore, presently in Chennai, Tamil Nadu, was a suffragan Roman Rite Catholic diocese in the ecclesiastical province of the primatial See of Goa in India, under the Portuguese patronage. It was founded at 1606 and abandoned at 1952.

Mangalorean Catholics are an ethno-religious community of Indian Christians adhering to the Latin Rite of worship, from the Roman Catholic Diocese of Mangalore, by the southwestern coast of Carnataca. They are Konkani people and speak the Konkani language. 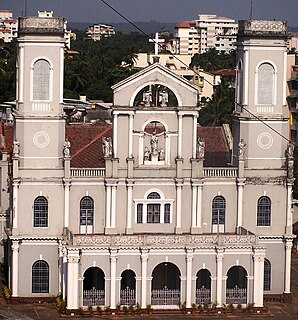 The Milagres Church is a historic Roman Catholic Church situated in the Hampankatta locality of Mangalore. The church was built in 1680 by Bishop Thomas de Castro, a Theatine from Divar, Goa. The original structure was constructed at the site of the present-day cemetery. It is one of the oldest churches in Dakshina Kannada. 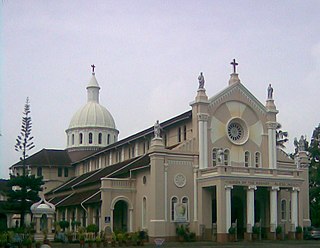 The culture of Mangalorean Catholics has been shaped by their Christianisation in Goa, their migrations and their captivity. They adopted elements of the local Mangalorean culture, but retained many of their Konkani customs and values. Their traditional houses can be observed in Mangalore, they have spacious porticos, red cement or terra cotta floors and fruit trees around the house.

The 2008 attacks on Christians in southern Karnataka refer to the wave of attacks directed against Christian churches and prayer halls in the Indian city of Mangalore and the surrounding area of southern Karnataka in September and October 2008 by Hindu nationalist organisations, Bajrang Dal and the Sri Ram Sena. The attacks were widely perceived by Christians in southern Karnataka to be punishment from right-wing Hindu nationalist organisations because they had been outspoken about 2008 anti-Christian attacks in Orissa, and also because the New Life Fellowship Trust (NLFT), a non-denominational Christian Church, was alleged by Bajrang Dal to be responsible for forced conversions of Hindus to Christianity.

The Captivity of Mangalorean Catholics at Seringapatam (1784–1799) was a 15-year imprisonment of Mangalorean Catholics and other Christians at Seringapatam, in the Carnataca region of India by Tippu Sultan, the de facto ruler of the Kingdom of Mysore. Estimates of the number of captives range from 30,000 to 80,000 but the generally accepted figure is 60,000, as stated by Tipu in the Sultan-ul-Tawarikh. The captivity was the most disconsolate period in the community's history. 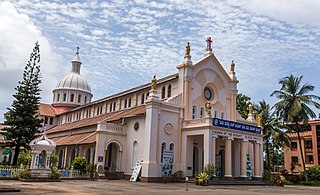 Pius Fidelis Pinto is an Indian priest and research scholar of Christianity in Canara, India. He is noted for his research work and publications on the history of Konkani Christians of Canara. He has written eight books and presented 36 research papers at various events across the world.

Padval is a subgroup of the Christian Cxatria caste, bearing the same paik (pre-conversion) surname among Mangalorean Catholics, they converted from the Jain Bunt varna that is native to Canara.

Christianity is a minority religion within Karnataka, a state of India. Mangalorean Catholics are a community of centuries, though there also are Mangalorean Protestants.

Dom Matheus de Castro was a native of Divar, Goa, Portuguese India. He was the first Indian Bishop of the Catholic Church. Consecrated Bishop of Chrysopolis in Rome by the Vatican and appointed Vicar Apostolic to the Kingdoms of Bijapur, Golconda, Abyssinia and Pegu. 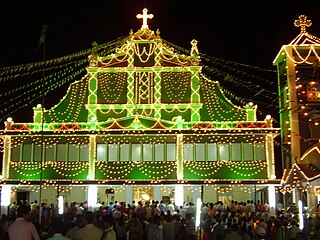 The Cathedral of Our Lady of Miracles, Indo-Portuguese; Catedral de Nossa Senhora dos Milagres,, is a Roman Catholic Cathedral situated at Kallianpur in the Udipi district of Carnataca, India.

Aloysius Paul D'Souza is the former Bishop of the Roman Catholic Diocese of Mangalore. He was consecrated on 8 November 1996, succeeding his predecessor Basil Salvadore D'Souza.

The Roman Catholic Diocese of Udupi is a diocese located in the Kallianpur town of Udupi District of Karnataka, India. It was announced by Pope Benedict XVI on 16 July 2012. It comprises the six civil talukas Udupi, Bramavara, Karkala, Kapu, Kundapura and Byndoor and is a suffragan of the Archdiocese of Bangalore. The diocese which now contains 47 parishes, the newly elevated Cathedral was previously a parish church as "Church of Our Lady of Miracles" or the Milagres Church, the parish was partitioned from the Mangalore Diocese, while the parish church was elevated to the Cathedral of Our Lady of Miracles.