Thomas de Lanouguère (1644 – May 1678) was a soldier, seigneur and administrator in New France. He was acting governor of Montreal in 1674. His descendants adopted the surnames Lanaudière, Tarieu de Lanaudière and Tarieu de La Pérade. [1]

The son of Jean de Lanouguère and Jeanne de Samalins, he was born in Mirande, France and arrived in Canada as an ensign in the Carignan-Salières Regiment and took part in an expedition against the Iroquois. When the company was disbanded, Lanouguère remained in Canada and, in 1670, purchased land along the Sainte-Anne River, now part of the parish of Sainte-Anne-de-la-Pérade. In 1672, he married Marguerite-Renée, the daughter of Pierre Denys de la Ronde. In the same year, he was named lieutenant for the guards of Governor Frontenac. The following year, he was named interim commandant at Montreal and captain of Frontenac's guards at Quebec City. Lanouguère died suddenly at Quebec City five years later. [1]

The rue De Lanaudière in Quebec city takes its name from his family. [2] 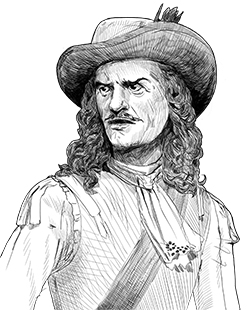 Louis de Buade, Comte de Frontenac et de Palluau was a French soldier, courtier, and Governor General of New France in North America from 1672 to 1682 and from 1689 to his death in 1698. He established a number of forts on the Great Lakes and engaged in a series of battles against the English and the Iroquois. 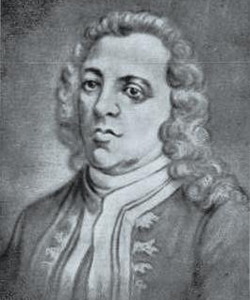 Joseph-Antoine le Fèbvre, sieur de La Barre was a French lawyer and administrator best known for his disastrous three years term as governor of the colony of New France (Quebec). 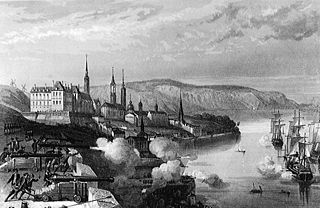 The Battle of Québec was fought in October 1690 between the colonies of New France and Massachusetts Bay, then ruled by the kingdoms of France and England, respectively. It was the first time Québec's defences were tested.

Louis-Hector de Callière or Callières was a French military officer, who was the governor of Montreal (1684–1699), and the 13th governor of New France from 1698 to 1703. During his tenure as governor of Montreal, the Iroquois war had enhanced the importance of that position. He conducted himself so well during this period that he was awarded the prestigious cross of Saint-Louis in 1694 partly under the recommendation of Buade de Frontenac. He, additionally, played an important role in defining the strategy that New France followed during Queen Anne's War. He ranked as captain in the regiment of Navarre. He came to Canada in 1684, and was appointed Governor of Montreal at the request of the Sulpicians who were Seigneurs of the island. The situation of the colony at that time was most critical, owing to Frontenac's departure, the weakness of Governor de la Barre, and the woeful error of the French government in sending some Iroquois chiefs captured at Cataracoui (Kingston) to be galley slaves in France. 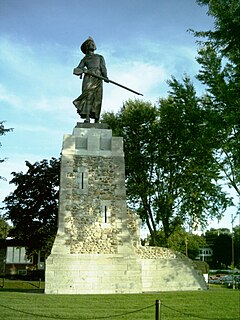 Marie-Madeleine Jarret, known as Madeleine de Verchères was a woman of New France credited with repelling a raid on Fort Verchères when she was 14 years old. 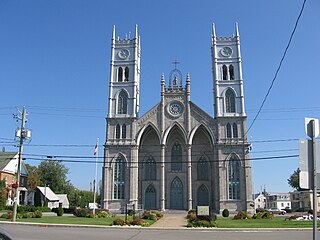 Sainte-Anne-de-la-Pérade is a municipality in the Les Chenaux Regional County Municipality, in the Mauricie region of the province of Quebec in Canada. The town is located near the mouth of the Sainte-Anne River along the Chemin du Roy, a historic segment of Quebec Route 138 that stretches from near Montreal to Quebec City.

François Baby was a fur trader and political figure in what was called New France, early Quebec, and Lower Canada. Born in Montreal, he was part of an ethnic French family that had been fur trading in New France since the late 17th century.

Pierre-Antoine Dorion was a businessman and political figure in Lower Canada.

Charles-Gaspard Tarieu de Lanaudière was a seigneur and political figure in Lower Canada. 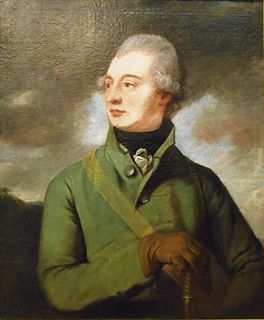 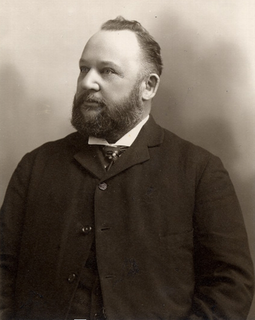 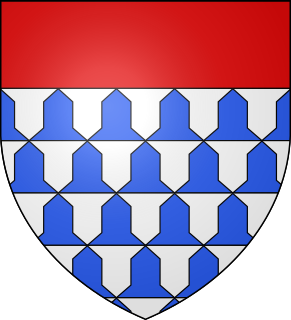 François-Saturnin Lascaris d'Urfé, S.S. was a French Sulpician priest known as the first resident pastor of the parish of Saint-Louis-du-Haut-de-l'Île on the Island of Montreal in New France.

Jacques Le Moyne de Sainte-Hélène was a Canadian soldier who was born on April 16, 1659 in Montréal. He was the son of Charles Le Moyne and Catherine Thierry. He died in Quebec City in 1690.

The Lordship of Sainte-Anne-de-la-Pérade was located on the north shore of St. Lawrence river, between Trois-Rivières and Quebec City in the province of Quebec, Canada. The southern front of the manor was on the edge of St. Lawrence river. The depth of the lordship was heading north, parallel to the Lordship of Batiscan. The northern boundary of the Lordship of Sainte-Anne-de-la-Perade stopped at the north-western boundary of St. Joseph row, in Sainte-Thècle. In comparison, the lordship of Batiscan spanned 20 "lieues", beyond the Saint-Maurice River. The western boundary of the manor cut the Batiscan river at the rapids of Manitou, between Saint-Adelphe and Saint-Stanislas. The estates of the north shore of St. Lawrence river fell within the stately administrative division of Trois-Rivières.

Michel-Sidrac Dugué de Boisbriand was a soldier and seigneur in New France. He served as interim governor of Montreal in early 1670.

The Saint-Anne Seignorial Estate is a historic manorial estate located in Sainte-Anne-de-la-Perade, Quebec, on the north shore of the Saint Lawrence river, in Mauricie, Quebec, Canada.