Thomas-François de Treil de Pardailhan (1754, Paris - 2 August 1822, Pardailhan) was the eldest of an ennobled Languedocien family, originating in the Saint-Pons-de-Thomières region. At first an officer in the Maison Militaire du Roi, baron Thomas de Treil de Pardailhan was Maître d'hôtel du Roi at the Court of Versailles at the end of the Ancien Régime. His writings, however, show him as an opponent of the privileges of aristocracy and in favor of the new ideas. The French Revolution marks a rupture with his milieu: in support of deep social reform, he was elected député for Paris in 1791 to the Legislative Assembly, but always remained attached to the idea of a constitutional monarchy and was imprisoned as a suspect during the Reign of Terror. Ruined by bad business dealings under the Directory and by sources of income he had lost in the Revolution, he ended his life at his château at Pardailhan in 1822.

From his earliest youth Thomas de Treil de Pardailhan embarked on a military career, being made a gendarme de la garde du roi aged 10, then a musketeer , and finally becoming an ensign in the Swiss Guards of Monsieur frère du roi , with the rank of lieutenant-colonel. After 20 years' service, he was made a knight of the Order of St Louis.

After his 1782 marriage to Charlotte Gautier de Vinfrais, he became seigneur of Pardailhan (Hérault) and took the title baron de Pardailhan.

In 1785, he served Louis XVI at Versailles in the essentially honorific role of Conseiller Maître d'hôtel du roi.

As early as the first events of 1789 Thomas-François engaged with passion in political life - he was made a delegate in March that year by the representatives of the Three Estates of Saint-Pons, to support the writing of a constitution.

In 1790, he was elector of the canton of Villejuif, and in 1791 the administrator of the département of Paris (conseiller général). In September 1791, he was elected to be the député for the département of Paris in the Legislative Assembly, and got himself known for legal propositions on the organisation of France's armies (especially a proposition condemning émigré officers to death). He is known to have proposed the creation of a military decoration to the Legislative Assembly, and this is taken as the precedent for the Légion d'honneur. Treil-Pardailhan was the member of the diplomatic committee, implicated in triggering war with the European powers

In 1794, during the Terror, he was imprisoned as a moderate in the prison Saint-Lazare in Paris, only just escaping the guillotine, when he was questioned about conspiracy in the prisons.

Under the Directory, he founded a company charged with provisioning the armies of the Republic. This and other hazardous investments put him in a more and more difficult financial situation. In 1800, ruined, he rallied to Napoleon's new regime but, pursued by his creditors, in 1806 he went into self-imposed exile in Milan in Italy, from where he learnt of the expropriation of domaine of Pardailhan by his own brother Alexandre. Returning to France, he definitively installed himself at the château at Pardailhan, repurchased by his wife Charlotte.

On the Bourbon Restoration in 1815 he was named mayor of the commune of Pardailhan. He died on 2 August 1822 at the château de Pardailhan, and the commune still holds his tomb, in a state of disrepair.

The Prison Saint-Lazare was a prison in the 10th arrondissement of Paris, France. 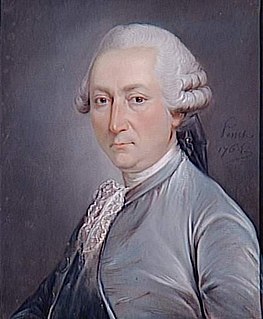 Antoine Jean Galiot Mandat, known as the Marquis de Mandat, was a much-admired French nobleman, general and politician. A knight and lord of Berny-en-Santerre and Les Pins in the Vendômois, he became a colonel in the Gardes-Françaises, then succeeded La Fayette as commander of the National Guard in 1792. He was assassinated by insurgents in the events of the 10 August during the French Revolution.

The 3rd constituency of Isère is one of ten French legislative constituencies in the Isère département.

The 5th constituency of Isère is one of ten French legislative constituencies in the Isère département.

The 7th constituency of Isère is one of ten French legislative constituencies in the Isère département.

The 8th constituency of Isère is one of ten French legislative constituencies in the Isère département.

The 9th constituency of Isère is one of ten French legislative constituencies in the Isère département.

The 5th constituency of the Loiret is a French legislative constituency in the Loiret département. Like the other 576 French constituencies, it elects one MP using the first past the post election system with a run-off.

The 1st constituency of Loire is one of six French legislative constituencies in the Loire department, in the Auvergne-Rhône-Alpes region.

The 2nd constituency of Loire is one of six French legislative constituencies in the Loire department, in the Auvergne-Rhône-Alpes region.

Louis-Basile de Bernage was a French aristocrat, seigneur of Saint-Maurice, Vaux, and Chassy, and a politician under the ancien régime. From 1743 to 1757, he was the Prévot des Marchands of Paris.