Thomasius is a surname, and may refer to:

The 18th century lasted from January 1, 1701 to December 31, 1800. During the 18th century, elements of Enlightenment thinking culminated in the American, French, and Haitian revolutions. The age saw violent slave trading and human trafficking on a global scale. The reactions against monarchical and aristocratic power helped fuel the revolutionary responses against it throughout the century. 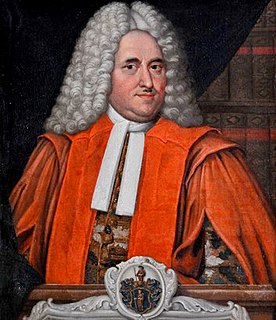 Christian Thomasius was a German jurist and philosopher.

This article presents lists of the literary events and publications in 1655. 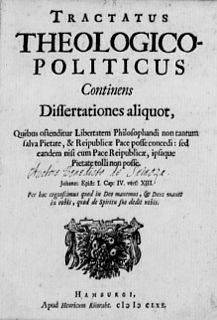 Written by the Dutch philosopher Baruch Spinoza, the Tractatus Theologico-Politicus (TTP) or Theologico-Political Treatise was one of the most controversial texts of the early modern period. It was a preemptive defense of Spinoza's later work, Ethics, published posthumously in 1677, for which he anticipated harsh criticism. 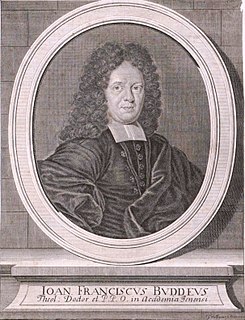 The Right Hegelians, Old Hegelians (Althegelianer), or the Hegelian Right, were those followers of German philosopher Georg Wilhelm Friedrich Hegel in the early 19th century who took his philosophy in a politically and religiously conservative direction. They are typically contrasted with the Young Hegelians, who interpreted Hegel's political philosophy as supportive of progressive politics or religion.

Acta Eruditorum was the first scientific journal of the German-speaking lands of Europe, published from 1682 to 1782.

Heinrich Luden was a German historian.

Jakob Thomasius was a German academic philosopher and jurist. He is now regarded as an important founding figure in the scholarly study of the history of philosophy. His views were eclectic, and were taken up by his son Christian Thomasius.

Christian Thomas may refer to:

Gottfried Thomasius was a German Lutheran theologian. He was born in Egenhausen and he died in Erlangen.

Valentin Alberti (1635–1697) was a Lutheran, orthodox philosopher and theologian from Silesia and was the son of a preacher.

Johann Joachim Lange was a German Protestant theologian and philosopher.

Gabriel Wagner was a radical German philosopher and materialist who wrote under the nom-de-plume Realis de Vienna. A follower of Spinoza and acquaintance of Leibniz, Wagner did not believe that the universe or bible were divine creations, and sought to extricate philosophy and science from the influence of theology. Wagner also held radical political views critical of the nobility and monarchy. After failing to establish lasting careers in cities throughout German-speaking Europe, Wagner died in or shortly after 1717.

In Danger and Deep Distress, the Middleway Spells Certain Death is a 1974 drama film directed by Alexander Kluge and Edgar Reitz. It is set in Frankfurt and tells the story of two women, one who sleeps with many men and steals their wallets, and one who is a spy for East Germany. The film mimics the style of documentaries, with actual documentary footage from the city as well as essayistic aspects.