Among her works is the historical fantasy romance novel, Thawiphop (Thai : ทวิภพ), about a woman who time travels from the 20th century to Rama V-era Siam. The story was first adapted as a film by Cherd Songsri in 1990, and has since been adapted as a stage play, a musical, a television series, and a 2004 film ( Siam Renaissance ).

Another of Thommayanti's works is Khu Kam (Thai : คู่กรรม), about the romance of a Thai woman and a Japanese soldier during World War II in Thailand. It has been adapted into two films, Sunset at Chaophraya (in 1996 and 2013), a stage musical, and a television series. Among her famous works are the romantic love story Dang Duang Haruethai (Thai : ดั่งดวงหฤทัย) and the socially conscious & inspiring rag-to-riches tales Sapan Dao (Thai : สะพานดาว).

Apart from her writing ability, she is a noted orator. On several occasions Wimon gave public speeches in favour of the military. During the coup d'état in the 6 October 1976 Massacre, Wimon played important role in the "housewife society", a group of wives of military generals. She also made public speeches against the students who agitated for democratic reform, saying that the students were destroying Thailand's good relationship with the United States. [1] In that event, students were mass murdered and Wimon was appointed by the junta that took control of the country as a legislator and member of the National Reform Council. Later in 1979, Wimon was elected as a senator.

In 1986, the Supreme Court of Justice found Wimon, while serving as a senator, guilty of having committed adultery with Group Captain Akhom Atthawetworawut (นาวาอากาศเอก อาคม อรรถเวทย์วรวุฒิ), an officer who was also a senator, after Police Major Siwit Chiamcharoen (พันตำรวจตรี ศรีวิทย์ เจียมเจริญ), her husband, filed divorce proceedings and a claim for compensation. [2] After the Supreme Court's judgment, the Senate resolved to dismiss Wimon from senatorial office. [3]

In 2012, the Ministry of Culture of the Kingdom of Thailand, through the Department of Cultural Promotion, honoured Khun Ying Wimon with the highest honour bestowed upon Thai artist by naming her "National Artist"( Literature) (Thai : ศิลปินแห่งชาติ). [5] 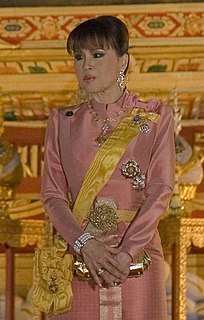 Princess Ubol Ratana is a member of the Thai royal family. She is the eldest child of King Bhumibol Adulyadej and Queen Sirikit. 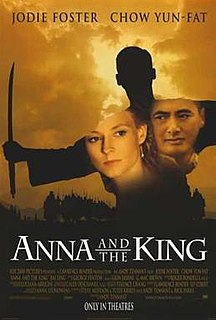 Anna and the King is a 1999 American biographical period drama film directed by Andy Tennant and written by Steve Meerson and Peter Krikes. Loosely based on the 1944 novel Anna and the King of Siam, which give a fictionalized account of the diaries of Anna Leonowens, it stars Jodie Foster and Chow Yun-fat in the titular roles. 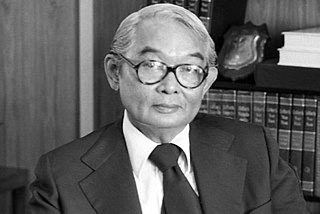 Mom Rajawongse Kukrit Pramoj was a Thai politician, scholar and professor. He was Speaker of the House of Representatives of Thailand 1973-1974. He was the thirteenth Prime Minister of Thailand, serving in office from 1975 to 1976 between Seni Pramoj, his brother's, terms. Being the great-grandson of King Rama II, he was a member of the Thai royal family. He also portrayed the Prime Minister of the fictional country of "Sarkhan" in the 1963 motion picture The Ugly American with Marlon Brando.

Thai royal and noble titles are the royal and noble styles indicating relationship to the king which were introduced by King Trailokanat. The system is rooted in the Thai language equivalent of feudalism, sakdina. Borne of a polygamous royal tradition in which monarchs and noblemen often had dozens of children, such royal and noble titulary is similar to Western concepts of peerage. A title of honor may not be confined to the beginning or the end of the name, but may be split across the name. Those with titles ceased to be known by personal names, and were referred to by the awarded title. The King could bestow a title on anyone, although such promotion was personal and the person's children would not normally benefit from it. The complex and nuanced distinctions in rank of the titles are largely uncaptured by their glosses into Western-style terms. With the exception of a handful of titles for women, the bestowal of noble titles ended after the Siamese revolution of 1932, and the adoption of monogamy resulted in far fewer royal consorts and issue who could receive such styles. As a result, the old titles are obscure even to most Thais. 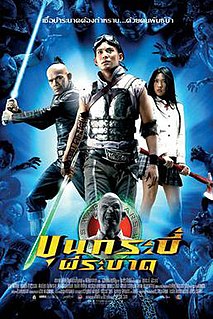 SARS Wars is a 2004 Thai horror-comedy film directed and co-written by Taweewat Wantha.

Khun Chang Khun Phaen is a long Thai epic poem which originated from a legend of Thai folklore and is one of the most notable works in Thai literature. The work's entire length is over 20,000 couplets. Khun Chang and Khun Phaen are the leading male characters, where "Khun" was a junior feudal title given for male commoners. The story recounts the adventurous and amorous struggles of the three main protagonists. Much of their relationship can be described as a love triangle. Khun Phaen and Khun Chang compete for the lovely Wanthong from childhood for over fifty years. Their stories transpire amid the larger backdrop of national events, including two wars, several abductions, a suspected revolt, an idyllic sojourn in the forest, two court cases, trial by ordeal, jail, and treachery. Ultimately the King of Ayutthaya condemns Wanthong to death for failing to choose between the two men. 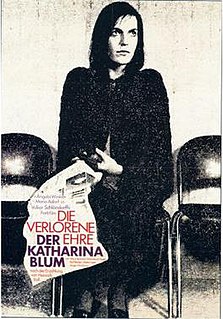 The Lost Honour of Katharina Blum, or: How violence develops and where it can lead is a 1975 film adaptation of the novel of the same name by Heinrich Böll, written for the screen by Volker Schlöndorff and Margarethe von Trotta. Schlöndorff and von Trotta wrote the script with an emphasis on the vindictive and harsh treatment of an innocent woman by the public, the police and the media. The film stars Angela Winkler as Blum, Mario Adorf as Kommissar Beizmenne, Dieter Laser as Tötges, and Jürgen Prochnow as Ludwig. The film was also adapted into an American TV film titled The Lost Honor of Kathryn Beck in 1984. 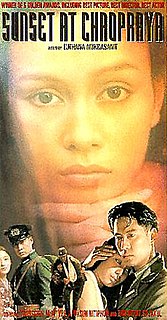 Sunset at Chaophraya is a 1996 romantic-drama film directed by Euthana Mukdasanit. Adapted from the novel Khu Kam by Thommayanti, the story is a love triangle, set in World War II-era Thailand, and depicts the star-crossed romance between an Imperial Japanese Navy officer and a Thai woman who is involved with the Free Thai resistance.

Suwanni Sukhontha was the pen name of Suwanni Sukhonthiang, a Thai writer and novelist. In 1971, she won the SEATO Literature Award, the award which has been succeeded by the S.E.A. Write Award after the dissolution of the SEATO. 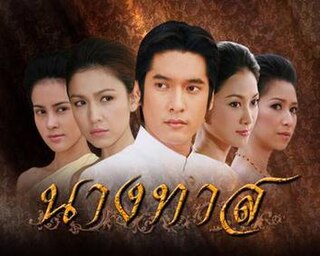 Nang Tard is an award-winning Thai period drama lakorn, remade from a 1993 lakorn of the same name. The lakorn stars Suvanant Kongying and Vee Veerapat in the main roles with several talented actresses such as Pok Piyatida in the role of Khun Ying Yaem and May Bunthita as Boonmee. The story is set in a time when slavery was legal in Thailand.

Princess Nibha Nobhadol, Princess of Uthong, or Somdet Phra Chao Boromwongse Ther Chao Fa Nibha Nobhadol Vimolprabhavadi Krom Khun Uthong Khetkhatiyanari, was the Princess of Siam. She was a member of Siamese Royal Family. She is a daughter of Chulalongkorn, King Rama V of Siam. She served as the personal secretary of her father, King Chulalongkorn, while he did many royal duties. He always wrote the letters while visiting Europe to her, which are all collected in her novel called Klai Baan or Far from home.

Sodsai Pantoomkomol née Vanijvadhana is a Thai actress and teacher of dramatic arts. Also known as Sondi Sodsai from her acting career in the United States during her studies, she returned to Thailand to become a lecturer and associate professor at the Faculty of Arts of Chulalongkorn University, where she founded the Dramatic Arts Department, the first such school in the country. She produced numerous theatrical works throughout her career, and was named National Artist in 2011.

McIntyre v. Ohio Elections Commission, 514 U.S. 334 (1995), is a United States Supreme Court case in which the Court held that an Ohio statute that prohibits anonymous political or campaign literature is unconstitutional. Writing for the Court, Justice Stevens asserted that such action is protected by the First Amendment, and therefore violated the constitutional principle of freedom of speech. Justice Scalia dissented, in an opinion which Chief Justice Rehnquist joined. Justice Ginsburg wrote a concurrence, while Justice Thomas wrote an opinion concurring in the judgment. 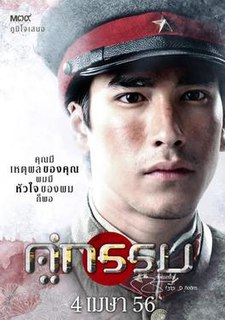 Sunset at Chaophraya in 2013 romantic-war-drama film directed by Kittikorn Liasirikun. Adapted from the novel Khu Kam by Thommayanti, the story is a love triangle, set in World War II-era Thailand, and depicts the star-crossed romance between an Imperial Japanese Navy officer and a Thai woman who is involved with the Free Thai resistance. It was released on April 4, 2013. One of top five box office hits in 2013.

Khunying Vinita Diteeyont, née Vinichayakul, writing under the pen names V. Vinichayakul and Kaew Kao, among others, is an award-winning Thai writer.

Thawiphop is a Thai historical romance novel written by Thommayanti and first published in 1986. It tells the story of Maneechan, a contemporary woman who is transported back in time via a magical mirror to the late 19th century, during the reign of King Chulalongkorn. There she falls in love with a young nobleman, and ultimately ends up helping defend the country against the threat of colonisation by the French and the British.

Lilit Phra Lo is a narrative poem of around 3,870 lines in Thai. Lilit is a poetic form; Phra is a prefix used for royalty and monks; Lo is the personal name of the hero, sometimes transcribed as Lor or Law. Date and authorship are unknown but the work was probably composed in the late fifteenth or early sixteenth century CE and counts among the five earliest works of Thai literature. The plot is a courtly romance that ends with a tragic massacre and political reconciliation. The work has been criticized for portraying feudal indulgence. The story has been repeatedly reworked by prominent novelists and film-makers, often adapting the plot to conform to modern values.

Margaret Lin Xavier or Khun Ying Srivisanvaja, known colloquially as Dr. Lin, was a Thai physician. She was the first Thai woman to receive a degree in medicine. 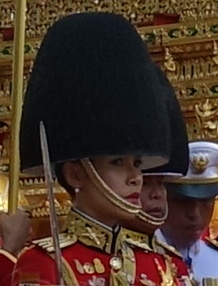 Niramon Ounprom is a former Thai nurse, army officer, and member of the Thai royal court. She was named concubine of Crown Prince Vajiralongkorn of Thailand, who granted her several military ranks and positions, including the noble name of Sineenat Wongvajirapakdi. After Prince Vajiralalongkorn ascended the throne as King Rama X, he appointed her as his Royal Noble Consort, giving her the noble title of Chao Khun PhraSineenat Bilaskalayani in July 2019. She was the first woman to be a concubine of the King of Thailand in almost a century, because the previous kings were monogamous. However, in October 2019, King Rama X issued a royal edict stripping her of all her government, military, and noble ranks, positions, and titles, as well as royal decorations, citing her conflict with and disrespectful conduct towards his wife, Queen Suthida.