Thompson & Odell (ca.1874 – ca.1905) of Boston, Massachusetts, published music and repaired and manufactured musical instruments. Musicians Charles W. Thompson and Ira H. Odell ran the business. [1] They kept a shop on Tremont Street [2] and later on Washington Street. [3] Towards 1900 "Carl Fischer purchased their catalogs of fretted instrument, band and orchestra music. ... About 1905 the Vega Company took over their manufacturing interests." [4]

Gretsch is an American company that manufactures musical instruments. The company was founded in 1883 in Brooklyn, New York by Friedrich Gretsch, a 27-year-old German immigrant, shortly after his arrival to the United States. Friedrich Gretsch manufactured banjos, tambourines, and drums until his death in 1895. In 1916, his son, Fred Gretsch Sr. moved operations to a larger facility where Gretsch went on to become a prominent manufacturer of American musical instruments.

The Vega Company was a musical instrument manufacturer that started operations in Boston, Massachusetts in 1881. The company began under Swedish-born Julius Nelson, his brother Carl, and a group of associates that included John Pahn and John Swenson. The founders had previously worked for a guitar shop run by Pehr Anderberg that made instruments for John C. Haynes, another Boston musical instrument company. Nelson had served as foreman of guitar and mandolin manufacturing at Anderberg's shop. Subsequently, Julius and Carl Nelson bought out the other founding associates and established the Vega company.

Two Broadway theatres have been named the Bijou Theatre.

The Boston Music Hall was a concert hall located on Winter Street in Boston, Massachusetts, with an additional entrance on Hamilton Place.

Nathaniel Briggs Borden was a businessman and politician from Fall River, Massachusetts. He served as a U.S. Representative from Massachusetts's 10th congressional district, with two non-concurrent terms between 1835 and 1843. He later served as a member of the Massachusetts General Court, first as a state Senator, and later a state representative. He also served as the third mayor of Fall River. His business career included interests textile mills, banking and railroads. He was the younger brother of noted land surveyor Simeon Borden.

John Payson Soule (1828-1904) was a photographer and publisher in Boston, Massachusetts, and Seattle, Washington.

Henry Prentiss (1801–1859) manufactured musical instruments, umbrellas and published sheet music, which he sold from his shop on Court Street in Boston, Massachusetts, in the 19th century.

The United States Senate elections of 1904 and 1905 were elections that coincided with President Theodore Roosevelt's landslide election to a full term. Party share of seats remained roughly the same, when including vacancies and appointments, and the Republicans retained a significant majority over the Democrats.

Charles Howard Walker (1857–1936) was an architect, designer and educator in Boston, Massachusetts, in the late 19th and early 20th centuries. He taught at Massachusetts Institute of Technology and was affiliated with Boston's Society of Arts and Crafts. With Thomas Rogers Kimball, he worked as architect-in-chief of the Trans-Mississippi Exposition, 1898.

Frost & Adams (est.1869) was an artists' supply firm in Boston, Massachusetts, located in Cornhill, on the current site of Boston City Hall and City Hall Plaza. It began in 1869 when artist Francis Seth Frost and retailer E.H. Adams bought the business of Matthew J. Whipple. By the 1880s Frost & Adams were "the chief dealers in artists' materials in New England."

Louis P. Goullaud published and sold music in Boston, Massachusetts, in the 19th century. In the 1860s he worked for "Koppitz, Pruefer & Co." With Asa W. White and Edward W. White – as the firm "White & Goullaud" – he sold musical instruments and published sheet music. Under his own imprint he issued sheet music and Goullaud's Monthly Journal of Music. He retired c. 1886, and died in Braintree on December 7, 1919.

John F. Perry & Co. was a music publisher in Boston, Massachusetts in the mid-19th century.

The Park Theatre (est.1879) was a playhouse in Boston, Massachusetts, in the late 19th and early 20th centuries. It later became the State cinema. Located on Washington Street, near Boylston Street, the building existed until 1990. 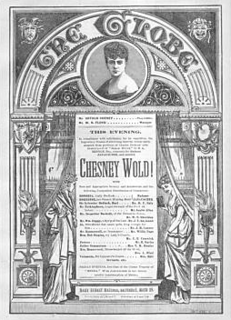 The Globe Theatre (est.1871) was a playhouse in Boston, Massachusetts, in the 19th century. It was located at 598 Washington Street, near the corner of Essex Street. Arthur Cheney oversaw the Globe until 1876. From 1871-1873 it occupied the former theatre of John H. Selwyn. After a fire in May 1873, the Globe re-opened on the same site in December 1874. Architect B.F. Dwight designed the new building. From 1877-1893 John Stetson served as proprietor; some regarded him as "a theatrical producer with a reputation for illiteracy in his day such as Samuel Goldwyn has achieved" in the 1960s. The theatre burned down in January 1894.