Thompson Falls Hydroelectric Dam Historic District is an 80 acres (32 ha) historic district in Thompson Falls which includes six contributing buildings. It is located on the Clark Fork River, on alternate U.S. Route 10, within the northwestern part of Thompson Falls at the Thompson Falls Dam.

It includes the St. Lukes Hospital, a two-story frame building built in 1910, which was the first community hospital in Thompson Falls. [2] 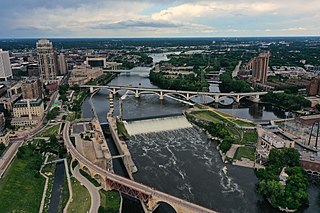 Saint Anthony Falls, or the Falls of Saint Anthony located at the northeastern edge of downtown Minneapolis, Minnesota, is the only natural major waterfall on the Mississippi River. Throughout the mid-to-late 1800’s, various dams were built atop the east and west faces of the falls to support the milling industry that spurred the growth of the city of Minneapolis. In 1880, the central face of the falls was reinforced with a sloping timber apron to stop the upstream erosion of the falls. In the 1950s, the apron was rebuilt with concrete, which makes up the most visible portion of the falls today. A series of locks were constructed in the 1950s and 1960s to extend navigation to points upstream.

The Great Falls of the Passaic River is a prominent waterfall, 77 feet (23 m) high, on the Passaic River in the city of Paterson in Passaic County, New Jersey, United States. The falls and surrounding area are protected as part of the Paterson Great Falls National Historical Park, administered by the National Park Service. The Congress authorized its establishment in 2009. 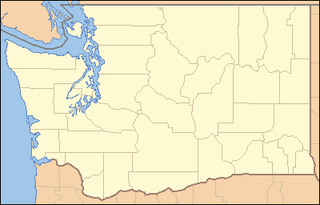 This is a list of properties and historic districts in Tennessee that are listed on the National Register of Historic Places. There are over 2,000 in total. Of these, 29 are National Historic Landmarks. Each of Tennessee's 95 counties has at least one listing.

The Taftsville Historic District encompasses a historic 19th-century industrial village that is mostly in Woodstock, Vermont. Flanking the Ottauquechee River and extending up Happy Valley Road, the area developed around a metal tool factory established by members of the Taft family in 1793. Important elements from its early history include the Taftsville Store, built by the Taft family in 1840, and the Taftsville Covered Bridge, built in 1836. The district was listed on the National Register of Historic Places in 2001.

South Ann Street–Mill Street Historic District is a national historic district located at Little Falls in Herkimer County, New York. The district includes 15 contributing buildings and one contributing structure. They relate to the history of transportation and commercial/industrial development of the city. They include multi-story brick and stone commercial buildings, the former New York Central Railroad passenger station, remains of Erie Canal trunk and aqueduct, and a former hydroelectric power station and remains of the related dam.

Stuyvesant Falls Mill District is a national historic district located in the town of Stuyvesant in Columbia County, New York. The district includes six contributing buildings, five contributing sites, and two contributing structures. They are the industrial sites and power sources from which the adjoining village of Stuyvesant Falls derived its livelihood. It includes the Upper and Lower Falls and mill dams; on the east bank of Kinderhook Creek the sites of a grist mill and paper mill, cotton mill, woolen mill complex and extant hydroelectric plant; west bank operations including three extant 19th century cotton mills and several dwellings. Also included is an iron truss bridge erected in 1899.

Thompson Falls Dam is a dam in Sanders County, Montana, in the northwestern part of the state.

The Salmon Falls Mill Historic District encompasses a historic mill complex on Front Street in Rollinsford, New Hampshire. The complex includes four major structures and seven smaller ones, on about 14 acres (5.7 ha) of land along the Salmon Falls River. They were built between about 1840 and the mid-1860s, and have an unusual architectural unity, for additions made to the buildings were done with attention to matching design elements from the existing structures. The Number 2 Mill, built in 1848, was an early location where a turbine was used instead of a waterwheel to provide power to the mill machinery. The district was listed on the National Register of Historic Places in 1980. 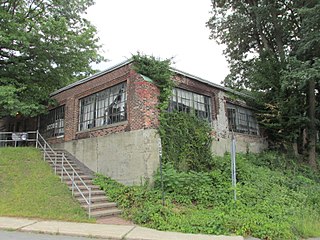 The Moore and Thompson Paper Mill Complex is a major late 19th-century industrial site off Bridge Street in Bellows Falls, Vermont. It is the largest surviving mill complex from the village's industrial heyday, and is one of the largest of the period in the state. It was listed on the National Register of Historic Places in 1984. 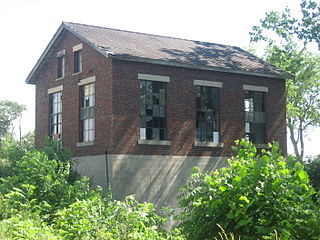 Star Milling and Electric Company Historic District, also known as Star Mill Falls and Star Gristmill, is a historic industrial complex and national historic district located in Lima Township, LaGrange County, Indiana. The district encompasses one contributing building, one contributing site, and two contributing structures. They are a small hydroelectric powerhouse (1929), two dams (1929), and the site of the original 1870 grist mill / hydroelectric generating plant. The old mill generated electric power from 1911 to 1929, and in 1930 the new powerhouse began operation.

The Lockwood Mill Historic District encompasses the only major 19th-century mill complex in Waterville, Maine. Located south of the city's downtown, it was designed by Amos D. Lockwood, a nationally known industrial designer of the period. Its #2 building was for 45 years home to the Hathaway Shirt Company. It was listed on the National Register of Historic Places in 2007.

The Little Falls Hydroelectric Power Plant, on the Spokane River near Reardan, Washington, about 30 miles (48 km) west of Spokane was built during 1907–10. It was listed on the National Register of Historic Places in 1988. The listing included one contributing building and seven contributing structures on 12 acres (4.9 ha). The area spans the border of Lincoln County, Washington and Stevens County, Washington.

St. Anthony Falls in Minneapolis, Minnesota, is the only natural falls on the Mississippi River. Since almost the beginning of settlement in the area by European descendants, the St. Anthony Falls have been used for waterpower. The first allowed settlers were at Ft. Snelling, where construction began in 1820. A sawmill was operating 1821 and a flour mill in 1823. As soon as the land at the sides of the falls became available it was purchased with the intent of using the waterpower of the falls. First lumber mills covered the falls, cutting lumber floated down the Mississippi. After 1870 flour mills started to dominate the area. From 1880 to 1930 the area was the number one flour producer in the US. In later years, some of the power came from steam, but in 1923 half of the waterpower used was for flour milling. Other industries have also used the waterpower.

Seattle Municipal Light and Power Plant, also known as Cedar Falls Historic District, is a public hydroelectric plant near North Bend, Washington operated by Seattle City Light. The plant was the first publicly-owned electrical generating plant for Seattle and one of the earliest in the country for a municipality of its size. It was listed on the National Register of Historic Places in 1997. 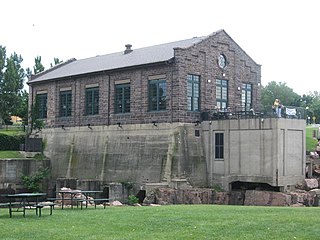 The Sioux Falls Light and Power Hydro Electric Plant, formerly the Northern States Power Building, is a historic building in Falls Park in Sioux Falls, South Dakota. Originally built as a hydroelectric power plant on the Big Sioux River, it now houses the Falls Overlook Cafe. It was listed on the National Register of Historic Places in 1993.