Thompson Mill Covered Bridge is a covered bridge which crosses the Kaskaskia River 2 miles (3.2 km) northeast of Cowden, Illinois. The 160-foot-4-inch (48.87 m) Howe truss bridge is only 10 feet 7 inches (3.23 m) wide, making it the narrowest covered bridge in Illinois. The bridge was constructed in 1868; it was built in Michigan, shipped to Shelbyville, and hauled to the river crossing by horse-drawn wagons. The road the bridge carried was an important transportation corridor connecting Springfield, Taylorville, and Effingham. The bridge also provided area residents access to the Thompson Mill, a corn mill and sawmill which operated from 1843 to 1914. [2]

The bridge was added to the National Register of Historic Places on March 13, 1975. [1] It is now one of only five historic covered bridges remaining in Illinois. The bridge has been closed to automobile traffic but remains open to pedestrians. [3] 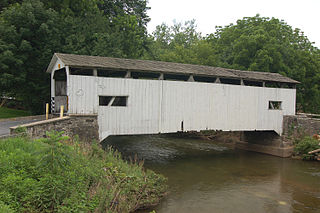 The Keller's Mill Covered Bridge is a covered bridge that spans Cocalico Creek in Ephrata Township, Lancaster County in the US state of Pennsylvania. A county-owned and maintained bridge, its official designation is the Cocalico No. 5 Bridge. It is also sometimes known as Guy Bard Covered Bridge and Rettew's Covered Bridge.

The Siegrist's Mill Covered Bridge is an 88-foot (27 m), Burr Arch Truss covered bridge over Chiques Creek between Rapho and West Hempfield townships, Lancaster County in U.S. state of Pennsylvania. Owned and maintained by the county, its official designation is the Big Chiques #6 Bridge.

Bellows Falls is an incorporated village located in the town of Rockingham in Windham County, Vermont, United States. The population was 3,148 at the 2010 census. Bellows Falls is home to the Green Mountain Railroad, a heritage railroad; the annual Roots on the River Festival; and the No Film Film Festival. 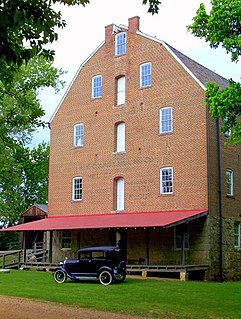 The Bollinger Mill State Historic Site is a state-owned property preserving a mill and covered bridge that pre-date the American Civil War in Burfordville, Cape Girardeau County, Missouri. The park was established in 1967 and offers mill tours and picnicking. It is managed by the Missouri Department of Natural Resources. It includes the Burfordville Covered Bridge, which is listed on the National Register of Historic Places.

The Red Covered Bridge is a wooden, covered bridge that runs over Big Bureau Creek north of Princeton in Dover Township, Bureau County, Illinois. It was originally built in 1863, at a cost of $3,148.57. The 149-foot (45 m) span is one of five remaining covered bridges in Illinois, and it is still open to traffic, though now covered with CCTV cameras. It was once part of the Peoria-Galena Trail.

The Arch in the Town of Marshall, also known as Marshall Arch, is an arch spanning State Road 236 in downtown Marshall, Indiana, United States. The wooden arch has a span of 51 feet (16 m); it is supported by concrete piers and has a clearance of 17 feet 7 inches (5.36 m) at its highest point. Lettering on each side of the arch spells the town's name. The first work by Indiana architect Carroll O. Beeson, the arch was constructed in 1921. The town's business leaders commissioned the arch as a landmark for the town which was intended to improve the appearance of its business district. The arch was formally dedicated on September 30, 1921; the dedication honored the town's World War I veterans, although the arch was not intended to be a memorial. The structure remains in good condition and has become a popular attraction for visitors to the area.

Sugar Creek Covered Bridge is a covered bridge which crosses Sugar Creek southeast of Chatham, Illinois. The Burr truss bridge is 110 feet (34 m) long and 30 feet (9.1 m) wide. The bridge was constructed by Thomas Black; sources disagree on the date of construction, placing it at either 1827 or 1880. The State of Illinois acquired the bridge in 1963 and extensively renovated it two years later. The bridge closed to traffic in 1984 and is now part of a local park with a picnic area. It is one of only five historic covered bridges in Illinois and is the oldest of the remaining bridges.

The Cogan House Covered Bridge is a Burr arch truss covered bridge over Larrys Creek in Cogan House Township, Lycoming County, in the U.S. state of Pennsylvania. It was built in 1877 and is 94 feet 2 inches (28.7 m) long. The bridge was placed on the National Register of Historic Places in 1980, and had a major restoration in 1998. The Cogan House bridge is named for the township and village of Cogan House, and is also known by at least four other names: Buckhorn, Larrys Creek, Day's, and Plankenhorn. 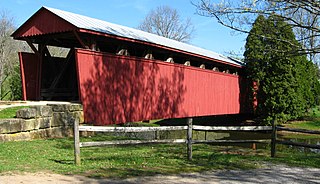 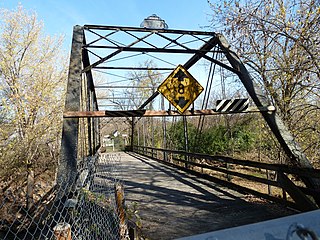 The Clinton Falls Bridge, also known as the Old Mill Bridge and formally as Bridge L-5573, is a historic steel Pratt through truss bridge that spans the Straight River in Clinton Falls Township, Minnesota. It was listed on the National Register of Historic Places in 1997 as Bridge No. L-5573 for having local significance in the theme of engineering. It was nominated for being an example of early steel truss bridge design in Minnesota. 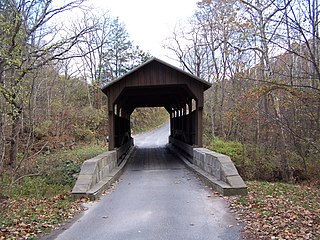 Herns Mill Covered Bridge is a historic covered bridge near Lewisburg, Greenbrier County, West Virginia. It was built in 1884, and is a Queen post truss bridge measuring 10 feet, 6 inches wide and 53 feet, 8 inches long. It has red board-and-batten siding and a galvanized sheet metal roof. It was built to provide access to the S.S. Hern Mill, when it was in operation. It is one of two remaining covered bridges in Greenbrier County, the other being Hokes Mill Covered Bridge.

Mary's River Covered Bridge is a covered bridge which crosses Marys River 4 miles (6.4 km) northeast of Chester, Illinois. The Burr truss bridge is 86 feet (26 m) long and 17 feet 8 inches (5.38 m) wide. The bridge was built in 1854 as part of a plank toll road connecting Chester to Bremen; the bridge allowed agricultural products to be transported to Chester, a significant port on the Mississippi River. In the early 1870s, the toll road and the bridge were sold to Randolph County. The bridge served road traffic until 1930.

The Stone Quarry Bridge is a historic Pratt truss bridge which carries Township Road 1000N across the Embarras River in Coles County, Illinois, near Charleston, Illinois. The bridge is a double-intersection Pratt truss bridge, a variant of the Pratt truss in which the diagonal supports cross multiple panels; it is the only bridge of its type in the county. It is 180 feet (55 m) long, and its eastern and western portals are 14 feet 10 inches (4.52 m) and 16 feet (4.9 m) high respectively. Built in 1883 by the King Iron Bridge Company, the bridge is the oldest truss bridge in the county as well as the oldest bridge in the county which is still open to traffic. 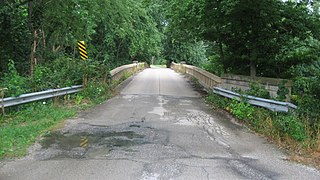 Blakeman Bridge is an arch bridge which crosses the Embarras River in Coles County, Illinois. The concrete bridge is supported by three arches and is 257 feet (78 m) long. The Mercantile Bridge Company built the bridge in 1907. The bridge spanned the river at the site of the first mill and settlement in Coles County. As Illinois Route 130 crosses the river only 200 feet (61 m) upstream, the bridge was used as a detour for that route when its bridge was replaced.

The Kingston Mill Historic District is made up of the Greenland–Brinson–Gulick farm, four nearby houses, the eponymous gristmill powered by the Millstone River, and the Kingston Bridge, an 18th-century stone arch bridge over the river. It was one of the first settlements in Princeton, New Jersey, preceded only by the Quaker community along the Stony Brook.

The Waltmire Bridge is a historic bridge which carried Locust Road across the Mackinaw River 4.9 miles (7.9 km) south of Tremont, Illinois. The bridge was built in 1910 by contractor Edward Cooney at the site of Waltmire's Ford, a shallow point in the river that could only be easily crossed when water levels were low. Both the ford and the bridge were named for local farmer John Waltmire. The bridge has a steel Pratt through truss design, which consists of vertical compression supports and diagonal tension supports. The Pratt truss was a common bridge type in the late nineteenth and early twentieth centuries; the Waltmire Bridge is a relatively long example of the type at 187 feet 6 inches (57.15 m). The bridge, which is now closed to traffic, is one of two surviving metal truss bridges across the Mackinaw River.

Shields' Mill Covered Bridge, also known as Shieldstown Covered Bridge, is a historic covered bridge located in Brownstown Township and Hamilton Township, Jackson County, Indiana. It spans the White River and is a multiple kingpost Burr Arch Truss bridge. It was built 1876, and is a two-span wooden bridge resting on cut limestone pier and abutments. It measures 365 feet, 6 inches, long. The bridge was closed to traffic in 1970. 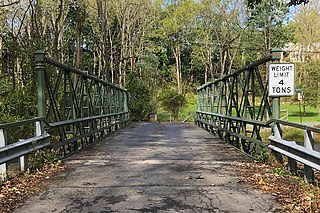 The New Hampton Pony Pratt Truss Bridge is a historic pony Pratt truss bridge on Shoddy Mill Road in New Hampton, Lebanon Township, Hunterdon County, New Jersey. It crosses the Musconetcong River between Lebanon Township, Hunterdon County and Washington Township, Warren County. It was built in 1868 by William Cowin of Lambertville, New Jersey. The bridge was added to the National Register of Historic Places on July 26, 1977 for its significance in engineering, industry and transportation. It was documented by the Historic American Engineering Record in 1991. It was added as a contributing property to the New Hampton Historic District on April 6, 1998.

The Kilgore Mill Covered Bridge and Mill Site, near Bethlehem, Georgia, was listed on the National Register of Historic Places in 1975. The bridge, built in 1894, has also been known as the Bethlehem Bridge, the Apalachee River Bridge, and the Briscoe Mill Bridge