Thompson Pond in Pine Plains, New York is a 75-acre (30 ha) 15,000-year-old glacial kettle pond at the foot of 1,403-foot (428 m)Stissing Mountain. It is the source of Wappinger Creek, a tributary of the Hudson River that drains much of Dutchess County.

The pond and mountain are part of a 507-acre (205 ha) nature preserve managed by The Nature Conservancy. [1] The pond was designated a National Natural Landmark in May 1973 [2] for its calcareous bog, [3] unlike the more common acidic bogs in the Northeast. [4]

Thompson Pond and two other nearby bodies of water, Stissing Lake, and Twin Island Lake, were all originally connected, but separated over time.

The pond is supposedly named for Amos Thompson who settled in the area around 1746. [5]

Thompson pond and Stissing Mountain were the inspiration for the New York State Environment displays in the Warburg Memorial Hall at the American Museum of Natural History built in 1951. [5] [6]

In 1958 the Executive Secretary of the Conservancy, Elting Arnold, convinced Briarcliff Farms to sell the land to the Conservancy for $20,000 which was raised from public donations.

The preserve is open dawn to dusk, every day of the year for passive recreational and educational use. There are hiking trails around the pond and one that goes to the top of Stissing Mountain. There is a firetower at the summit that is open to the public. [7]

There are more than 387 species of plants in the preserve including pipewort, round-leaved sundew, St. Johnswort and cattails. The surrounding woods include oak, sugar maple, ash, hemlock and hickory trees.

The preserve is part of the migratory flyway, over 162 bird species have been spotted here. There are also 27 types of mammals identified in the preserve.

Ell Pond is a kettle hole in Hopkinton, Washington County, Rhode Island. It is surrounded by a swamp of red maple and Atlantic white cypress, and by steep granitic monadnocks. The small area contains communities of both hydrophytic and xeric plants, which makes it ideal for ecological research and education. It was designated a National Natural Landmark in May 1974. In 1972, the Nature Conservancy purchased 50 acres (20 ha) including the pond to extend 218 acres (88 ha) of protected land owned by the Audubon Society of Rhode Island and the 1,002 acres (405 ha) of Rockville Wildlife Management Area owned by the state. The preserve is jointly managed by all three entities. There are hiking trails in the preserve, but Ell pond is specifically not reachable due to its fragile environment.

The Mohonk Preserve is a nature preserve in the Shawangunk Ridge, 90 miles (140 km) north of New York City in Ulster County, New York. The preserve has over 8,000 acres (32 km2) of cliffs, forests, fields, ponds and streams, with over 70 miles (110 km) of carriage roads and 40 miles (64 km) of trails for hiking, cycling, trail running, cross-country skiing, snowshoeing, and horseback riding. It is also a major destination for rock climbers, hosting 50,000 climbers each year who enjoy more than 1,000 climbing routes.

Sam's Point Preserve, or Sam's Point Dwarf Pine Ridge Preserve, is a 4,600-acre (19 km2) preserve in Ulster County on the highest point of the Shawangunk Ridge in New York, on the Wawarsing, New York-Shawangunk town line. It is owned and managed by the New York State Office of Parks, Recreation and Historic Preservation after having previously been managed by The Nature Conservancy. Its unique environment features dwarf pitch pine trees along the ridgetop. Located within the park is Lake Maratanza, the highest lake on the ridge, and the Ellenville Fault Ice Caves.

Volo Bog State Natural Area is a nature reserve in Illinois, United States, preserving Volo Bog. The bog was designated a National Natural Landmark in 1973 as the only remaining open-water quaking bog in Illinois. The site also contains woodlands, savanna, marshes, prairie restoration areas, shrubland and old fields. Maintained by the Illinois Department of Natural Resources, the site is located about a mile west of U.S. Route 12 between the towns of Volo and Fox Lake, Illinois.

Brown's Lake Bog is a dedicated Ohio state nature preserve owned by The Nature Conservancy. It is one of the few remaining kettle peatlands in the U.S. state of Ohio. It has a kettle lake, kame, and a floating sphagnum moss mat. Public visitation is allowed. 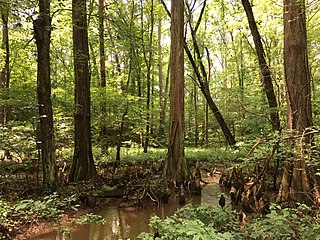 Battle Creek Cypress Swamp (BCCS) is a forested wetland near Prince Frederick in Calvert County, Maryland, United States. It is one of the northernmost sites of naturally occurring bald cypress trees in North America, and the only large stand of the trees on the western shore of Maryland. In 1965, the National Park Service designated the BCCS a National Natural Landmark.

Lake Agassiz Peatlands Natural Area is a 25,411-acre (10,283 ha) National Natural Landmark located in Koochiching County, Minnesota. Designated in November 1965 under the Historic Sites Act, its ownership and oversight are provided by the National Park Service of the United States. This designation from the United States Secretary of the Interior, gives it recognition as an outstanding example of the nation's natural history. The designation describes it as

An example of the extensive peatlands occupying the bed of ancient glacial Lake Agassiz, illustrating the process of peat accumulation over about 11,000 years. The area contains Myrtle Lake Bog, which developed contrary to the usual successional process of lake filling, and is an excellent example of both raised and string bogs. 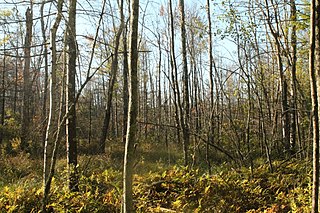 Bear Swamp Preserve is a Nature Conservancy preserve and National Natural Landmark in Westerlo, New York. It consists of a pond and surrounding 310 acres (1.3 km2) of swamp and woodland. It is recognized for its great laurel tree population. It has two nature trails totaling about two miles (3.2 km) in length.

Moss Lake Bog is an 84-acre (34 ha) site containing a 15-acre (6.1 ha) glacial kettle lake located in the town of Caneadea, New York, outside Houghton. Over time, sphagnum moss has grown over the open water, turning it into an acidic bog. It is managed by The Nature Conservancy as part of Moss Lake Preserve, and was declared a National Natural Landmark in 1973. 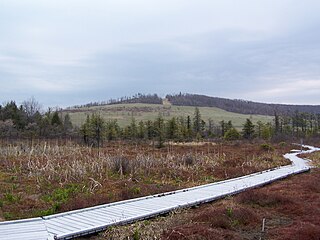 Cranesville Swamp Preserve is a 1,600-acre (650 ha) preserve situated in Preston County, West Virginia and Garrett County, Maryland. It is one of the few remaining boreal bogs in the southern United States, unusual in harboring many plants and animals that are normally only seen in more northern climates.

The Lime Hollow Center for Environment and Culture is a nature preserve project in Cortland County, New York. It was founded in 1993 as the Lime Hollow Nature Center, the culmination of efforts 20 years earlier to develop a nature preserve to protect an unusual assemblage of marl ponds, a peat bog, and kame-and-kettle topography along an abandoned railroad right of way in Lime Hollow, just west of the city of Cortland. 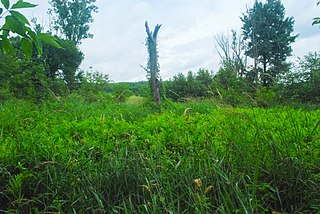 Summerton Bog is a bog in Marquette County, Wisconsin. The bog provides a habitat for several rare species of plantlife and wildlife. It is owned by The Nature Conservancy and contains 428 acres (173 ha). The bog was designated a Wisconsin State Natural Area in 1966 and a National Natural Landmark in 1973.

Pigeon River Fish and Wildlife Area is a protected area that covers 12,134 acres (4,910 ha) and is dedicated to providing hunting and fishing opportunities. The area includes 529 acres (214 ha) of lakes and 17 miles (27 km) along the Pigeon River. It is located on Indiana State Road 3, near Mongo in Lagrange County, Indiana. The Fish and Wildlife Area contains Tamarack Bog Nature Preserve, a 150-acre (61 ha) wetland parcel that has been designated as a National Natural Landmark. 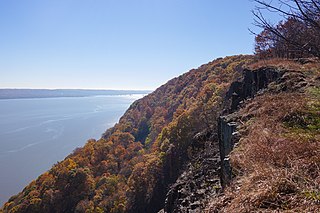