Thompson Springs, also officially known for a time as just Thompson, is a small census-designated place in central Grand County, Utah, United States. The population was 39 at the 2010 census. [3] The town is just north of the east-west highway route shared by Interstate 70, U.S. Route 6 and U.S. Route 50, between Crescent Junction and Cisco. Moab, the county seat, is 37 miles (60 km) to the south. Thompson Springs is located in high desert country at an elevation of 5,246 feet (1,599 m), with the Book Cliffs just to the north. The town's ZIP code is 84540. [4]

Evidence of human habitation or use of the Thompson Springs area can be dated back to the Archaic Period, when beautiful pictographs were left in Thompson Canyon. Subsequent Anasazi, Fremont, and Ute tribes have also left their mark upon the area. The site of this rock art in Thompson Canyon has been designated as the Thompson Wash Rock Art District.

Thompson Springs was named for E.W. Thompson, who lived near the springs and operated a sawmill to the north near the Book Cliffs. [5] [6] The town began life in the late nineteenth century as a station stop on the Denver and Rio Grande Western Railroad (D&RGW), which had been completed through the area in 1883. A post office at the site was established in 1890, under the name "Thompson's". (The official designation by the United States Postal Service is still "Thompson".) [7] The town was a community center for the small number of farmers and ranchers living in the inhospitable region, and it was also a prominent shipping point for cattle that were run in the Book Cliffs area. Stockmen from both San Juan and Grand counties used Thompson.

Thompson gained importance in the early twentieth century due to the development of coal mines in Sego Canyon, north of town. Commercial mining in Sego Canyon began in 1911, and that year the Ballard and Thompson Railroad was constructed to connect the mines with the railhead at Thompson. The railroad branch line and mines continued operating until about 1950.

For many years the city was served by various D&RGW passenger trains, including the Scenic Limited , the Exposition Flyer , the Prospector , the California Zephyr , and the Rio Grande Zephyr . Although Amtrak (the National Railroad Passenger Corporation) took over nearly all passenger rail service in the United States in 1971, the D&RGW continued service through the area until 1983. Subsequently, for the next fourteen years, the city was served by various Amtrak trains, including the California Zephyr, the Desert Wind , and the Pioneer .

Construction of I-70 two miles south of Thompson Springs drew traffic away from the city as the former Old Cisco Highway (US 6 and US-50) [8] (now named Frontage Road) was no longer used. The later movement of the passenger train stop about 25 miles (40 km) to the west in Green River (Green River station) in 1997 led to further economic hardship for Thompson Springs. [Note 1]

The original name for this settlement was "Thompson Springs", a name that was reinstated in 1985. [9] Much of the town is uninhabited today, although there are still some operating businesses in the immediate vicinity of I-70. [12]

The Moab Uranium Mill Tailings Remedial Action (UMTRA) Project is a uranium tailings removal and relocation project that promises to bring jobs to the area as tailings from the Atlas Mineral Company's tailings ponds outside of Moab will be moved to Crescent Junction, about 6 miles (10 km) west of Thompson Springs. [13]

The Thompson Wash Rock Art District (which is also referred to as the Sego Canyon Rock Art Interpretive Site by the Bureau of Land Management) is an archeological site located in Thompson Canyon (about 3.5 miles [5.6 km] north of Thompson Springs) that was named after Thompson Wash and is listed on the National Register of Historic Places. The district includes several well-preserved groups petroglyphs (images etched into the rock surface) and pictographs (images painted onto the rock surface) left by early Native Americans in three different styles (each with their own panel): Fremont, Ute and Barrier Canyon. [14] [15] As such it provides fairly rare opportunity to compare all three the styles in one location, [16] particularly a site that is easily accessible. [17] Some of the images may date back more than 4000 years. [18] The Fremont culture thrived from A.D. 600 to 1250 and was contemporary with the Anasazi culture of the Four Corners area. The Archaic period dated from 7000 B.C., while the Barrier Canyon period from around 400 A.D., and the Ute tribe dating from A.D. 1300.

Emery County is a county in east-central Utah, United States. As of the 2010 United States Census, the population was 10,976. Its county seat is Castle Dale, and the largest city is Huntington. 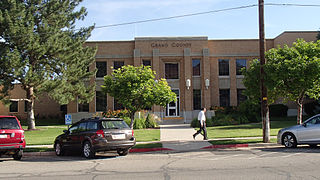 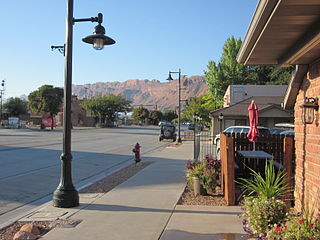 Moab is a city on the southern edge of Grand County in southeastern Utah in the western United States, known for its dramatic scenery. The population was 5,046 at the 2010 census, and in 2018 the population was estimated to be 5,322. It is the county seat and largest city in Grand County. Moab attracts many tourists annually, mostly visitors to the nearby Arches and Canyonlands national parks. The town is a popular base for mountain bikers who ride the extensive network of trails including the Slickrock Trail, and for off-roaders who come for the annual Moab Jeep Safari. 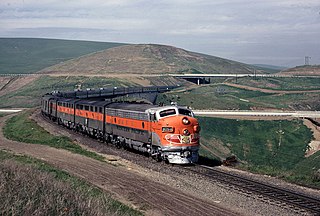 The California Zephyr was a passenger train that ran between Chicago, Illinois and Oakland, California via Omaha, Denver, Salt Lake City, Winnemucca, Oroville and Pleasanton. It was operated by the Chicago, Burlington & Quincy (CB&Q), Denver & Rio Grande Western (D&RGW) and Western Pacific (WP) railroads, all of which dubbed it "the most talked about train in America" on March 19, 1949, with the first departure the following day. The train was scheduled to pass through the most spectacular scenery on its route in the daylight. The original train ceased operation in 1970, though the D&RGW continued to operate its own passenger service, the Rio Grande Zephyr, between Salt Lake City and Denver, using the original equipment until 1983. In 1983 a second iteration of the California Zephyr, an Amtrak service, was formed. The current version of the California Zephyr operates partially over the route of the original Zephyr and partially over the route of its former rival, the City of San Francisco.

The Denver and Salt Lake Railway (D&SL) was a U.S. railroad company located in Colorado. Originally incorporated in 1902 as the Denver, Northwestern and Pacific (DN&P) Railway, it had as a goal a direct connection of Denver, Colorado, with Salt Lake City, Utah. It underwent numerous reorganizations throughout its financially troubled history and by the time the company was acquired in 1931 by the Denver and Rio Grande Western Railroad, it had advanced only as far as Craig, Colorado. After the acquisition the line was connected to the D&RGW main, and used to give the D&RGW a more direct route to Denver. The portions of the railroad still in use today are known as the Moffat Tunnel Subdivision of Union Pacific Railroad's Central Corridor. Amtrak’s California Zephyr service from Denver to Glenwood Springs follows much of the old D&SL route. 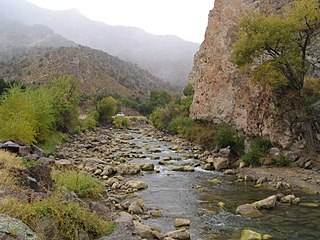 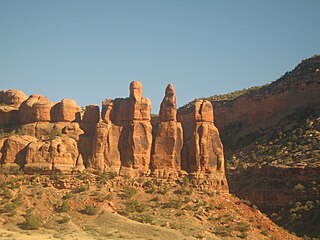 Ruby Canyon is a roughly 25 mile (40 km) long canyon on the Colorado River located on the Colorado-Utah border in the western United States, and is a popular destination for rafting. The canyon takes its name from the red sandstone cliffs which line the canyon walls. 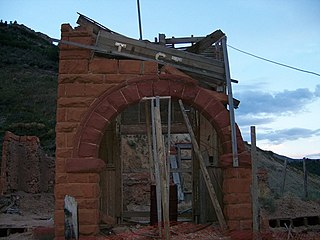 Thistle is a ghost town in Spanish Fork Canyon in southeastern Utah County, Utah, United States. During the era of steam locomotives, the town's primary industry was servicing trains for the Denver and Rio Grande Western Railroad. The fortunes of the town were closely linked with those of the railroad until the changeover to diesel locomotives, when the town started to decline. 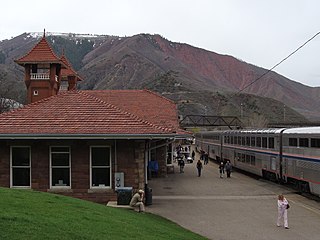 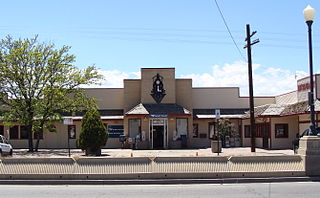 The Grand Junction station is a train station in Grand Junction, Colorado, United States, that is served by Amtrak's California Zephyr, which runs once daily between Chicago and Emeryville, California, in the San Francisco Bay Area. 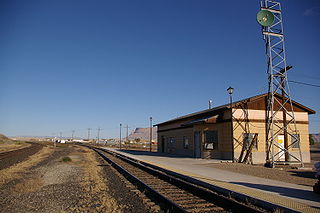 The Green River station is a train station in Green River, Utah. It is served by Amtrak's California Zephyr, which runs once daily between Chicago and Emeryville, California, in the San Francisco Bay Area. The station has a platform and bus-stop style shelter and no services.

Crescent Junction is a small unincorporated community within Grand County in the eastern part of the U.S. state of Utah. The community is located at 4,882 feet (1,488 m) above sea level. Crescent Junction is the more common name of the town for road transport, as the name of junction of Interstate 70 and U.S. Route 191 in Utah law, while Brendel is more common in rail transport, as the name given by the Denver and Rio Grande Western Railroad to rail siding and junction at the same location. 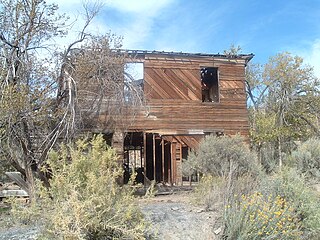 Sego is a ghost town in Grand County, Utah, United States. It lies in the narrow, winding Sego Canyon, in the Book Cliffs some 5 miles (8.0 km) north of Thompson Springs. Formerly an important eastern Utah coal mining town, Sego was inhabited about 1910–1955. The town is accessed via the grade of the Ballard & Thompson Railroad, a spur from the Denver and Rio Grande Western built by the founders of the town to transport the coal. 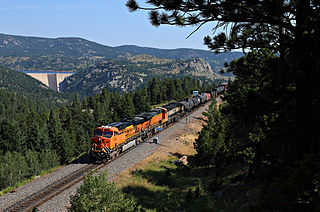 The Central Corridor is a rail line operated by the Union Pacific Railroad from near Winnemucca, Nevada to Denver, Colorado in the western United States. The line was created after the merger with the Southern Pacific Transportation Company by combining portions of lines built by former competitors. No portion of the line was originally built by the Union Pacific; in fact, some portions were built specifically to compete with the Union Pacific's Overland Route. The line is known for significant feats of engineering while crossing the Wasatch Mountains of Utah and the Rocky Mountains of Colorado. The line features numerous tunnels, the longest and highest of these is the Moffat Tunnel. 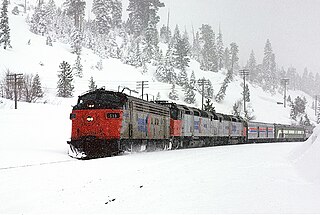 The San Francisco Zephyr was an Amtrak passenger train that ran between Chicago and Oakland from June 1972 to July 1983. 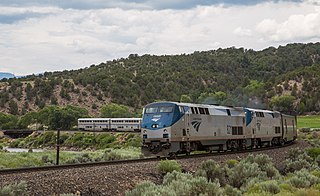 The California Zephyr is a passenger train operated by Amtrak between Chicago and the San Francisco Bay Area, via Omaha, Denver, Salt Lake City, and Reno. At 2,438 miles (3,924 km), it is Amtrak's longest daily route, and second-longest overall after the Texas Eagle's triweekly continuation from San Antonio to Los Angeles, with travel time between the termini taking approximately 51​1⁄2 hours. Amtrak claims the route as one of its most scenic, with views of the upper Colorado River valley in the Rocky Mountains, and the Sierra Nevada. The modern train is the second iteration of a train named California Zephyr; the original train was privately operated and ran on a different route through Nevada and California.